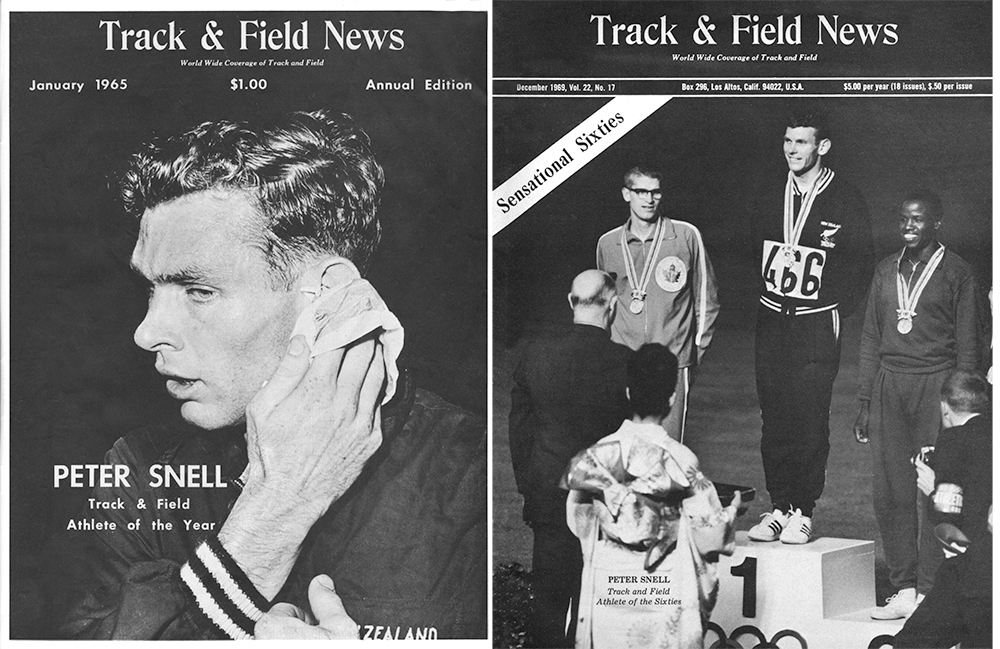 WHEN THE WA (then IAAF) launched its Hall Of Fame in 2012, one of the members of the charter class was Peter Snell. And why not? New Zealand’s middle distance star of the ’60s had indeed been one of the giants of the sport. T&FN recognized him as such, twice voting him our Athlete Of The Year (’62 & ’64) and in ’69 according him the honor of Athlete Of The Decade. Below you’ll find a précis of how his stunning career played out.

Hall Of Famer Peter Snell was born in Opunake, New Zealand, and died of heart failure just 5 days shy of his 81st birthday in Dallas, Texas. Coached by the legendary Arthur Lydiard, Snell went on to win the Olympic 800 twice (’60 & ’64), the second of them as part of an 800/1500 double. When Snell was 19, Lydiard told him, “Peter, with the sort of speed you’ve got, if you do the endurance training, you could be one of our best middle-distance runners.”

Almost a decade after his running career was over, Snell came to the States and earned an undergraduate degree at UC Davis before moving on to Washington State where he was awarded his graduate degrees, including a PhD in Exercise Physiology. As Dr. Snell he went on to do research work at the University of Texas Health Sciences Center in Dallas.

In the run-up to the Rome Olympics in September of 1960, T&FN had an international panel of 6 experts handicap the Games by picking 6-deep in each event. The name Peter Snell did not appear in that charting; why would it? He was only =No. 23 on the yearly list, having set a PR 1:49.2 for 880y (worth 1:48.5) way back in mid-February. He then came from about as far off the radar as any Olympic champion before or since.

And he did it with a sequence of races that today’s 2-lappers couldn’t envision, with 4 races on 3 consecutive days. That’s right, heats & quarterfinals on the same day, with the semis the next day and the final the day after that. The 21-year-old novice handled the load with aplomb, lowering his PR to 1:48.1 in his heat, almost matching his pre-meet PR with 1:48.6 in his quarter, dropping his PR to 1:47.2 in his semi and then scorching another lifetime best with an Olympic Record 1:46.3 in the final, missing the WR by just 0.6.

Snell then revealed that he had been sent to the Games for experience, grooming him for the Tokyo 1500 to come 4 years later. “Four races at close interval is what I needed to realize my potential,” he said. In New Zealand I usually lacked competition. Here it was only after the semi that I began to dream. Warming up I told [Kiwi thrower] Val Sloper that I was looking forward to seeing the expression on [WR holder Roger Moens] face at the tape. But I never really expected to win.”

If there were any lingering doubts about Snell’s potential greatness he quashed them 2 weeks later at the U.S. vs. Commonwealth dual meet in London. At a time when the 880y WR was 1:46.8, Snell anchored the Commonwealth squad with an unreal 1:44.8 (worth 1:44.1 for 800).

The post-Olympic year, with no international championships to point for in an era with no professional circuit found Snell absorbing early-season losses at home before a successful unbeaten tour in Europe. He co-led the yearly 2-lap list at 1:46.4 and earned another No. 1 in the World Rankings. And he also anchored a Kiwi 4 x Mile squad to a World Record.

A week after that Snell took the long flight from Auckland to Los Angeles, arriving the night before the staging of the big LA Times undercover meet. The next morning he saw an indoor track for the first time while it was still being constructed. That night, stepping on a banked board oval for the first time he led from tape to gun, lowering the WR from 2:07.9 to 2:06.0 (he also claimed the 880 WR at 1:50.2 en route).

Coming into Tokyo as the unanimous favorite in both the 800 and 1500, Snell came through in stirring fashion running 6 races in 8 days, even though he expressed doubts about his status on the eve of the Games. “Not until I have completed my training can I have an idea whether I can do as well in the 800 as I hope to do in the 1500. If I don’t concentrate on one race I might miss both.”

The 800 came first. It was only a 3-round race this time out—run on consecutive days—and it turned out Snell’s training had gone very well as he crushed his Olympic Record with a 1:45.1. That despite finding himself precariously hemmed-in halfway through the race (“I was very worried; I hadn’t been boxed as badly as that before”).

The very next day was the 1500 heats, follow by a day’s break to the semis and another to the final. Cordner Nelson’s T&FN story said it all with the opening paragraph: “One of the greatest footraces of all time was this race… for 2nd place. Peter Snell so outclassed a strong field that the final result reads like a separate race.” The second gold was his, by a whopping 1.5 seconds.

1965: A Wondrous Career Winds Down

In our story naming him as the ’64 AOY, we said, “If Peter Snell is not the greatest middle distance runner in history, he certainly presents an impressive argument.” ◻︎