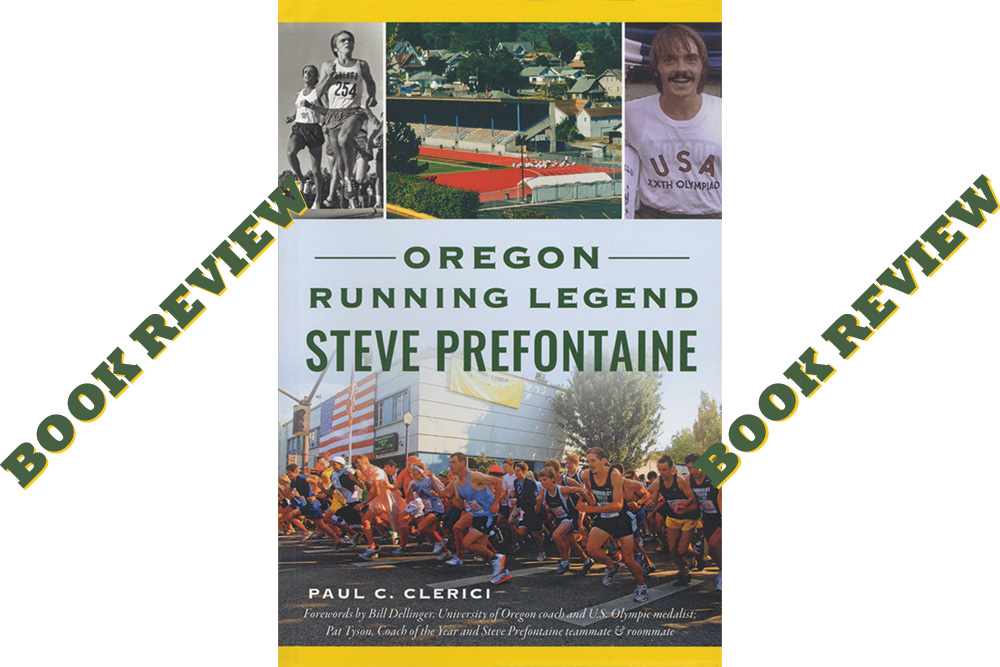 47 YEARS AGO, Steve Roland Prefontaine was killed in an automobile accident on Skyline Boulevard in Eugene. At the time he was 24 years old, just 6 years out of high school. Almost 50 years later, the legend of Pre lives on, just as strong as ever.

The running accomplishments, the brash public persona, the activist for athletes’ rights, and perhaps above all the hero dead long before his time — with so much promise unfulfilled — that combination continues to capture the public imagination. And undeniably, win or lose, the man generated excitement, energized the fans.

His name lives on in a Diamond League track meet, a building on the Nike campus in Beaverton, a running trail in Eugene, and a student apartment building near the UofO campus, among other memorials.

This new book Oregon Running Legend Steve Prefontaine by Paul C. Clerici — is a curious entry in the writings about Pre. The chapters seem independent of one another, which leads to an annoying repetitiveness. In Chapter 7, near the end of the book, we read: “Tragically, about 4 hours later, he died in a car accident on Skyline Boulevard, just outside UO. He was 24.” We have read this sentence with similar phrasing three or four times previously in the book. A good editor would have cleaned this up.

And do we need to have the full condolence message to the Prefontaine family from President Gerald Ford printed twice in its entirety?

Another curiosity is Clerici’s insistence on including the street addresses of sites Pre had some sort of connection with. Now this is useful if you are offering a pilgrimage guide to Pre’s holy places in Coos Bay and Eugene for die-hard Pre groupies. But “San Diego Sports Arena, 3500 Sports Arena Boulevard, in San Diego” and “Modesto Junior College, 435 College Avenue, Modesto, California,” just to name a couple? Why? What purpose does this serve? Again, good editor needed.

OK, I apologize to all those fans who will welcome anything written about The Man. And there is some good information, aside from the fairly perfunctory recounting of Pre’s exploits on the track.

Chapter 2: “Coos Bay, Hometown, High School, Memorials…” does provide a guide to those who wish to make that hajj to Mecca and visit the plaques, the monuments, the museum displays, Marshfield High School, and all the other hagiological sites, complete with street addresses for the internet-challenged. You can even book a 7-hour private tour conducted by Steve’s sister Linda.

Another informative chapter is on the making of the movies, Prefontaine with Jared Leto (’97) and Without Limits with Billy Crudup (’98). Clerici misidentifies Robert Towne as an “Academy Award-winning director (Chinatown)” when in fact Roman Polanski directed that one; Towne wrote the screenplay (which did win the Oscar). Commentary by Pat Tyson who consulted on both films makes good reading.

Tyson, who roomed with Pre in their student days, contributes a foreword, as does Bill Dellinger.

A lot can be said about Pre’s place in track & field history. Certainly, he has a prominent position in American annals, but the fact is he was never World Ranked higher than No. 4 in the 5000. Of course he was young when he died, so we might speculate on what his Olympic fortunes might have been had he lived.

Well, it’s not likely that he would have beaten Viren, the ultimate peaker, in ’76, and then the U.S. boycotted the ’80 Games. His best chance then was Los Angeles ’84, when he would have been 33. Not necessarily over the hill for the 5000, but could he have beaten Saïd Aouita? Maybe; we’ll never know.

Whatever, such speculation is not terribly important. Whatever he had, we fans responded and do not forget him. Those “Stop Pre” t-shirts were done mostly to poke fun at the “Go Pre!” groundswell that captured Hayward Field at the time. And also perhaps to gently take “his cockiness” down a peg and bring him back to earth a bit. It’s all part of the legend, the legend that continues to live on, and on.

Oregon Running Legend Steve Prefontaine by Paul C. Clerici, is published by The History Press, Charleston, SC. The list price is $23.99, and it’s available from amazon.com.