On December 13, the Athletics Integrity Unit (AIU) announced a 3-year ban on sprinter Randolph Ross for whereabouts violations and tampering. His suspension runs through June 30, 2025 and will cause him to miss the ’24 Olympics.

THE FIRST WORDS out of Randolph Ross’s mouth in our exclusive interview with the now-suspended Olympic relay gold medalist are: “The whole thing came down to being my fault.”

The North Carolina A&T star isn’t shy about taking accountability for his run-in with the AIU, but he admits he has some bitterness about the way things played out. “It’s not about whether the test comes back negative or not. It was about the paperwork that wasn’t filed correctly, basically.”

The first whereabouts violation came on April 14, 2022, as a result of Ross’s neglecting to update his information to show that he would be in Gainesville, Florida, that day preparing to compete in the Tom Jones Memorial. No argument there.

The second miss is more contentious. Once again, he failed to update his whereabouts, saying he was caught up in the excitement of returning to the NCAA Championships in Eugene, where he defended his 400 title and made All-America in the two relays. In his appeal, he says, he offered AIU the results of his drug test in Eugene, but the appeal was rejected. “Everybody knows where I was. They came [to his home] on the day between my prelims and the finals… If you’re a program to help the athletes, if it was really about drug testing and making sure everybody’s clean, then they would’ve just come to the meet. They had people at the meet. It was not like they couldn’t find somebody. According to them, it was the information we log into the app.”

The third miss is where things get complicated. Ross says he updated his whereabouts through his phone app. However, he says, “It actually turns out that when you update them on the 15th, the information doesn’t roll over until the beginning of the next month.” He was in the process of moving from Greensboro, North Carolina, to Knoxville, Tennessee, where he had intended to finish out his collegiate eligibility running for the Vols.

Somehow, he says, USADA got the memo on the move; the AIU did not. USADA showed up at his new address in Knoxville to administer a test. The next day, says Ross, AIU showed up at his old address in Greensboro, where he no longer lived. Strike three.

As a top-tier athlete, Ross had been placed in the AIU testing pool, meaning he was subject to out-of-competition tests by the AIU in addition to those already coming from USADA. He says, “It was coming down to me getting tested three times a week.” He adds that, “We talked to [an AIU official], they’re like, ‘It’s random.’ And they kept trying to blame it on us, ‘Since you won a gold medal, you’re higher on the priority list.’ But I’m getting tested at every single meet I go to. I’m getting tested twice, almost twice a week. Then when it came down to the third test, they tested me on back-to-back days. I got tested that Thursday and they came back that Friday [The AIU release says the third missed test was Saturday, June 18]. How are they putting a limit on how many tests we can miss, but not putting a limit on how many tests they can take?”

For the record, the USADA website show Ross was tested 6 times in 2022, with four of those falling in the second quarter (April-June). The AIU doesn’t publicly show an athlete’s testing record.

On top of his whereabouts failures, Ross was charged with “tampering or attempted tampering with any part of Doping Control by an Athlete.” In his case, it was an e-mail he sent as part of his appeal, where he apparently changed a crucial date.

The tampering charge typically carries a bigger penalty (4 years) than that for a whereabouts failure. The AIU treated both cases as a single first-time violation and gave Ross the bigger penalty, reducing it to 3 years ostensibly because of his full admission and cooperation. He also loses his results from the USATF Championships, where he placed 3rd in 44.17, making the Worlds team.

Ross says, “It really came down to when I got that final test, I mean missing it, and they e-mailed me when I got to Tennessee saying I missed the third one… So I sent an e-mail regarding the whereabouts, and that one wasn’t correctly dated, as in I changed the date I was tested to where I changed my address.”

The e-mail in question was the system-generated confirmation e-mail that is sent out after an athlete changes their address in the testing app. Ross apparently altered the date in an effort to show that he had made his address change on time.

He offers no excuses. “You’ve got to input your whereabouts and keep going. Especially when you’re still in school and then you’re leaving every week, classes and everything, and then they don’t come in your window of availability.

“I understand it’s still new, so they still have some things to work out, but we ended up missing that last one. And then I changed the e-mail to try to backdate it because I thought, when I updated my whereabouts on the 15th, that they would automatically go into the system on the 15th since that was the deadline… I was thinking since I inputted it, they would have the new information.

“The day after I changed it, they came to my new address. So I was like, okay, they got the new information and everything. And then the next day the AIU came to the old address and they were saying that the information wasn’t changed properly.”

Ross says he even installed a Ring doorbell on his residence, an added safeguard that would allow him to be remotely notified if anyone showed up at his place. “So if they ring it, I can see and talk to them. They come, they don’t ring the doorbell, they don’t call you. They knock on the door and if you don’t answer, they just sit there and just wait, and if you don’t come you miss it.”

The announcement of his provisional suspension came on July 16, the day before Ross was scheduled to run in the 400 prelims at the World Championships.

Until now, Ross has maintained his silence. He now reveals that he was told to, the message relayed from an unnamed USATF representative, who allegedly said to not talk to the press or the suspension might be much longer: “They were trying to hang a penalty over our head and say if we said anything, the situation could go worse and it could reach up to 6 years.”

Though Ross says he was informed in a July 14 meeting at the Worlds of his provisional suspension and the likely penalty, he says he is frustrated by the delay in the announcement until December. Whether through coincidence or bad intent, the release was scheduled just two days before the USTFCCCA’s Bowerman Award presentation, with Ross in Denver as one of the candidates. “It’s been what, almost 6 months now? It took basically forever to figure out what they want to do. It seemed like they were just trying to stretch out their time period until the event came up.”

At this point, the planned conclusion of Ross’s collegiate career at Tennessee will not happen. He says he lost his scholarship. Though the NCAA is not a signatory to WADA, Ross has been told it does not allow a student-athlete to compete if they are under a drug suspension from a national or international governing body. He is appealing that consequence, since his ban was not for an actual doping positive but for the whereabouts failure and the e-mail tampering. (Currently, in a somewhat similar case, a Stanford swimmer has been removed from the school’s roster after a 1-year ban for whereabouts violations.)

In total, the career ramifications of the whole episode for Ross are huge. Without it, it’s likely he would have signed a lucrative pro contract in the next year or two. He will miss the Paris Olympics. He will not compete again till after June 30, 2025.

Where does he go from here? Ross is still just 21. He will be 24 when he comes off his suspension.

Until then, he plans to finish his finance degree at North Carolina A&T. Soon he will take a test for a realtor’s license. And he will keep training, though he is not allowed to train with any athletes or coaches affiliated with USATF. The exception is that he is still allowed to be coached by his father, Duane Ross, because of their familial connection.

Yet despite the set-back, the soft-spoken Ross is philosophical about it all. “I most definitely learned a lot from the situation,” he says. “I know in the end I made the wrong decision, but at the same time I don’t really regret it because in the end I learned a lot more. You can kind of see how athletes aren’t really favored even though we run the sport. Well, technically, we don’t even run the sport. It’s everyone else in the background.

“It’s most definitely a learning experience. It’s not the best one, but it shows that track can’t be the only thing in my life. I need to go ahead and start working for whatever I have afterwards because track isn’t going to last forever. I’ve gotta have a plan for something else.

“Right now, I’m finishing school. I’ll continue to practice and train, but not as heavily as when we were competing. Once I finish school this semester, I’ll probably end up moving back up to Tennessee. If I’m going to be training, I was going to speak with my dad and see how the whole coaching field works. I know I can’t race and everything, but they didn’t say I can’t still be out there and help.”

When asked whether he might face stigma for the rest of his career because of the suspension, Ross says, “I was never really a fan favorite. I mean, coming from an HBCU, we were being accused for drugs while we were in school. I mean, everybody has their own opinion and perspective, but at the end of the day, I’m being paid for what I like to do and you’re criticizing me from the outside. So it just doesn’t really bother me that much.”

Missing the Paris Olympics, he says, is not a devastating blow for him, in light of his ’21 trip to the Tokyo Games: “Being there and seeing how it operated, I’m not sure if it was just COVID or anything, but the experience, like politically, in Tokyo wasn’t the best, so I don’t really miss that environment.

“The worst part for me will probably be the traveling that I’m missing. At the same time, it’s not like everything ended or everything’s over. It’s gonna come eventually, so I gotta be patient.”

The suspension, he says, “Might be better off for me in the long run. I finally get a chance to sit down. I mean these past 2-3 years have been indoor collegiate, outdoor collegiate, then post-collegiate for the Worlds, the Olympics. Basically it’s been non-stop running for the past 2-3 years. This would be a good time to shut it down, take a break, and then by the time we do get back, I’ll be 24. So that’s like the prime age for runners? Then we’ll be ready to go and we’re already running 43 now, so we’ll just wait to see what happens then.” 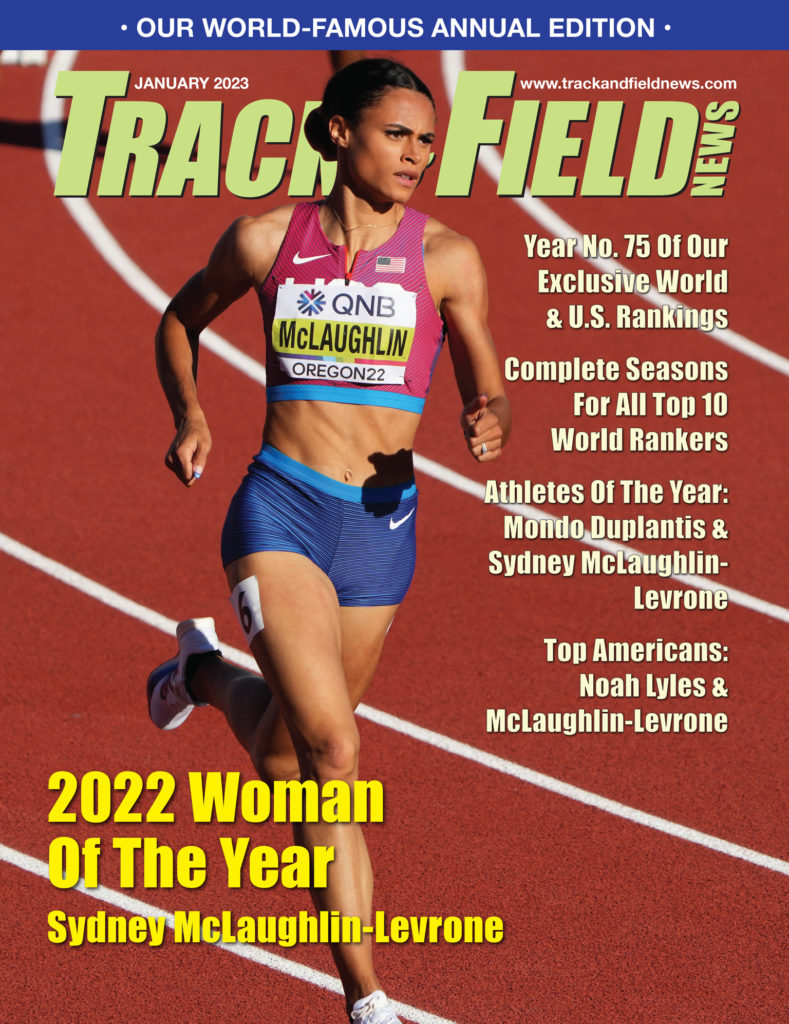