HERE’S THIS MONTH’S collection of short takes on generally off-track activities that have gone a long way towards shaping the way the sport is headed.

Shortly after Mondo Duplantis got his first World Record of the winter in Toruń, Poland, Sam Kendricks went to work about 1000M west in Rouen, France. He too claimed a record—his of the American variety—with a third-try clearance of 19-8½ (6.01). That upped the official AR of 19-8¼ (6.00) set by Jeff Hartwig in ’02. Kendricks remains behind Hartwig on all-time lists, however. As part of a hot streak in that ’02 campaign, Hartwig had followed up his 19-8¼ (6.00) with meets of 19-8½ (6.01) and 19-9 (6.02). The requisite paperwork never made it to USATF, so while both are recognized as statistically viable, neither was ever ratified as a record.

And In The Sharp-Eyed Reader Department… 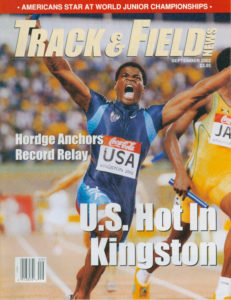 A note from Evan Davis of Geneva, Switzerland: “How many people realize that Usain Bolt was on the cover of T&FN as early as September 2002—and not first in 2003, as you cited recently in your ‘10 Questions with Usain Bolt’”?

Well, sort of: part of Mr. Bolt indeed appeared in ’02, as the accompanying cover shows. That’s him on the right, anchoring the Jamaican 4×1. The news coverage of the World Juniors mentioned his name for what we believe was the first time in our pages, with a single sentence: “Jamaica’s only men’s gold came from Usain Bolt (20.61), still just 15.”

Will Coronavirus Compromise The Olympics?

With coronavirus the top story on the world news feed right now—and Japan being one of the hardest-hit countries—many are concerned about the fate of the Olympic Games, due to open in Tokyo in less than 5 months. IOC member Dick Pound said in late February that at this point, the show must go on: “Our plan is that unless the elephant in the room becomes ginormous, we’re going to open the Games on July 24,” he said. “That’s where were headed at the moment, and unless we are diverted from that by public authorities and health authorities, we’ll go ahead.”

If a cancelation or postponement did have to happen, that decision would need to be made in the next three months, he added. Theoretically, the Games could be postponed an entire year, he said, but it would be much more difficult to hold them later in 2020, because of clashes with other major sports schedules. Japanese officials reacted by saying that any talk of postponement or cancelation is pure speculation. They noted that the 3-month window Pound referred to “is not necessarily the IOC’s collective view.”

Diack The Younger Too Rich To Bribe?

In what perhaps is a World Record for an innovative legal defense—at least in the track world—Papa Massata Diack, the son of former IAAF head Lamine Diack, told a judge in Senegal that the bribery charges against him cannot possibly be true, since he was already making so much money.

“In all the years I worked with the IAAF and Dentsu-AMS, I earned around $10 million from sponsoring contracts and TV rights,” testified Papa Massata . “So I had no need to ask athletes to pay money for doping cases.” Senegalese officials have refused to let the younger Diack be extradited to stand trial with his father. They took the testimony in November and forwarded it to Paris along with documents related to the case. It arrived too late for the trial to go on as scheduled, so it has been postponed to June.

Last month in this space we noted that IOC head Thomas Bach had warned athletes against using the Olympics as a forum for political or cultural protests, saying the Games “are not, and must never be, a platform to advance political or any other potentially divisive ends.” There was, of course, some pushback, but the IOC’s Dick Pound has objected to charges that the organization is using Rule 50 to stifle athletes’ freedom of speech.

Pound told a Canadian newspaper, “There is a perfectly simple explanation for such a rule, but in some quarters it has been harshly criticized as an unjustifiable incursion into the rights of free speech enjoyed by Olympic athletes. First, this is not a new rule and, second, it is one wholly consistent with the underlying context of the Olympic Games, during which politics, religion, race and sexual orientation are set aside.”

Noting that every athlete has the right to political opinion, Pound added, “The IOC fully agrees with that principle, and has made it absolutely clear that athletes remain free to express their opinions in press conferences, in media interviews and on social media.”

Nike says that under the new WA rules (Last Lap, January), its Alphafly Next% shoe—the one that Eliud Kipchoge wore in his sub-2:00 marathon trial—is legal, having an insole that measures at 39.5mm, just under the limit of 40. It also contains only one carbon fiber plate, not the rumored three. The Alphafly Next% is now available to the public on a limited basis, getting into the required 3-month window for use in the Olympics.

New Nike CEO John Donahoe says the shoes do not offer a mechanical advantage: “It’s simply using the same materials that go into a shoe and putting them together in an innovative way that allows the athlete to do their very best in a safe way.”

A WA spokesperson said that the ruling body’s research is ongoing: “We are now conducting detailed scientific research that will be finished this year on all the new shoes on the market to determine the extent to which they can improve performance. If in the process of that research we found that a certain shoe gave too much energy return compared to others on the market, say, we would look at our regulations again.”

No Olympic 50K Walk For Women

A last-ditch effort to get the women’s 50K walk on the Tokyo menu was shot down by CAS in early February, saying it had no jurisdiction to hear the appeal. Eight walkers, including ’17 world champion Inês Henriques, brought the case to the court. WA had previously requested that the IOC include the event to no effect.

Paul DeMeester, the U.S. lawyer behind the appeal, maintained that the lack of the event is a violation of the Olympic Charter’s position on gender equality. The 50K walk is the only men’s Olympic track & field event with no women’s equivalent.

Seyni Affected By DSD Rule Too

Caster Semenya dominated the headlines last year when the new WA (then IAAF) DSD standards came into play, but she wasn’t the only casualty. Niger’s Aminatou Seyni, despite being the No. 3 performer on the world 400 list with her 49.19, had to run the Doha 200 instead, with WA’s testosterone rule keeping her out of her chosen event. Like Semenya, Seyni refuses to take medication to lower her testosterone to levels that WA requires. She is appealing the decision CAS made last year in upholding the rule.

“I feel a little bit sad because if I ran the 400m I could have won a medal,” she says, “but for the 200 there are a lot of athletes that are better developed.” For now, she says she is aiming at the Tokyo 200, and perhaps the 100 also. The WA rule currently bans hyperandrogenous females only from distances between 400m and a mile.

Kenya Has Many Fashion Critics

Not everyone is happy with Nike’s new design for the Kenyan Olympic uniform. Despite the defense of the garb by marathon legend Eliud Kipchoge, the uniforms and their beehive design created a stir on Kenyan social media platforms. Wrote one critic, “The other kit does not need to be changed—it is a well-known global trademark and brand that sends fear to rivals.” Another likened the honeycomb pattern as “inspired by bees.” An online petition has been launched to have Nike change the collection for the Olympics. “We cannot have them dressed in the ugly garb that Nike designs every year from the off cuts collected in the bins after they’ve designed other’s sportswear,” reads the posting.

Embattled coach Alberto Salazar earned himself another suspension as the U.S. Center For SafeSport has put him on its temporary ban list. The organization, which polices physical and sexual abuse among other things, would not offer details on the Salazar case. The BBC, meanwhile, has released an interview with former Nike runner Ari Lambie, who says the coach asked her to take a supplement as an experiment to see if it would cause her to fail a drug test. “I don’t know what the substance was,” she said.

Salazar’s bad-news cycle got even worse with more revelations regarding British star Mo Farah and his connection with Salazar. Farah initially denied he was receiving L-carnitine injections in ’14, then changed his story when evidence emerged. UK Athletics officials were reportedly involved in the process of procuring the substance in Switzerland with Salazar’s help.

In November the AIU charged 7 officials of the Russian federation with forging documents regarding World Indoor high jump champ Danil Lysenko’s missed tests. The first set of responses the federation gave to the AIU was so unconvincing that the AIU recommended that the federation be entirely expelled from World Athletics. “A total lack of contrition,” is how the AIU described the Russian position. The WA demand for another explanation of the coverup followed, and Russia reportedly complied. Meanwhile, WADA had asked for a public CAS hearing to resolve the Russia controversy, however CAS will keep the hearing off the public stage. It won’t happen before May.

So Who’s In Charge In Russia?

The Russian sports ministry suspended the track federation for a month and the entire executive committee resigned. The Russian Olympic Committee is now directing the activities of the federation. In the quest to find new leadership for the beleaguered group, 51-year-old Yevgeniy Yurchenko arguably drew the short straw and will be the new president. With little sports background, Yurchenko was previously a regional deputy governor as well as an executive for an aircraft company.

Yurchenko, who is said to have the backing of the Kremlin, won the post after all of the other candidates were said to have pulled out. One of them, athlete agent Mikhail Gusev, told RIA Novosti he did not withdraw his candidacy. “I have just learnt what’s happening myself,” he said. “I am planning to find out what has happened.”

High jumper Ilya Ivanyuk, who won the bronze in Doha, said, “I expect that the changes will be for the better and we will be able to return our athletics to the international family. I would like to believe in this.” ◻︎

« FOR THE RECORD — February
STATUS QUO — February »
Get Full Access