IN ONE MASSIVELY INFLUENTIAL ASPECT, this Olympic season will be like no other in the last two decades. Usain Bolt has left the building. The transcendent track star in the sport’s history plans to be in Tokyo but the Games will go off for the first time since Sydney ’00 without the Jamaican giant spiking up.

While Bolt’s Athens ’04 appearance counts mostly as a prologue, he was there, placing 5th (21.05) in a 200 heat just 3 days after his 18th birthday. In Beijing 4 years later he exploded under the sport’s brightest spotlight to 3 golds and 3 World Records. His winning dash marks (9.69 & 19.30) put Michael Johnson’s half-lap Olympic stunner 12 years earlier in the shade. The 100 clocking ripped apart conventional wisdom that a long-levered 6-5 (1.94) tall man unwinding from the blocks would forever be at a disadvantage in the sprint’s early stages.

Bolt was on his way: to 9 Olympic golds (though that first relay medallion was clawed back 9 years later by retroactive drug testing of a teammate’s sample). At the World Championships of ’09 in Berlin, Bolt was even better, 2 golden World Records that stand today, 9.58, 19.19, and a relay gold. Thus began a streak of 11 WC titles. He also ran a few 400s in his career, his PR 45.28 making him the best combo sprinter ever.

The style with which he achieved it all—his “to di world” pose, the exuberant clowning with which he somehow deflated suspicions the stir he was causing might be making him pompous—shot him into world sport’s stratosphere. Cue the Muhammad Ali and Pelé comparisons; they’re valid. Billions of planet earth’s citizens could not quote Bolt’s times to save their lives. But they’ll never forget the thrills he delivered.

The limelight in Tokyo will have an unfamiliar glow without him—even though last fall’s Worlds in Doha, the first with Bolt absent since ’03, showed the sport has a way forward.

Last month’s T&FN, the January edition, looked back on the just concluded 10 years of the Teens. David Rudisha earned our Men’s Athlete Of The Decade honors ahead of Bolt in a split decision. We’ll never forget, though, that there was a Bolt Decade, 2008–17. He owned his “Legend’ 10 years as no other track man ever has in global sport, and took his lumps in his last World Championships gracefully and with good humor. (Continued below)

Usain Bolt is still a busy man, still a behemoth on the marketing stage in an Olympic year. He has tapped Christian Coleman as the century sprinter he expects to succeed him in Tokyo. With partner Kasi Bennett, he is expecting his first child soon. Nonetheless, he spared a few moments to answer our 10 questions. These were his thoughts.

I think it has to be both Olympic seasons—2012 and 2016. Throughout my career the priority was always winning the major Championships. That was always my motivation. I never really chased times on the circuit and all my best races were always at championships. 2012 was good because I was injured going into it and had a race against time to get fit. 2016 was good because it was my third consecutive Olympic Games gold-medal winning streak.

2. Is there any one race you are most proud of? Why?

The race that stands out was the 2002 World Junior Champs 200m final in Kingston. I was only 15, was so nervous that I didn’t want to run and put my spikes on the wrong feet. It was in front of my home crowd in Jamaica. When I came through that and won [after a World Youth Record 20.58 in the heats] I said to myself that I should never worry about a race again. (Continued below) 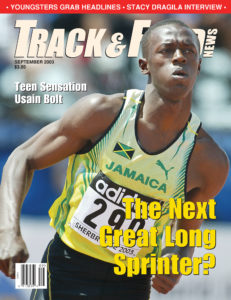 Bolt Sparked The Sport Even As A Youth

A day after anxiously tying his spikes on the wrong feet at first and winning the ’02 World Junior 200 title, Bolt thrilled the home crowd in Kingston contributing to silver medal 4×1 and 4×4 relay runs. A year later, he captured the World Youth 200 crown (Sherbrooke, Canada) and a week after that tore to a 20.13 World Youth (U18) Record.

“I’ve never seen anybody better at that age,” observed T&FN High School Girls Editor Mike Kennedy, who was on hand in both Kingston and Sherbrooke. Bolt had grown 2 inches inches in the year between the two championships, yet elite U.S. sprint coach Lance Brauman, then an Arkansas assistant, told T&FN, “He’s very powerful on the ground for a guy that size. Usually you see that kind of power in a guy that’s 5-10 to 6 feet [1.78–1.83m]. But he gets his knees up well. He handles himself extremely well: good foot placement. He does a lot of things right that are hard to coach.”

After the Athens Olympics, Bolt teamed up with coach Glen Mills, his mentor for the ensuing 13 seasons. When Mills suggested his brilliant protégé might broaden focus from Bolt’s beloved 200 to include the 400, Bolt negotiated a reprieve under which he’d try racing the 100 first in 2007.

3. What are the main factors that prevented you from running faster after 2009? Any career decisions on which you’d take a different path with hindsight?

It was always injuries. I can’t remember a season after 2009 where I had uninterrupted training. As there were no major global championships in 2010 and 2014, I tried to use those years as down years to save my energy. 2012 was probably the year I was in best shape post-2009. I ran 9.63 and 19.32 at the Olympics in London. I think I could have broken the 100m World Record there but I started reaching for the line too early.

4. Did you have fun all the time keeping your pursuit of “legend” status alive for all those seasons, particularly through 3 Olympics, or did you feel slowly but increasingly pressured, bored or tired of the grind as time went by?

My aim throughout my career was to be a legend and win as many titles as I could. When I won in Beijing I wanted to repeat. When I won in London I wanted to do it for a third time in Rio. That was what motivated me. For sure I lost motivation to train towards the end of my career. If you have seen the movie I AM BOLT you would see the challenges in 2016.

5. You made it clear after London 2017 you were ready to hang up the spikes. Are there any moments where you feel even for a second you wish you were still competing? What moments?

I don’t have any regrets about retiring after 2017. I definitely miss the buzz of the stadium and standing on the start line in a big final but I don’t miss the training at all. Tokyo 2020 will be my first time to attend a major T&F event since I retired. It will be a different experience.

6. You tried to play [soccer] football in 2018, and per reports an impasse in salary negotiations brought that to an end. Were salary not an issue, what level of football do you feel you realistically could have reached?

I really enjoy playing football and it was a new challenge for me after I retired from T&F. I only really wanted to do it if I could play at a high level. The coaches told me that I was improving quickly but just needed time on the ball and experience in matches to get better. Unfortunately, it didn’t work out but it was fun while it lasted.

7. As recently as last fall there have been reports you might consider an offer from the NFL. Might your talents be a better fit with American football than soccer football? Speed at a premium, more recovery time throughout the game, etc.

A lot of people say that, but I never really had the desire to try out for the NFL. I don’t like getting hit.

8. Fitness fades without training. What kind of training, if any, do you do now? Could anything motivate you to work that hard again at your age?

I didn’t do much training at all in 2019 but so far this year I have been getting back into it. I do circuit classes with my friends and some bike sessions at home. I hope to do some track sessions with coach Mills later in the spring just to get back in shape. Someone asked me to run a marathon but that is not for me.

9. If you had to guess, how long will it be before the world sees another sprinter revolutionize the 100 and 200 in similar fashion to what you did? 50 years? 100 years? Never again?

It is hard to say. I don’t see anyone at the moment who can ”revolutionize” the sport but you never know who will come along in the future.

10. Final question. Any thoughts on the “super shoe” controversy? If shoes can improve marathon performance by 4%, who is to say the same can’t be done with sprint spikes. That would put Christian Coleman at 9.32 in the 100 and Noah Lyles at 18.87 in the 200. How would you feel about technology disrupting the events so massively?