Taliyah Brooks struggled to a 7th in the USATF heptathlon. Turns out she had been dealing with a right foot injury and doing some of her workouts in a pool.

USC sprinter Davonte Burnett hurt his left hamstring in the final strides of the Pac-12 century and will miss the rest of the season.

With no racing on his card so far this year, Matthew Centrowitz withdrew from the Pre Classic with a reported knee injury.

At age 36, distance runner Garrett Heath says he has left the track behind and will now focus on trail racing.

Annie Kunz missed the USATF multis because of a 50% tear in a plantar fascia.

Arizona State hurdler Jamar Marshall sustained a concussion after falling over a hurdle at Mt. SAC, but was able to bounce back for the Pac-12 win. “Hurdles is like my wife,” he said. “Forget the life, hurdles is like my wife. We go through our ups and downs. We got in an argument at Mt. SAC, so she kicked me out the crib and now I’m back in there and we on good terms, so you know I love the hurdles.”

Katie Nageotte explained that she had to postpone her outdoor opener because of another bout with COVID. She reported moderate symptoms.

Yared Nuguse strained a hamstring in training and was only entered in the 5000 at the ACC. That meant no qualifier to get into the 1500 at the NCAA, since The Track Meet, where he ran his seasonal best of 3:39.29, did not offer enough events to count for NCAA Regional qualifying.

One of the nation’s top prep distance runners, Gavin Sherry of Connecticut’s Conard High, lost his outdoor season to a stress reaction in his leg.

When Florida’s Grace Stark fell in the SEC 100H finals, she did some serious damage, namely, a tibial plateau fracture in her left leg. “I did not expect that that would be my last race of the season,” she says. Surgery followed within a few weeks. “I look forward to this next season, the best is yet to come.”

Arizona State’s Turner Washington struggled at the Pac-12 after hurting his right patellar tendon earlier in the week when he slipped in a wet shot circle and fell. Confirming nothing was torn, Washington said, “It happens. It was a problem. I couldn’t really do anything that I wanted and I didn’t have any timing, but it happens, people get hurt.”

The top frosh 800 runner in the NCAA at 1:46.09, Texas A&M’s Sam Whitmarsh had to cancel the remainder of his season after the SEC. “Sadly, I will be cutting my season short due to the resurfacing of a heart condition that had been previously dealt with in January,” he said. “Just rolling with the punches and trusting in God’s plan for me, can’t wait to see y’all back on the track soon!”

High jumper Anna Chicherova will be missing the biggest meet that Russians are allowed to go to this year, the Russian Championships, because of an Achilles injury.

Sifan Hassan declined to race at Hengelo in June. According to a meet official, “Sifan has had a difficult period after the Games, both physically and mentally, and is therefore not quite ready for the FBK Games.”

Zuzana Hejnová has retired at age 35. The 2-time world champion in the 400H was planning to retire after the European Championships this summer, but instead has announced that she is pregnant. “I have had a great career and from the bottom of my heart, I thank everyone who supported me,” she said. “Now I’m looking forward to a new role.”

Olympic 100 champ Lamont Marcell Jacobs pulled out of Pre with what he said was a disorder of his gluteal muscles, specifically a first-degree distraction-elongation. Previously, Jacobs had missed the Keino Classic with an intestinal bug that was so severe that he was hospitalized and lost significant weight.

Kamalpreet Kaur, who placed 6th in the Olympic women’s discus for India, has been provisionally suspended after a test showed presence of stanozolol.

Canadian steepler Genevieve Lalonde has opted to take a break from competitive running this year, while continuing to train for the ’24 Olympics. “I still have the flame burning for Paris,” she says, “but it felt heavy on my shoulders to think about all the things I had to do to get to the World Championships in a few months.”

Marcin Lewandowski, the World 800 bronze medalist in ’19, has retired at age 34, saying that he has been unable to train effectively since his daughter was injured in an accident. “Was it a difficult decision? I didn’t even think for a second because family is the priority.”

Namibia’s Beatrice Masilingi withdrew from the Kip Keino Classic with a torn hamstring.

Estonian decathlete Karel Tilga withdrew from Götzis after sustaining nerve damage in his right leg while at a training camp in Italy.

Elaine Thompson-Herah missed the Birmingham DL because of a rotated shoulder injury. However, she raced the same weekend in Jamaica, explaining, “I am not 100%, I must say, but I think it was the best decision for me not to go to Birmingham and just to test here to see how I can move on from that.”

Mexico’s Carlos Villareal, the ’19 Pan -Am 1500 champion, has retired at 25 because of a chronic foot injury.

Swiss distance star Julien Wanders will miss the track season with a stress fracture in his sacrum.

World Junior hurdle champ Sasha Zhoya pulled out of the final at Grosseto after a calf cramp. His coach says it’s not serious. 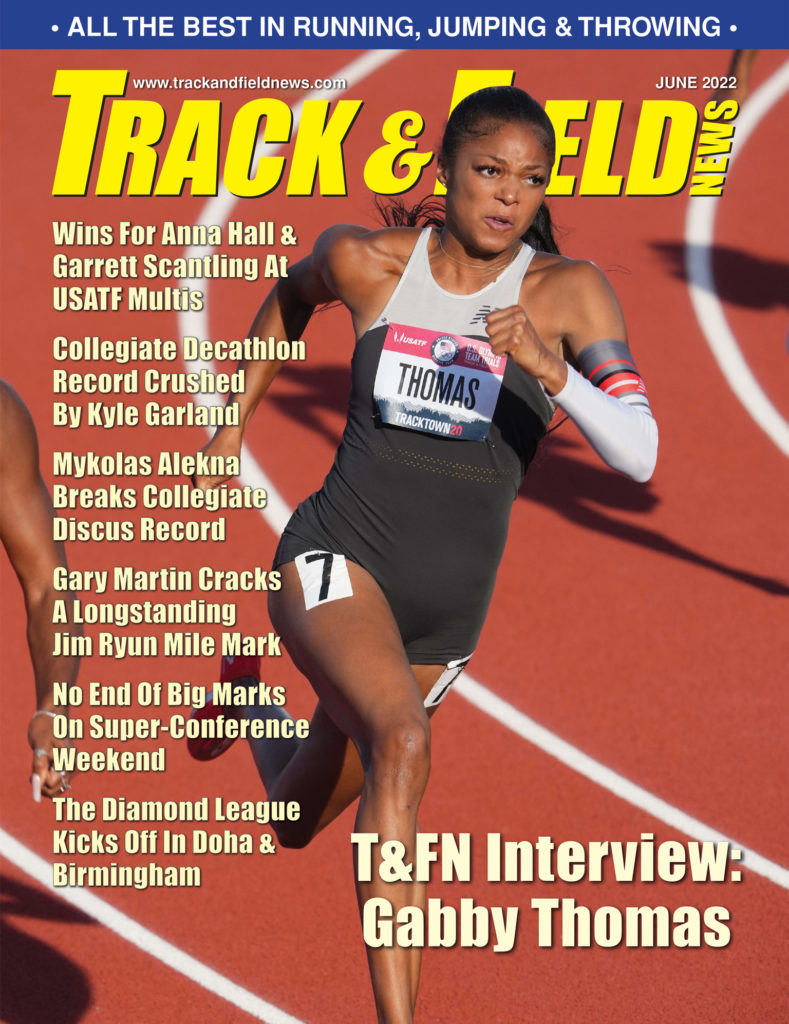