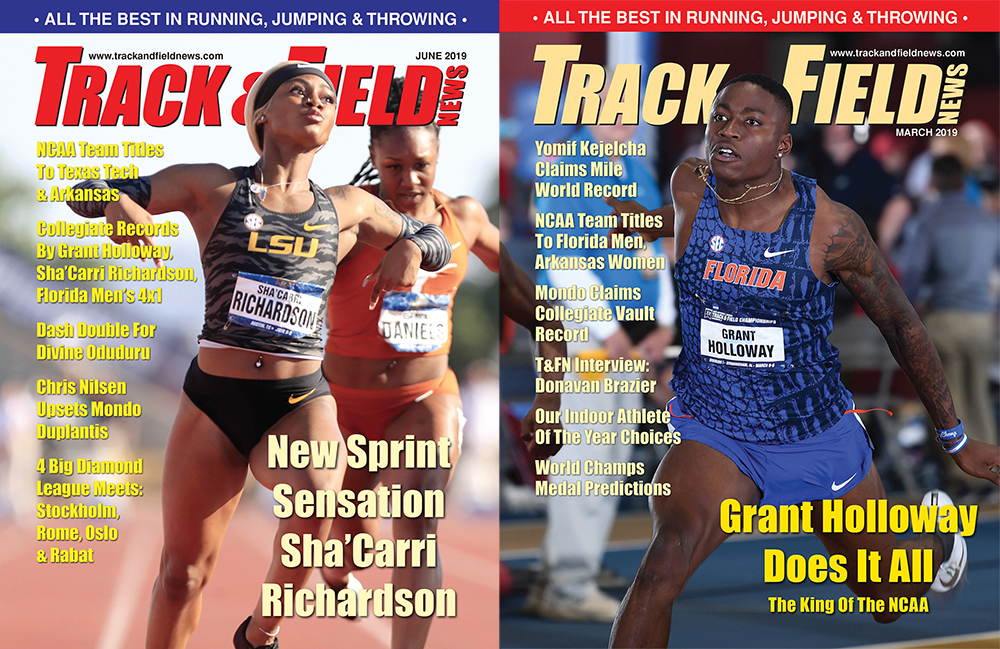 THE CRACKING OF ANCIENT Collegiate Records proved to be the key to this year’s choices as Collegiate Outdoor Athletes Of The Year. Grant Holloway of Florida and Sha’Carri Richardson of LSU did the honors. Holloway’s 12.98 in the 110H finally took down Renaldo Nehemiah’s legendary 13.00 from ’79, while Richardson’s 10.75 century erased both Dawn Sowell’s 10.78(A) from ’89. It took more than just that one performance for them to come out on top, however.

Holloway buttressed his case for the top spot by also producing the Nos. =5, 7, 8 & 10 performances on the all-time collegiate list. And while our protocol doesn’t give any credit for running on high-performing relay teams—these are individual honors, after all—the Gator junior did get some credit for the value of the fastest 4×4 leg in Austin, his 43.74. Holloway narrowly edged Texas Tech junior, Divine Oduduru, the winner of a 100/200 double at Nationals, who moved to No. 2 on the all-time collegiate list in each dash. Oduduru was also undefeated all season, whereas Holloway did lose once, but that to Daniel Roberts, who also tied the old CR. Honorable mention status also to vaulter Chris Nilsen (South Dakota) and HJ/LJ doubler JuVaughn Richardson (LSU).

As for Richardson, she was undefeated in the 100 by collegians and lost only the NCAA final in the 200, moving to No. 5 collegian ever in that event. Honorable mention to Janeek Brown, whose 12.40 hurdle win missed the CR by just 0.01. The Arkansas soph then came back to take 4th in the 200.

The all-time winners, since we began this award in ’95 (women are listed with the last name they were using at the time):

Divine Oduduru Woke Up On The Right Side Of The Bed

Grant Holloway Has His Day Of Days

Sinclaire Johnson ’19 An Upgrade Over The ’18 Model