WHY HAS MOVING-LIGHT TECHNOLOGY had such a revolutionary impact? Doesn’t the runner still have to do the fundamental physical job of running the distance at record speed? Of course, but running records has never been just about the physical capabilities; it has always been a test of several other skills.

The crucial ones, if you want to succeed in setting new World Records:

¶ Daring to venture into the unknown.

¶ Having the ability to monitor your own pace at every stage of the race and act accordingly. “Am I running fast enough at this stage to get the record but still not so fast that I risk ending up unable to maintain the necessary pace for the whole distance?”

But haven’t runners always had the advantage of live feedback on their progress, previously in the form of lap times called out to them?

Of course they could hear from trackside the calls for speeding up or slowing down. But then they still needed to process that information, to exactly determine the amount of acceleration/deceleration needed—and not least to successfully execute those pace changes!

The Part I examples of the previous recordsetters clearly showed how tough that really is to achieve on the run, especially while you are moving at a pace bordering the known limits.

The feedback they now receive from the moving lights is something fundamentally different.

¶ It is continuously “online,” not something happening with intervals of about a minute.

¶ It is visual and analog, not audial and digital.

¶ It also—without the runner even having to ask—automatically provides the answer to the question about the exact desired pace that ought to be followed.

The advantage of the moving lights therefore heavily influenced the scenario of the race in two fundamental ways:

¶ The pacemakers. They don’t need to have the skill to by themselves find and keep the desired running speed. Instead they are steered right from the gun into the requested pace by a programmed device.

We all know from experience that something called ”perfect pacemaking” is an illusion. More often than not it ends up the other way around, i.e. the pace becomes either too fast, too slow or too erratic. Humans are human.

¶ The recordhunter. When the pacemakers have stepped off the track the runner is still not left alone during the second half with his thoughts and the increasing pain. Instead he continues to be guided by a device that he in advance knows will guarantee success (i.e., the desired record time).

Thus he won’t have to worry about if he is doing enough. So no on-the-run analysis or decision making is necessary, rather the mind can focus completely on the task of keeping up with the lights.

The extraordinary level of assistance the moving lights can provide is even stronger highlighted by the WR 5000 of 14:06.65 set by Letesenbet Gidey the same night in Valencia as Joshua Cheptegei’s 10,000. Here is the table comparing Gidey’s 200 splits with those of the previous WR, Tirunesh Dibaba’s 14:11.15 in Oslo ’08.

The differential column tells a true roller-coaster story. Dibaba was ahead by up to 3.5 seconds during the first two kilometers before the tide turned in the third where she rapidly fell far behind. The Gidey advantage continued to grow to almost 10 seconds in the fourth kilo before Dibaba hit a new gear and with a sub-2:10 last 800 ended up just 4.5 seconds behind.

The lap-time graph for this race is even more revealing as to the advantage the moving lights provided to the recordhunter: 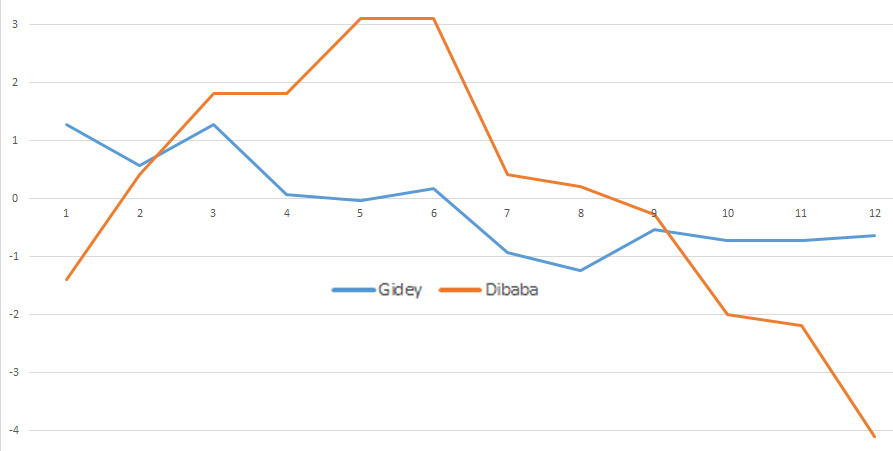 But the graph also in another way significantly differs from that of the 10,000. While Cheptegei as shown kept the same metronomic pace all through his race Gidey gradually sped up. She actually started out at a pace that was clearly slower than the average needed to break the record. How come?

The answer is that—despite being a kind of pace never before seen in a major record attempt—it was the pace the moving lights were set at according to the wishes made in advance by Gidey! And it was no secret:

This is smoking-gun evidence proving how the moving lights system was used to directly guide the pacemakers as well as Gidey herself and thereby provided a significant and crucial assistance never before available.

Because rather than—as said in the rules—“…indicating progressive times during a race, including of a relevant record”—the system showed the times the recordhunter personally had asked for.

That could be seen as counterproductive if the main purpose really had been to enhance the experience for the spectators/viewers. Because that would have been best achieved if the lights had indeed—as the rule implies—moved at the (average) speed of the existing record.

That would have provided some extra excitement as the spectators/viewers—rather than seeing the athletes just following the lights from start to finish—would have experienced a ”record hunt.” Especially so under the provision that Gidey—despite the lack of personalized light assistance—had dared (and managed) to follow the unorthodox pacing plan.

Because then she would have fallen clearly behind in the early stages losing ground on the first laps, being some 2.5 seconds behind halfway, then beginning to reduce the gap but still not catching up with the theoretical even-paced record until after 8½ laps. After that she would have gradually built the 4.5-second cushion she had on the record at the finish.

This example also illustrates that there is no simple answer to the question of what kind of ”enhanced spectator experience and excitement” the moving lights actually can and will contribute.

¶ In Valencia the sole purpose of the races was for one designated athlete in each event to break the WR. Now both succeeded but if not—i.e. if the protagonist had not been able to keep up with the lights—the technology lap after lap would have signaled ”failure” even if the athletic achievement in itself would have been absolutely brilliant.

¶ As a WR is ”the best performance ever” the by far most common outcome of any competition is not breaking the record. If we look at the distance records broken in 2020 they had all stood unchallenged for over a decade. So the extremely exclusive prospect of a successful WR attempt is unlikely to build growing and lasting spectator appeal.

Rather it ought to be the head-to-head competition aspect that we should focus on if we want to promote our sport towards a wider audience. It is the true races that provide excitement because different skills and tactics create different scenarios resulting in different—often surprising—outcomes.

¶ Would this technology contribute to more exciting head-to-head action? Unfortunately not, as what makes racing exciting is that runners frequently take the initiative along the way by varying the pace with the aim of influencing the final outcome to their own advantage. Such action is not compatible with a preprogrammed one-size-fits-all pace.

Such ”interference” would instead probably pacify athletes by discouraging them from the risks/chances connected with taking the initiative along the way. Something similar to what we are used to seeing during the first three kilometers of a typical Diamond League 5000: all the main contenders are content to just follow the pacemakers and no one is even contemplating rocking the boat during those first 7½ laps.

¶ The Valencia women’s 5000 pace was tailor-made for one single athlete. If there had been another athlete of similar ability but a slightly different talent profile (i.e., preferring a faster early pace) that athlete would actually have been put at a disadvantage by the moving lights!

It is a tool of assistance for events that have the character of solo exhibitions rather than competitive races. But is really more exhibition and less racing the way forward if we want to make our sport more attractive?

Of course the odd WR attempt exhibition can add extra spice—it certainly did in a year like 2020 when there were no championships and almost no opportunities for elite head-to-head encounters—but it is hard to see that as a concept to build a long term viable more attractive sport upon.

Runner X wants to attack Cheptegei’s 26:11.00 and therefore asks for the moving lights to be set at a steady pace of 62.74 per lap—just a 10th of a second faster than Cheptegei’s average. Runner X then before the start knows for a fact that if he manages to follow the moving lights from start to finish he is assured to break the record by the small but safe margin of 2.5 seconds.

And if that record attack was successful the next record hunter will of course ask for a 62.64-pace and so on.

Thus no future recordhunter will need to have any race plan other than “Follow the lights!” Also all spectators/viewers will know that the monotonous even-pace-script will be strictly adhered to from the gun and that nothing will happen along the way unless of course the main runner fails to keep up with the lights.

With this electronic pacing the recordhunter won’t need any skilled human pacemakers (so that profession will become redundant)—not even for drafting. Cheptegei demonstrated that in Valencia when he in the first half never stuck to the slipstream position behind the pacemakers.

Instead he most of the time lagged an extra meter or two behind the runner immediately in front of him. Cheptegei’s game plan was to follow the green lights, not to shadow the pacemakers. This was clearly demonstrated by the immediate further widening of the gap back to Cheptegei when the last pacemaker speeded up slightly to move into the blue wave section some meters ahead of the green wave.

So Cheptegei obviously viewed the new electronic device as a more important assistance in his record quest than the traditional human pacemakers.

Switch To Part I 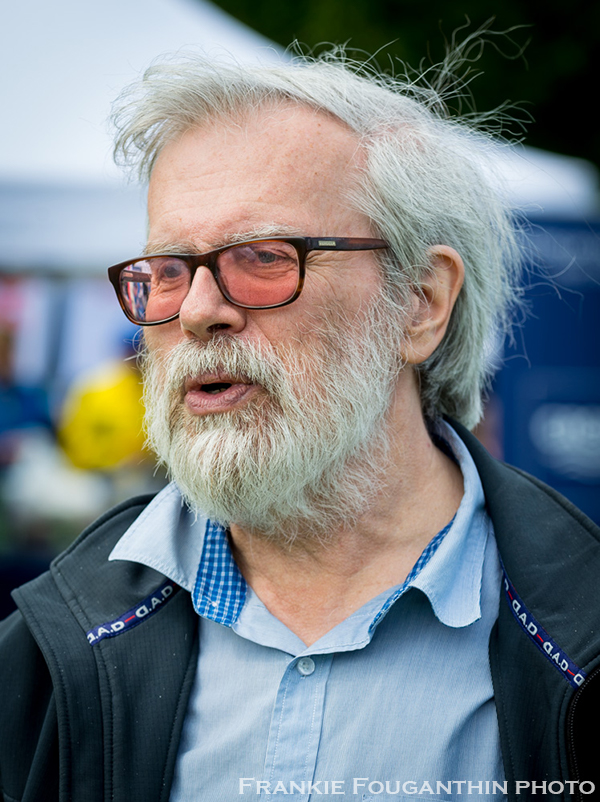 Sweden’s A. Lennart Julin has for many years been noted as one of our sport’s premier number crunchers and insightful analysts of what numbers really mean.