THE WORLD RECORD HOLDER in the 100H is one to count her blessings. Keni Harrison, after four straight No. 1s in the T&FN World Rankings, 2016–19, admits she herself is stunned by it: “It’s just insane to even think that I’m [No.1] because the hurdles, you know, anyone can go out there and take it. I was just blessed that I was able to come with the fourth time to be No. 1.”

Harrison, who has always stayed on the humble side of the street, admits that her thankfulness was forged in a large part by her experiences in ’16. Picked as the favorite for the Olympic Trials after her American Record 12.24 at the Prefontaine Classic, the Kentucky alum had an off day and finished 6th.

“Sometimes we don’t understand when things don’t go the way we want, but you have to keep your faith in that moment,” she says. “I was so angry with myself. ‘God, why me?’—that type of thing. I threw a pity party for a little bit.

“My coach had to tell me, ‘Keni, you need to go and pray and ask God what He wants you to do and what are you going to do from here on out?’” 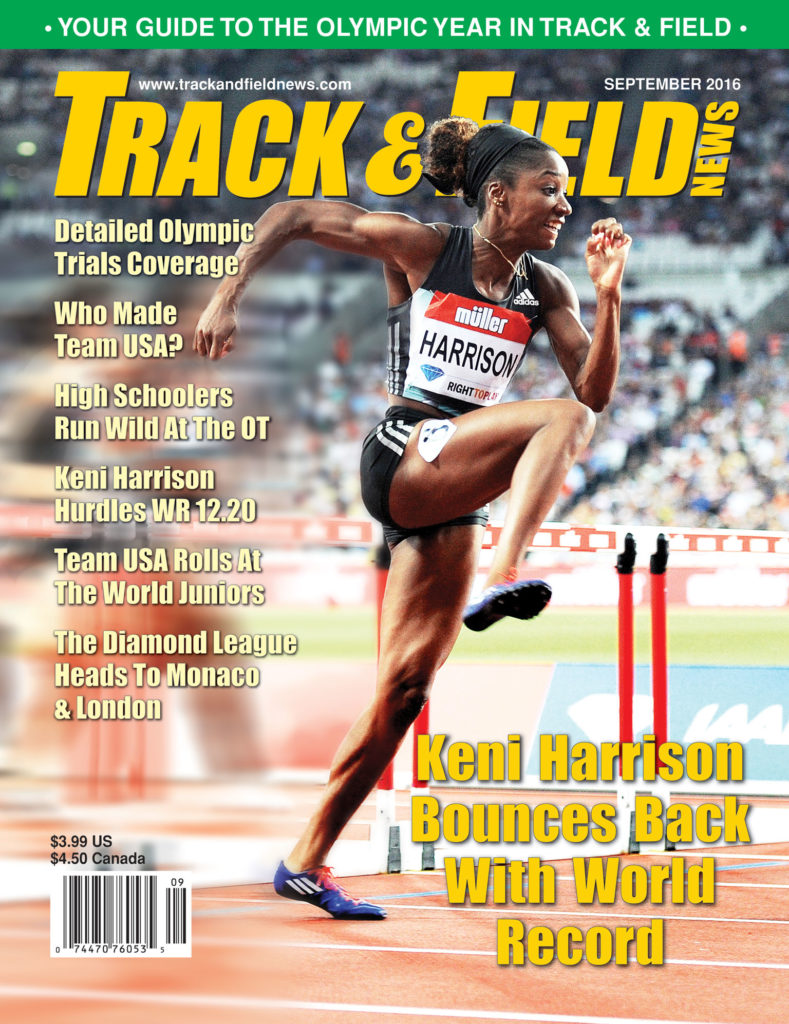 The focus on faith clearly worked out for Harrison. She traveled to Britain for her next meet two weeks later and blistered a World Record 12.20.

“I would definitely say it’s my proudest moment,” she says. “Because I got the World Record, but more so that I got back up. To have a defeat two weeks before [after] only having one goal for that year, which was to make the Olympic team. To not accomplish a goal but then forcing yourself to get back up and get back out there. That did a lot for me personally.”

At the close of that momentous year, she had no Olympic medal, but took consolation in a WR plaque and the first of her No. 1s.

Her next campaign sparkled as well, with a list-leading 12.28 and an undefeated string that lasted until the World Championships, where her 12.74 landed her in 4th. While it was good for another No. 1 ranking, missing the podium burned.

She and coach Edrick Floréal, focused on what they saw as the challenge—bringing Harrison’s everyday game to the big meet.

“I’m a lot more confident. Just talking to my sports psych and working on going out there and running fast all the time.”

It showed in her last full campaign, 2019. Another undefeated streak led to the national title (12.44). In Doha, she finished 2nd to teammate Nia Ali, but she made the podium, finally.

“That was huge for myself and my coach,” she says. “That’s something that I know I had the possibility of doing. It’s just that year I finally was able to put my mental game to the test. I’ve been working hard on controlling my nerves and anxiety and just pressing myself. It was a good year for me.”

She was ready for another go at the Olympics. Indoors in ’20, she led the world with her 7.80 over the 60s. Outdoors Harrison—along with the rest of the world—had to rethink everything when the pandemic struck.

“It was tough,” she admits. “From the beginning, I didn’t want to believe it. Once reality did sink in that this is happening, [I realized] this is bigger than myself. I was going to try to find things to keep me motivated to go to training. Once I found my routine, I think I was able to finally deal with it on better terms.”

Floréal’s pro group, unable to use the facilities at the University of Texas, eventually found a high school track that they used for several months. Since September, they’ve been back at their usual haunts, wearing masks in the weightroom and getting COVID testing every week.

“We’re just trying to play things the way that it is, just doing what we can to stay safe and get our workouts in.”

Obviously, the summer was different than any Harrison had experienced before. “It’s hard going to practice every single day and not knowing where you’re at. When you run in a track meet, you’re able to say, this is where I’m at. But coach Flo found ways for us to stay in shape and be competitive, just competing with my training partners.

“I worked a lot this summer on my sprint mechanics. To be a great hurdler, you’ve gotta have great mechanics. That’s something that in the season it’s really hard to focus on because I’m just running the 100 hurdles.”

She calls it the “positive side of quarantining—I worked on something that I needed to work on.”

The frustrating part was not racing. “Races… you get to see how fast you’re going. You get to see all the hard work you’ve been putting in. So it was tough.”

Rather than head to Europe for the late circuit, Floréal and his athletes decided to stay home, a decision that was based on the calendar lineup for the next 5 years, a stretch that—tentatively at least—features a Worlds or Olympics every summer.

As for her long-term plans, Harrison says, “If my body is still going, I definitely want to keep going. I just want to run until my body can’t run fast anymore. I think I’ll know when that time is, but right now I feel better than I ever have. And everything is really starting to click even more than in 2016, just how I approach things mentally and physically.

“I’m understanding the hurdles better and better. I’m only getting wiser in the event, if that makes sense. Every year I just become better.”