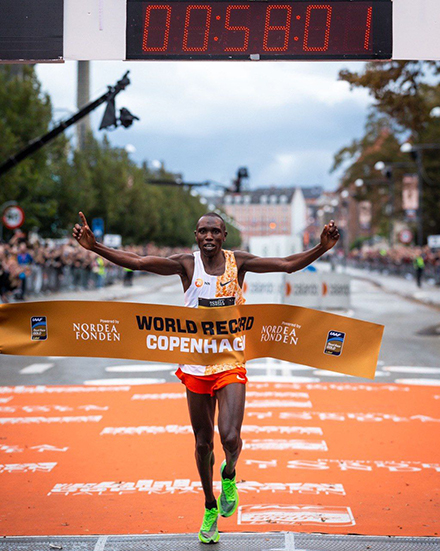 COPENHAGEN, DENMARK, September 15—Under cloudy skies, and despite one intense bout of rainfall, Geoffrey Kamworor smashed the half-marathon World Record with a stunning 58:01 performance that took 17 seconds off the mark set by fellow Kenyan Abraham Kiptum in Valencia last October.

The first 5K passed in 13:53, with the 3-time world half marathon champ tucked into a large lead pack. He moved to the fore then, and led the group through 10K in 27:34, a 13:41 segment. Then next increment came in a jaw-dropping 13:31, leaving behind the other racers and blistering the pace, even as the brief-but-heavy storm hit. His time at 15K—41:05—is the fastest ever recorded in an event that’s no longer on the official WR list. The old best was 41:13 by Leonard Komon in ’10.

SOUTH SHIELDS, England, September 08—As always, the Great North Run proved itself to be a prime source for fast half-marathons. Problem is, the course is downhill (by 30.5m), so no records can be set there. Nonetheless, Brigid Kosgei produced the fastest women’s race ever, a 64:28 that supersedes Joyciline Jepkosgei’s official World Record of 64:51. The 25-year-old Kosgei blistered a 4:46 opening mile and at 10M (49:21) and 20K (61:20) also recorded the fastest times ever. On the men’s side, Mo Farah won for the sixth time, running his fastest ever, 59:07.

Said the winner, whose old PR was a 58:54 dating all the way back to ’13, “It wasn’t my plan to pull away after 10K, but it was the right time to do it. And the wind turned out to be not a problem. It is very emotional for me to set this record. And doing it in Copenhagen, where I won my first world title, adds something to it.”

Kamworor, 26, trains with marathon recordholder Eliud Kipchoge, who said, “I must say that it is a huge congratulation to Kamworor. I am so proud to see him run and set the World Record. It was down to great planning, preparations, teammates, coaching and management. That is the recipe for World Record breaking.”

Ethiopia’s Birhane Dibaba took the women’s race in 65:57, a PR by almost 2 minutes, leaving a trio of Kenyan competitors behind after the 15K. Evaline Chirchir was runner-up in a lifetime best 66:22.

About the author: we’re never quite sure where reclusive Special Projects Editor Roy Conrad will show up next, although he is halfway to retirement at this point.