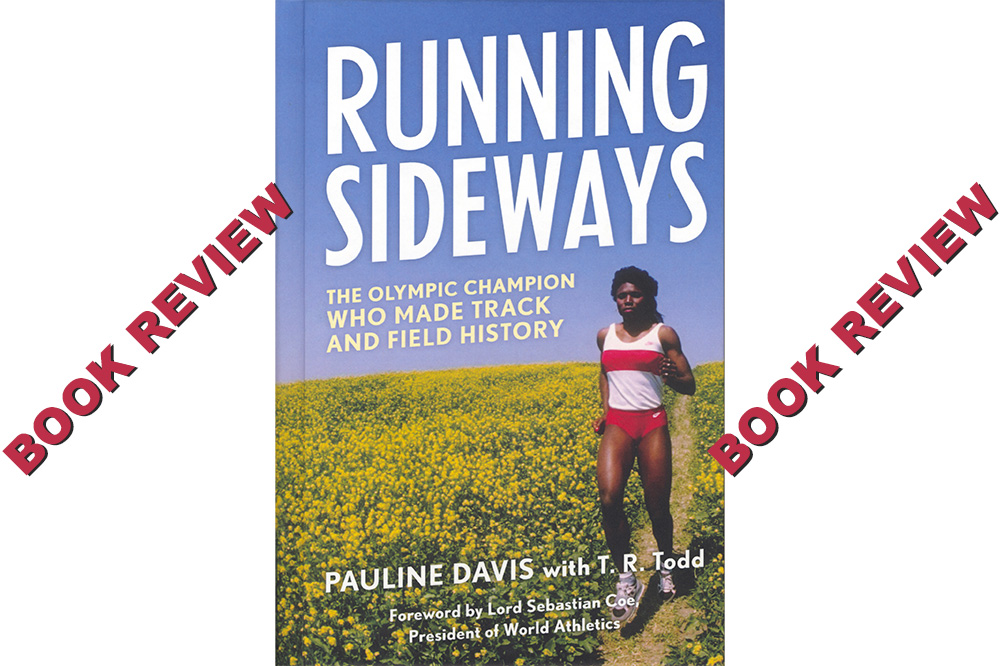 QUESTION: WHO WAS THE FIRST Caribbean woman to win an Olympic gold medal?

True, Jamaican women, like Merlene Ottey and Juliet Cuthbert, had medaled previously, but after Marion Jones’s drug DQ Davis was the first to end up with the top prize. In fact, she pocketed two golds that Olympics, the second as the third runner on the victorious Bahamian 4×1.

When I was asked to review a new book on the life of Pauline Davis, I wasn’t sure what to expect. I knew that she was a top collegiate sprinter at Alabama (’89 winner of the 400), and then went on to win a few medals at the Olympics and Worlds, but not someone in the international superstar pantheon.

Well, Running Sideways: The Olympic Champion Who Made Track and Field History turned out to be one of the most compelling track books I’ve had the pleasure of reading lately.

Davis’s signature track achievements of course came in Australia with those two gold medals. The relay win, in particular, was the culmination of a long career which encompassed five Olympic Games. Because the saga of Jones’s disqualification dragged out over several years, delaying Pauline’s gold medal ceremony almost a decade, the 4×1 victory got the immediate glory, captivating her entire country.

The Bahamas at that point had been an independent nation for only 27 years; its population of 300,000 is 0.1% of that of the USA. Pauline and her relay mates became instant national heroines.

The book’s title comes from her original running “style,” which she explains as, “I sprinted sideways, with my hands held up around my chin, swaying side to side, my body crooked to the side, as if I was carrying buckets of water.”

Neville Wisdom was the first coach to try to make her form more fluid. Wayne Williams at Alabama was another. Don Quarrie and Manley Waller coached her after that, and then it was Loren Seagrave who prepared her for the ’00 Games.

There were many tears on the way to those Olympic laurels. Some tears of joy, yes, but many heartbreaks and serious setbacks for the girl from “the other side of the tracks” in Bain Town, not one of Nassau’s poshest addresses.

A 2-week hospital stay with pneumonia while she was at Alabama set her training back for months.

And there were two horrendous episodes at European airports: at Charles de Gaulle she was suspected of being a terrorist; her bag was destroyed and she was detained and roughed up by police.

In Rome, she slept on a bench waiting for a delayed flight and woke to the barrel of a gun. Police tossed her in the slammer and accused her of being a prostitute.

And then there were the snubs and sabotage of her own federation, the worst being pulled off at the 400m final start line at the ’89 Central American & Caribbean Championships by Bahamian officials. She had left the cramped athlete’s village to get a decent night’s sleep in a hotel before the final — and that was against the rules. Incredibly, team officials threatened her with a lifetime suspension for this offense.

Davis was no shrinking violet. She spoke her mind and that got her into trouble with her federation and some jealous competitors. She did have important people in her corner though — in particular two of the Bahamas’ prime ministers: Sir Lynden Pindling and Hubert Ingraham, both of whom were instrumental in providing support and making the federation see reason.

Like any good story, this one has a happy ending. Davis suffered two devastating miscarriages after retirement, but she was elected to the IAAF Council in ’97, the first woman of color on that body, and she became a strong ally of Seb Coe in his efforts to return the organization to respectability after the Diack fiasco. In ’19 she was made a Lifetime Honorary Member of the Council, only the second woman to receive that honor.

Running Sideways is available for $34.00 from the publisher (www.rowman.com) or from amazon.com.