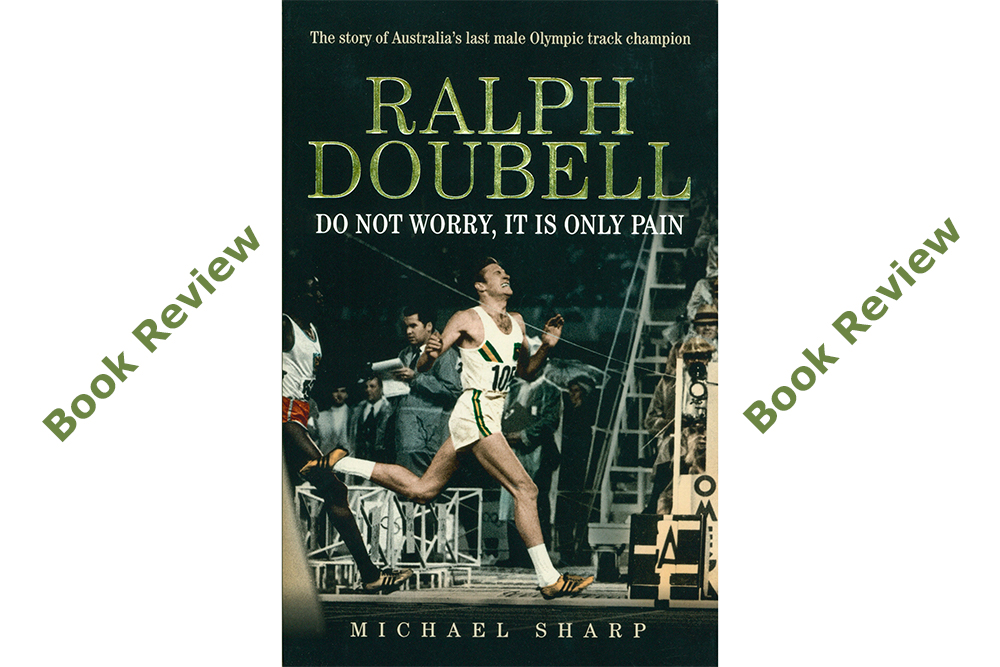 The 50th anniversary of the ’68 Olympics in Mexico City has been a springboard for a number of books focusing on the stars of that Games, like Dick Fosbury and Wyomia Tyus. Here’s another one—a biography of the 800 champion from Australia, Ralph Doubell.

Doubell, coached by the legendary Franz Stampfl (one-time mentor to Bannister, Chataway, Brasher, among others), had had some impressive campaigns, most notably the ’68 U.S. indoor season. Still, T&FN’s international panel of experts was not convinced and only Bert Nelson had Doubell for a medal (bronze). The predictors favored either ’64 Kenyan bronze medalist Wilson Kiprugut or American Wade Bell. Bell (1:45.5) and Kiprugut (1:45.7) had the year’s fastest times, while the Aussie’s best was only 1:47.2.

Stomach illness put paid to Bell’s chances and he did not make it past the first round. The way should have been clear for Kiprugut, but in the final Doubell was able to maintain reasonable contact—the elastic thread—with the frontrunning Kenyan, and with an irresistible accelerating burst sprinted past Kiprugut for the gold. You can see it in the sequence photographs in the book—Kiprugut’s stride is lengthening as he tried to hold on, and Doubell in classic middle distance sprinting form. Doubell’s time tied Peter Snell’s World Record of 1:44.3.

When informed by third-placer Tom Farrell that he’d equaled the WR, Doubell said “Well, that’s nice.” He had won his semifinal (over Kiprugut) in an Australian Record 1:45.7, a big PR, and then lowered his PR nearly another second and a half in the final. But the time was not that important to Ralph; it was the winning that counted. His systematic training with Stampfl enabled him to run as fast as was necessary to win the gold, even though it was territory where almost no one had gone before. Doubell gives full credit to his years with the Austrian coach.

Actually, I’d forgotten this, but I did the T&FN Olympic issue writeup for the event at Mexico and came to no conclusion about altitude help or hindrance for the 800 meters. The common wisdom then was that events of duration of two minutes or less would not be affected negatively by altitude. Thin-air sprints were certainly aided, but Farrell and Doubell speculated they might have run even faster at sea level. Now, 50 years on, T&FN considers it a wash, and doesn’t attach an (A) to 800 times made at altitude.

This biography of Doubell was written by Australian journalist Michael Sharp. It is comprehensive, almost mind-numbingly so for this American reader. But the important thing: Doubell’s transformation from a very ordinary scholastic runner to world-class middle distance runner under the tutelage of Stampfl is well documented. How Stampfl got to Australia in the first place is a story in itself. And the stars certainly aligned to produce an Olympic champion.

Doubell had some reasonably good seasons after ’68, but his hopes to defend his title in Munich were ruined by injury, and he then made the decision to get serious about his business career, getting an MBA at Harvard. He spent his working life working for large corporate entities like Citibank and Goldman Sachs in New York, Chicago, London, Sydney and Melbourne. But he also was the chairman of two tech startups and returned somewhat to the public eye in Australia as chairman of Athletics NSW (New South Wales), 1995–04. He was also a founding director of Stadium 2000, as Sydney prepared for the 2000 Olympics.

All in all, a good read, though I found some sections a bit tedious, like the recounting of Australian success and failure at each Olympics and what’s wrong with contemporary Australian male runners. You don’t hear names like Merv Lincoln and John Landy and Raelene Boyle and Betty Cuthbert much these days, especially in the USA—a reminder that Australia was once a major force in our sport, and we miss you.

RALPH DOUBELL: Do Not Worry, It Is Only Pain, by Michael Sharp. 325pp. Paperbound. Well illustrated. Available from Stoke Hill Press. www.stokehillpress.com.