WHAT A YEAR 2018 turned out to be. Conventional wisdom had it positioned as one of those off-years with no Olympics or World Championships to brighten our lives—at least that’s what glass-half-full types think—but as is always the case, the athletes came through big-time anyway. Kipchoge, Semenya, Mayer, Duplantis—the list of high-end performers was boundless. They made it easy for us to produce my favorite issue of every year, the Annual Edition, what with all its Rankings and lists. And this is probably my favorite of all the 50 (yes, 50!) Annuals of which I’ve played a part.

It shouldn’t take much time for veteran subscribers to notice the marked upgrade in the World Rankings in this, our first Annual of the digital age. In years past we laid out the complete season for the No. 1s in each event, with most of the others in the Top 10 having their seasons pared down in order for us to be able to squeeze an event onto a single print page. But as a wise trackwriter once said, “Electrons are free,” and that means there’s no more squeezing required: not only have we laid out for you the complete season for each member of the top 10, we’ve also added 2 more columns to the mix. In the recent past, the Rankings have given you just the mark/place/meet. Now you also get the date of the meet and—and this is a big one—a column detailing all those who beat the athlete in the meet in question. That should go a long way towards making our Ranking decisions easier to figure out. And as another adjunct to the whole increase-your-pleasure dynamic, each event has a link to yearly Top 50 lists instead of Top 40.

And best of all, you’re going to get the whole shebang—for the first time ever—before the end-of-year holidays. Such is the wonder of digital publishing. Push a button and it’s done. No waiting at a printing plant, no disappearance down the rabbit hole that is the postal system. Direct from us to you at the speed of light.

Unlike running, however, we realize that speed isn’t everything in the entertainment biz. There’s something to be said about the look and feel of an ink & paper product. That’s why while we’re completely committed by the realities of the modern marketplace to making a go of the digital enterprise, we’ve also been trying to bring some satisfaction to those faithful readers who simply can’t live without some tree product.

Our first stab in that direction was the PDF version, which allows you to print out a “copy” of the online magazine either at home or your local Kinko’s. The early PDFs were, to be honest, a fairly feeble product as we struggled with a formidable transition from decades of ingrained hard-copy methodologies. Ugly huge blocks of white space, bad breaks between articles, ultra-wide columns. As the year went on, we refined the process, so if you got turned off back in April, try ones from later in the year to see how much we improved the product.

We’ve not given up trying to improve your ability to get to a style of T&FN you can live with, so we’re happy to announce that starting with January ’19 we’ll be able to offer you something in the ink & paper realm that’s closer to the old days. Make no mistake: this is not T&FN as you once knew it, but it’ll be pretty darn close. In essence we’ll be taking the PDF version and turning that into a printed version that we can mail to you. There are some cautions: in the printing industry to make it an economic possibility we’re required to produce pages in multiples of 8, meaning that when the PDFs are converted, there will almost surely be some copy that gets eliminated/truncated to make it fit. Or perhaps a photo or two will disappear.

In addition to the multiples-of-8 wrinkle there’s also the matter of our having to produce a product that isn’t so long it decimates an entire Canadian forest. For example, a “replica” print version of this Annual would stretch to some 200pp. That’s just a non-starter, so all that wonderful detail that’s in the Rankings will have to disappear (as it will from the PDF version, but note that if you’re reading the PDF version onscreen, it includes links to the fully detailed Rankings on our website).

Hopefully we’ve now struck upon a mix of options that will please everybody and you’ll hang with us long enough to see many more great years of field & track. We’ve derived great pleasure through the years in serving the world’s hardcore fans and we plan on continuing to do so. 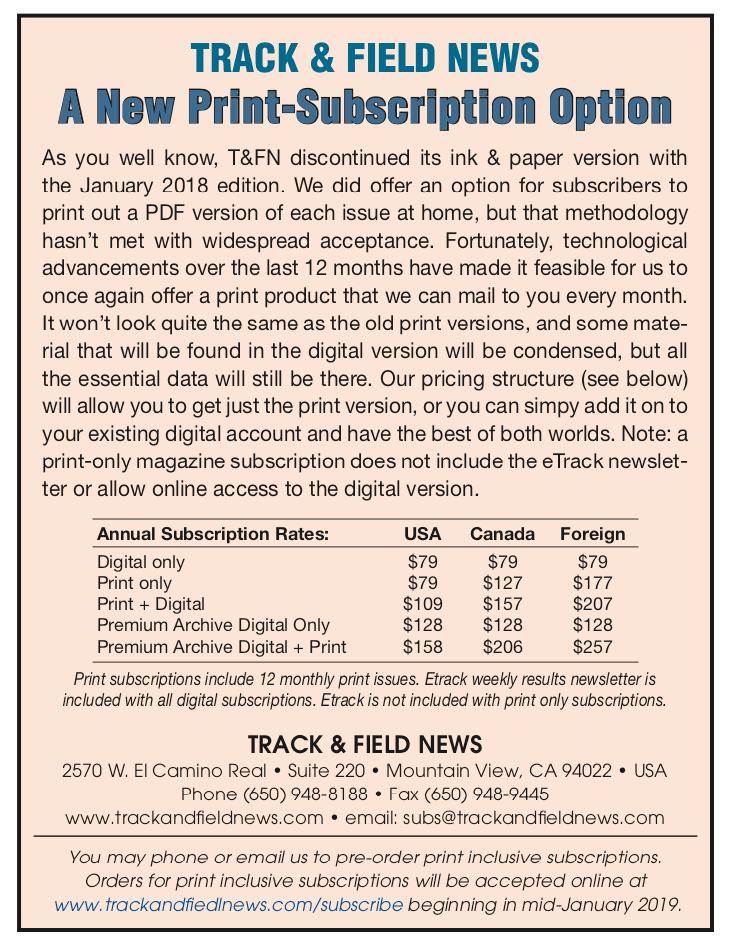