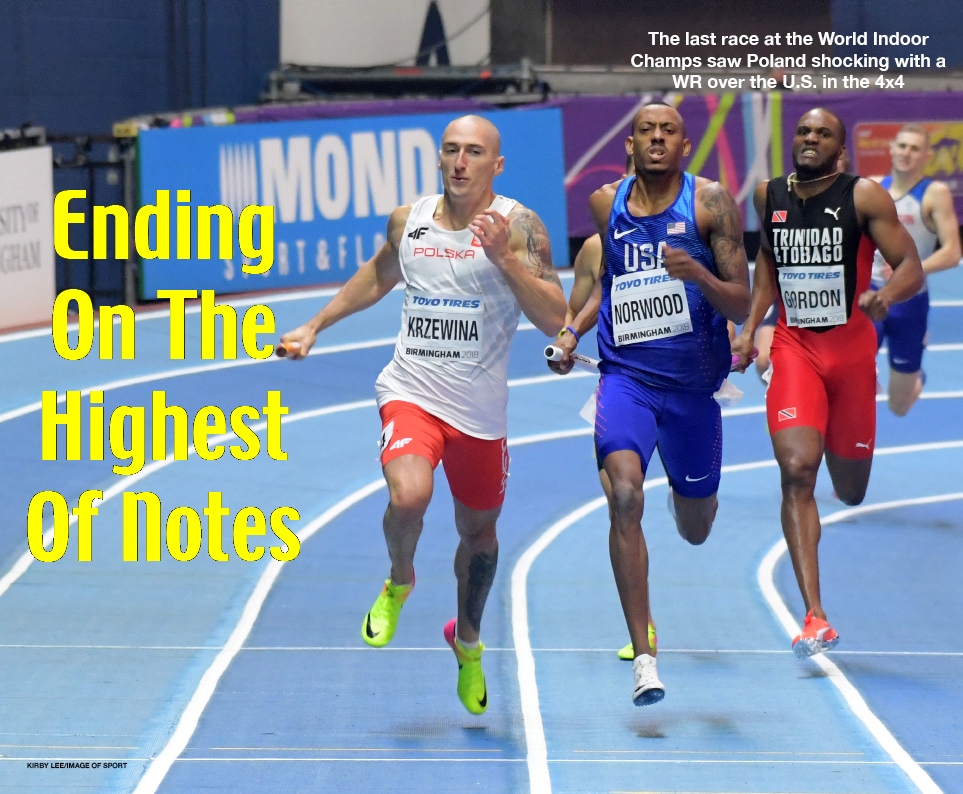 Birmingham, England, March 1–4: IAAF President Sebastian Coe described the host city, staging the World Indoor Championships for the second time after first playing host in ’03, as “Britain’s home of athletics” and there is certainly some truth in that statement. Just like Eugene, the local track fans in Britain’s Second City will come out rain or shine or, in this case, snow and blizzards.

From the day before the meet started, temperatures dipped to below freezing with snow and ice making getting to the venue very difficult, with much of the local public transport coming to a halt for several days, but somehow near-capacity crowds in the 8000-seater Birmingham Arena—which had a $41 million refit in ’14—took their seats for three evening sessions and also Saturday’s morning get-together, which saw finals contested.

The only sparsely attended sitting was the opener on Thursday night, which saw the two high jump finals and women’s 3K take place.

The decibel count was also raised with innovative event presentation by the same team that provided the lights and sound at the ’12 OG and ’17 WC.

The athletes responded. One WR—the 16th in the Arena since it started staging indoor track meets 26 years ago—6 meet records, 13 world leads, 8 continental records, 2 ARs and a whole slew of other national records were set.

However, all eulogies must come to an end and there were things that definitely didn’t go too well. One of the main talking points was the spate of DQs.

No fewer than 22 athletes got tossed, some for false starts, no complaints there, but an extraordinary amount for stepping inside their lane or inside the track.

Opinions differ, some would argue that they were rightly punished according to the rule of the law and have got away with the laws being laxly applied in other meets. Others, including apparently Coe himself, thought the rules were too rigorously applied and many of those DQed got no material advantage.

Events in the men’s 400 did nothing to enhance the image of the meet with all the runners in one heat being DQed—the first time this has happened at a major meet since the 1944 AAU 100 final (see p. 46).

The jury is still very much out on the value of reducing the final stanza in the horizontal jumps and SP to 4. The meet coverage:

Which Event For Holloway?

Rupp Happy With Transition From Track To Road