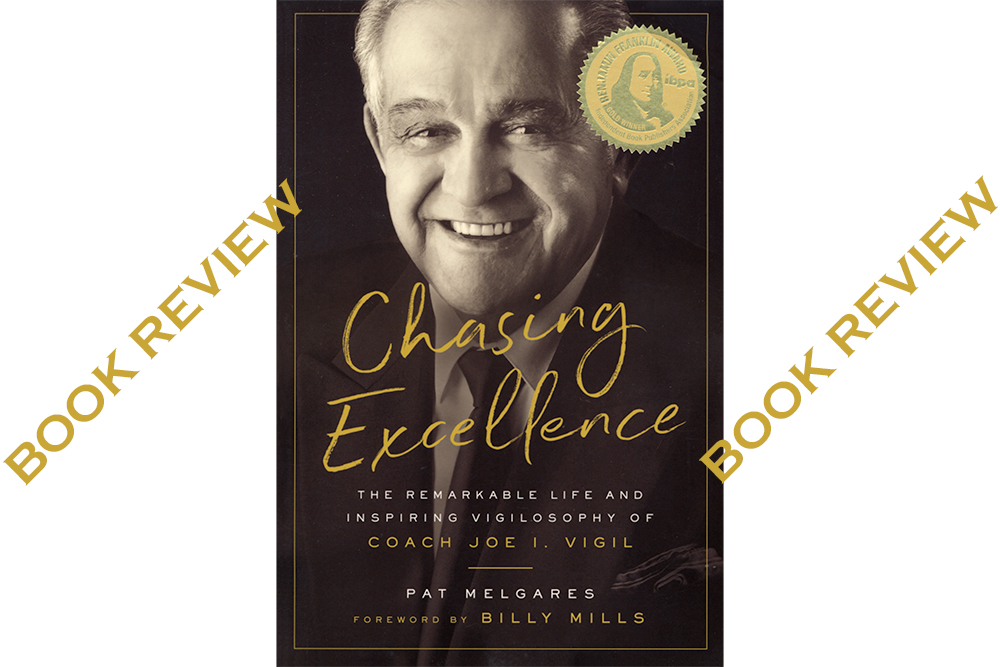 YOU KNOW OF, or at least have read about, those rare individuals. The new coach who takes a moribund program and turns it almost overnight into a championship dynasty. The person in a group who, when he talks, everyone stops and listens. The coach who by force of personality inspires seemingly ordinary athletes to outdo themselves, to win medals and championships.

These leaders of men and women are not all the same. Some exude great energy and enthusiasm, some inspire via quiet confidence. Some are great recruiters, snatching the best young athletes for their programs. Others succeed by developing home-grown or overlooked talent.

Joe Vigil is one of these rare individuals. And he is all of the above. Chasing Excellence: The Remarkable Life
and Inspiring Philosophy of Coach Joe Vigil, by journalist Pat Melgares (a former Adams State runner), documents Vigil’s life from his modest beginnings to success as a teacher and track coach at Alamosa, Colorado High School and then to Adams State where he forged a true NAIA distance dynasty over a 29-year period, and to co-coaching at Mammoth Lakes, guiding Deena Kastor to Olympic marathon bronze and other successes.

Much of the story is told via testimony from his former athletes and fellow coaches. From their reports Vigil can walk on water; he is a demigod, mentor, friend, universally loved and respected.

Too good to be true? Yes. Energetic leaders like Joe rub some folks the wrong way, and the saddest chapter in the book is an account of when he was pretty much forced out at Adams State, presumably due to a few others in the athletic department jealous of his success.

Joe bounced back quickly in ’01, taking the reins with coach Bob Larsen at Mammoth (Team USA California) with the aim of making American distance running more competitive internationally. Now in his ninetieth decade, Vigil still continues to coach and lecture and impress runners and listeners.

Conscious in his earliest coaching days of his lack of knowledge about the sport, he became a lifelong student of the sciences connected to competitive running improvement. This led to perhaps his most important track & field legacy, the USATF Coaching Education program, which he advocated, founded and developed with Vern Gambetta, Gary Winckler, and Al Baeta, a program which is recognized as one of the world’s best. Vigil was the founding national director of the enterprise 1981–89.

The awards have been many, including 11 Hall Of Fame inductions, a number of honorary degrees, national and international tributes, including the IAAF Coaching Achievement Award in ’18 and a USATF Lifetime Coaching Achievement Award in ’05. These are all rewards for a job well done and recognized at the highest levels, but ask Joe what the secret of his success was, I think he’d answer simply: “Get up in the morning and live right,” a direct quote from one of his talks.

Chasing Excellence is available from Soulstice Publishing (www.soulsticepublishing.com) and from amazon.com at $19.95.