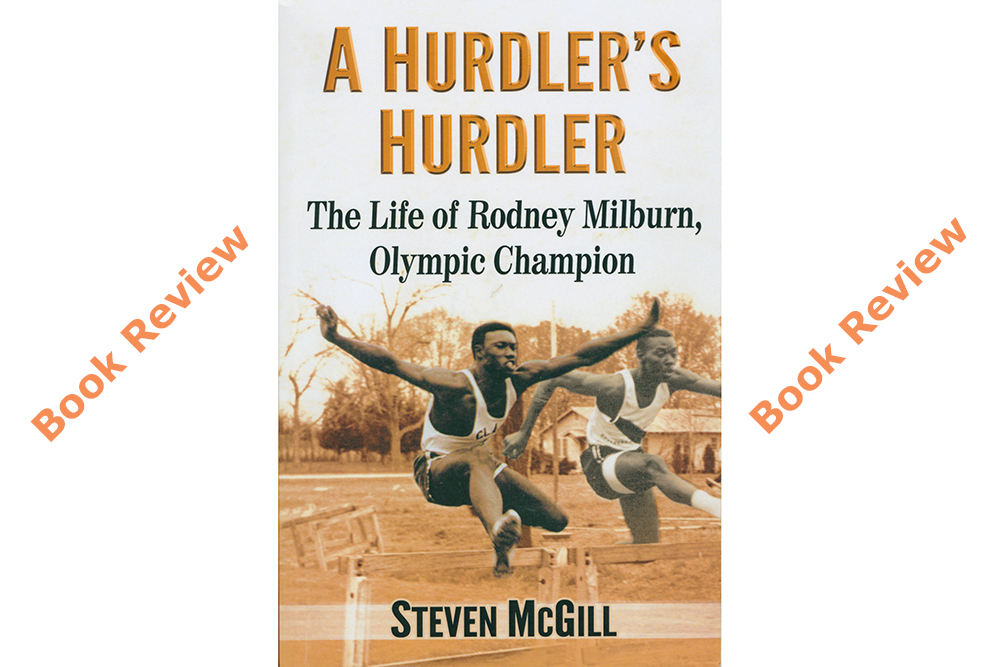 This is a book meant to be a paean to the great hurdler of the early 70’s, ’72 Olympic champion and multiple World Record setter Rod Milburn, but in the end it makes depressing reading. It was an era when track athletes were supposed to be amateurs—no shoe contracts, no prize money, no subsidies from foundations or national bodies. Milburn, just 22 when he won gold in Munich, was not alone as someone who reached the pinnacle in his event and yet struggled to make ends meet. We have recently reviewed the life stories of Wyomia Tyus and Dick Fosbury, neither of whom had real financial or other incentives to continue in the sport after their Olympic triumphs. Same story with Milburn, though he had even fewer non-track options than the personable Tyus and the would-be engineer Fosbury. Nowadays, if you are as good as these athletes were in their day, you can make a decent living from the sport, and you can continue over two or three Olympic quadrennia.

Reluctantly, feeling he had to support his family, Milburn joined Mike O’Hara’s ITA group, and earned a paltry bit of pocket money in the few years he was on that “professional” circuit. That was a decision he was to regret bitterly later when IAAF and national rules for a time barred the pros from the defunct ITA from further Olympic aspirations.

Reinstated, conditionally, as an amateur, Rod was then in his 30s, and unable to compete with the new blood in the sport: Renaldo Nehemiah and Greg Foster, especially. But he persevered as a 3rd and 4th and 5th placer in meets in Zürich and Houston and Westwood and elsewhere. He continued to have unrealistic dreams of becoming a world beater again, until advancing age and poor results showed him the truth.

Steven McGill, a high school English teacher and a track coach well known for his hurdle expertise, assumed the job of writing the Rod Milburn story, and he has produced a readable, authoritative memoir. The account is backed by many informative quotes from Nehemiah, hurdlers Tonie Campbell, Willie Davenport and Tom Hill, all revealing sides of Milburn’s personality, and their respect for him and his place in the history of the sport.

There is a lot of speculation about Milburn’s shocking death, but no real answers. Found face down in a railroad car full of deadly crystallized sodium chlorate, a car that was part of his responsibilities at the Georgia Pacific paper plant, the police report concluded accidental death. But…was he pushed? (Supposedly he’d developed some enemies among his fellow workers.) Or did he take his own life? (His wife and kids had moved to Houston and he was having increasing financial problems; he was living with no fixed residence, he disliked the job and his life was at a low ebb.)

So, the book reads like a tragedy. Here was Rod Milburn, from the tiny town of Opelousas, Louisiana, who found, at least for a while, that he could do a singular physical activity better than anyone else in the world. He became an Olympic champion and has 5 entries in the IAAF’s World Record Progressions book, 1971 to 1973. The final one, 13.24 in winning the Olympic gold, lasted 5 years. He was a supernova who, because of the financial rules of his sport, flamed out after a too-brief time at the top. Under today’s rules, he might have had a profitable career of a dozen years, and perhaps a small nest egg to see him through retirement.

He did have a chance to coach at Southern University, his alma mater, for 3 years, but it was a different era: historically black colleges and universities (HBCUs) that once nurtured champions like Milburn, Davenport and Jim Hines, were now losing the best African-American athletes to the big powerhouses. Still the general consensus was that Milburn was running a good program. A new take-no-prisoners athletic director at the school came in to clean house and Rod was out of perhaps the one job at which he might have had some long-term success. Regrettably, it was downhill from there, and Rod Milburn was dead at age 47.

« From The Editor — The IAAF Rankings Run Into A Roadblock
Book Review — Tigerbelle: The Wyomia Tyus Story »
Get Full Access

Morgan McDonald And The Badger Tradition

Dani Jones And The Colorado Mindset

Aleia Hobbs Ready For The Next Step