THE PRODIGY DELIVERED on her promise Friday night at Hayward Field. Sydney McLaughlin, the wunderkind of the 400H, circled the track in a time, 50.68, that made even the most seasoned observers, people who had been watching her closely for years, sit back and say, “Whoa!”

Even the 22-year-old New Jersey native had to sit down and take a few minutes to absorb just what a number like 50.68 signifies.

For one, it means that outside of McLaughlin herself breaking her own mark, she has effectively put the World Record out of reach for the foreseeable future.

It has also brought the track world to the point where it can imagine (fantasize?) McLaughlin doing the unthinkable and going under the 50-second barrier. Crazy? Tell that to everyone who had their eyes flitting between the clock and McLaughlin running in after the final hurdle.

It also might mean that McLaughlin may cast her eyes to other events and other challenges.

Yet, she says, it may not have been the perfect race. “I didn’t get to watch it, so I’ll have to go back and do that and talk to my coach, but I think always more to improve upon,” she told the assembled media. “I think we’re pushing the bounds as a sport, especially in our event, of what’s possible in this race. So I definitely think there’s always more that can be shaven off for sure.”

She later adds, “I think there’s so much more to go. We’re all figuring out that, yes, there’s 10 barriers, but we can run ’em a lot faster than people think. There’s no such thing as a perfect race, but I still think that wasn’t even a super-clean race. I knew that the time was possible. The numbers don’t lie and Bobby [Kersee] is really good with numbers. So I just had to trust him and trust my training and go out there and execute the best race I could.”

For McLaughlin, that quest for perfection goes a long way back. The daughter of Willie McLaughlin, himself an OT semifinalist in the 400, she took down the national frosh-clash record in her first season at Union Catholic High in Scotch Plains. The next year she won gold at the World Youth (U18) Championships. As a junior she made it to the Rio Olympics, where she placed 5th in her semi. Her senior year of high school brought her the World Junior Record of 53.82.

A single year at Kentucky gave her the NCAA title and her first World Ranking. In ’19, her first full year as a pro, she ran a best of 52.23 and took silver at Doha, just 0.07 behind the WR of Dalilah Muhammad, 9½ years her senior.

Since then, McLaughlin has rocketed off on a trajectory that no longer sees her following anyone’s lead. Undefeated in her specialty since Doha, she has drummed out a series of new World Records: 51.90, 51.46, 51.41, and now this monstrous 50.68, the biggest improvement of the event’s standard in 45 years.

For those who aren’t other-worldly gifted, she had to explain what exactly it feels like to run that fast: “I would definitely say it’s a flow state. Just putting everything that you’ve done in practice into the race, to the point where you’re just letting your body do what it does, and you’re not overthinking it. You’re just releasing the gifts and talents that God’s given you. And I think those are the best races that I’ve ever run are the ones where I’m just releasing the gift that I’ve been given.”

This was appreciably different, she says, than the experience of setting her previous record at the USATF Championships. “Just knowing that this was a big stage race, knowing that the crowd was full and I have really great women that I’m racing against — not to say that I didn’t have it there, but I just knew that the pressure was definitely gonna be there tonight. That was a great indicator. Just me figuring out my stride pattern at the U.S. Trials. And then now just putting it all into play on the biggest stage possible.”

As is her practice these days, she credits God first, then Kersee. She seems loath to take any personal credit for the things her legs can do. As she explains her ingredients for success, “No. 1 I would say is my faith and just understanding that it’s not about me. I’ve been given a gift and a platform, but it’s not for my own glory. And I think that’s helped me stay out of a lot of things that could get me into trouble.

“No. 2 is my support system. I have great people around me just making sure that I’m staying on the right path of what I know is tried and true.

“Three is just self-control of just understanding that there’s a big platform where people from all over the world can access you and I limit my social media, I limit how much I’m on those things because ultimately they cannot help me when I get on that line.”

Though McLaughlin herself refuses to call this latest a perfect race and says there are improvements to be made, one implication of just how fast she has run is that perhaps — and it’s fair to wonder about this if not ask the question — she has already conquered every challenge the 400H has to offer, and will she be looking with interest at other events?

“It’s a great question,” she concedes. “Bobby’s always coming up with new ideas, so it’s hard to pin down one, but there’s talk of doubles. There’s talk of switching. So, honestly I have no clue. I haven’t even talked to him after the race, so that’s something we’ll go back home after the season, discuss, see what we wanna do and if it makes sense.”

In plainer terms, she told NBC that she and Kersee are going to “decide if this is still an event that I even want to do or if we’re going to find something else, because I think we’ve accomplished so much in it, but there’s more to the sport and there’s more I want to try.”

She mentions the 400 as a possibility, as well as the 100H. “If we want to expand and do something else, we’ll go from there and see. The sky’s the limit.” 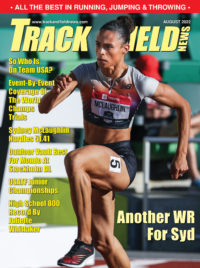