IT WAS A LIFE-TRANSFORMING weekend in Eugene for Tobi Amusan.

In the space of hours the 25-year-old Nigerian hurdler went from a face in the crowd to a face of the sport when she followed up a World Record 12.12 with her first world championship, a windy 12.06 that all seemed to come out of nowhere.

So in the immediate aftermath of a WR, how exactly had Amusan’s life changed? The answer comes in the most tangible of ways.

“I’ve been eating a lot of bananas and coach has me chugging water down my throat,” Amusan said of her two hours between WR and gold medal. “I’m not one to drink a lot of water but that played out well. Maybe I’ll drink water all year long.”

Even in the biggest of moments, Amusan’s focus is on the little picture, a simple philosophy of “execute and times will come.”

Her times came in stunning fashion Sunday in what may have been the biggest shock in a week full of them. Amusan didn’t come into this race anonymous, she was 4th in the last two majors, was picked to repeat that in Eugene and was elevated to medal favorite when Alaysha Johnson didn’t make it out of the heats.

UTEP alum Amusan has a ’17 NCAA win on her résumé, but she didn’t always look like someone about to run 12.12. Coach Lacena Golding-Clarke — herself 5th in the ’04 Olympics for Jamaica — knew otherwise in the days leading into the WC.

“When we got here [10 days before her record], we did a run over 10 hurdles and I was like, ‘Oh my stopwatch, I didn’t get the right time,’” says Golding-Clarke, who along with Amusan is relocating to Auburn from El Paso this offseason. “I thought, ‘But I did get the right time.’

For the record (not literally), that time on Golding-Clarke’s hand-held watch was 11.96, which probably translates to around a 12.20 FAT.

Amusan became the first Nigerian woman to hold a WR and the second UTEP alum to hold one in an Olympic event after Bob Beamon.

Amusan’s reaction on seeing the scoreboard Sunday was focused, and in the Amusan way, practical.

“adidas better write me my check,” said Amusan, who is running in the German company’s distance spikes after a bout with plantar fasciitis at the beginning of the year led her to seek a softer shoe.

“I was thankful to come out with a win. I wasn’t expecting a World Record in the finals, the goal was just to get the win.

“I believe in my abilities but I was not expecting a World Record at these championships. The goal is always just to execute well and get the win. So the World Record is a bonus. I knew I had it in me but I could not believe it when I saw it on the screen after the semis. It was just a matter of time. And I am thankful.”

Amusan also quipped that she didn’t know it was her
World Record: “I saw it on the heat sheet, ‘Yee hooo, who did that?’” Then: “Relax, execute, the time will come.”

Over the course of her career she’s developed that patience. Amusan admits she didn’t always have that quality, that she entertained changing coaches after last season. In ’21 and ’19 she set PRs a month after the major championship, leading Golding-Clarke to figure a way to move her peak forward.

There could have been a concern Sunday that she had peaked two hours too soon, but that wasn’t the case. Running in the final as a favorite, something she hadn’t done since the ‘17 NCs, proved no problem.

“I just tried to control my nerves, I knew it was going to be pressurized heading into the finals knowing I was the favorite,” Amusan said. “I just said to myself this is another round. I’m not going to pressurize it because it’s the finals.

Golding-Clarke is the one who knew Amusan’s day was arriving. “She can handle anything now,” she says. “She said, ‘Coach, I finally, finally figured out how to win.’ The calmness. ‘My palms aren’t sweaty, I’m so calm, coach.’ I told her she’s ready. ‘You’re more ready than you’ve ever been.’”

That all came true on a Super Sunday that changed Amusan’s life. 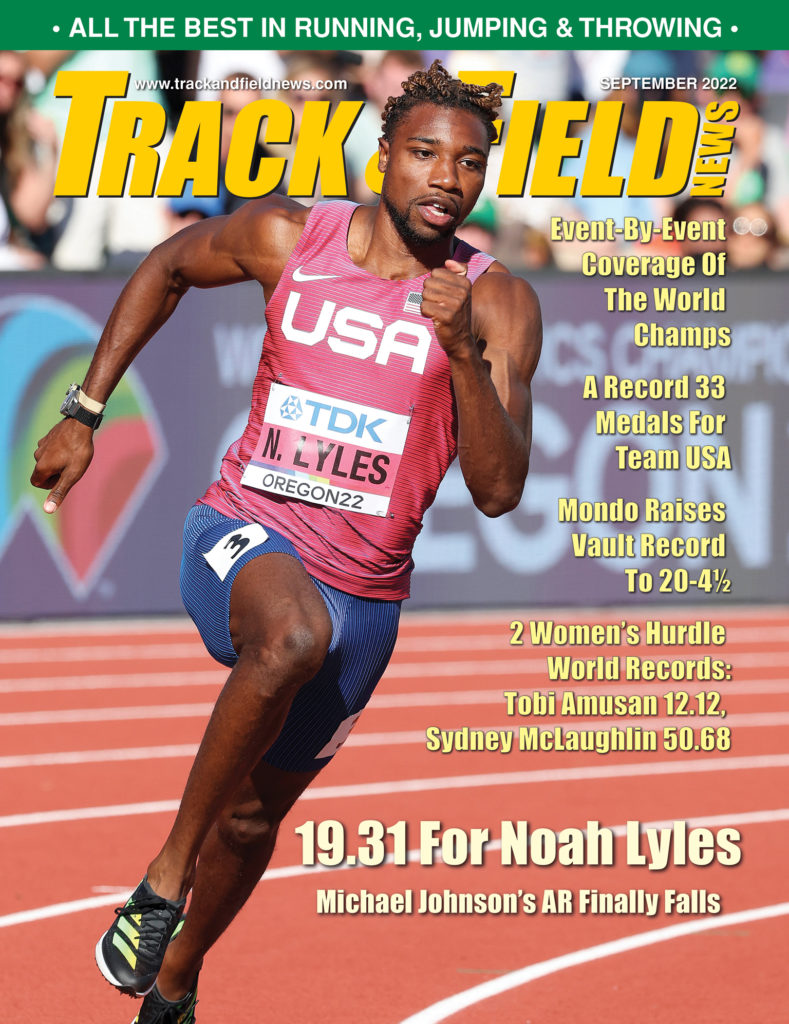