Jon Roy Hendershott, part of Track & Field News for more than 50 years, died peacefully on Monday at the age of 71 from complications from a stroke he suffered at his home in Salem, Oregon, on Sunday.

If you ever read T&FN, you knew his name. Track was his life and he lived it to fullest. He enjoyed people and often said, “Every person has a story to tell.” He was right and boy did he tell some stories. Probably too many to count.

Jon was born in Bend, Oregon (something he greatly enjoyed telling Ashton Eaton), not that long after the end of World War II, to Bob and Margaret Hendershott.

Jon’s birth on a Saturday would be the first of many more weekend days filled with the sport he would love. The scene was set for Jon’s path in track all around the world, a path that would twice finding him enjoying his birthday at an Olympic Games.

Bob had been a very good pole vaulter both in high school (Oregon state champion) and at the University of Oregon where his coach was the famed Bill Hayward. Jon’s dad was also a starting player on the Duck football team. After college, he was a Navy pilot in the Pacific during World War II.

When Jon was born, Bob was coaching high school track in Bend. The Hendershott family of four moved to Klamath Falls, Oregon, where Jon’s dad coached high school track. Jon’s older brother Bob had an interest in track and it was inevitable that Jon would turn to the sport.

Jon was only 11 when he was diagnosed with diabetes, a disease he would live with for the next 60 years.

The family made another move, this time to Seattle, where father Bob took a job as assistant coach at the University of Washington. It was in Seattle that Jon really became bitten by the track bug. He fell in love with the sport as a competitor in junior high school and at Roosevelt High. The hurdles were his events and the Olympic Games were his goal.

It was in Seattle in ’62 that Jon heard about a magazine devoted to the sport he loved and by the end of the year he was subscribing to Track & Field News. Little did he know (maybe) that this would be the start of a 56 year relationship with the magazine we all love and know.

Many high school athletes probably dream of competing in the Olympic Games for their country and little did Jon know that he would “make” nine Olympic teams and 15 World Championships teams (including two World Indoors). Unfortunately, he didn’t hurdle in any of those championship meets, however very fortunately for readers of T&FN, he wrote many articles and told many great stories.

It was at Roosevelt High that Jon became a sportswriter on the school newspaper. He would continue this profession at Washington and later at San José State where he would graduate from the school of Journalism in ’70.

In the summer of 1967 Jon married Carol and two years later the couple would have a girl named Megan. That October Jon’s name first appeared in T&FN as a working member of the magazine and the rest is a history you know well.

By the early ’70s Jon’s interviews with athletes were becoming more and more interesting. He won awards for his writing and went on to be president of the Track & Field Writers of America (TAFWA).

He authored Track’s Greatest Women and edited Ron Clarke Talks Track. He brought to life many athletes and their stories from all over the world.

Trey Hardee, the Olympic silver medalist in the decathlon and two-time World Championships gold medalist, said he and Jon talked a lot about “daughters and weddings and how we never even spoke of track & field.”

Jon had a way with people and words and those who were members of Track & Field News Tours will remember his many on-stage interviews at dinners and luncheons around the world.

Jon continued his work at T&FN until his retirement at the end of ’15. In May of ’16 he moved from the Bay Area to Salem, Oregon, where he continued to do valuable freelance writing for T&FN and was also a contributor to the webpages of TrackTown USA and the IAAF.

He wasn’t always the luckiest person in life, but in a way, he was because he got to do what he loved for most of his life and so many people appreciate all that “work.”

Jon left a daughter (Megan) and her husband (Roger Rudikoff) and two grandchildren. Zackery is now an 18-year-old frosh at Boise State and 15-year-old Kailey lives with her parents in Stanwood, Washington.

Jon was the last of the Hendershott family of four to pass and it is true that every person has a story to tell. Jon will be remembered as one who told so many such stories so very well.

In the wake of our publishing of Jon’s obituary the track world responded in a large and moving manner. Here’s a small collection of notes harvested from e-mails and Twitter & Facebook postings:

Seb Coe—IAAF president
“Jon was already a writer of stature when I graduated onto the circuit. The sport has lost an erudite, passionate and knowledgeable man of athletics.”

Edwin Moses—hurdle legend
“I received the notice of Jon’s passing from my dear friend up at Syracuse, Herman Frazier, this morning. I also saw online your obituary on Jon in T&FN which really captured his essence. He was a very creative writer and very passionate man not only about the sport but about those he connected personally with as he did with me.

He will always be my favorite guy at the magazine and I will truly miss him.”

Joe Kovacs—world champion shot putter
“I am very saddened to learn of the passing of Track & Field News writer Jon Hendershott. He had such a great passion for every event in the sport of track & field. He was always very supportive and kind to me and my coach Art Venegas. He will be greatly missed!”

Jon Anderson—Olympian, Boston Marathon winner
“Totally bummed to hear of Jon’s death. He was a gentleman. Always fun to see and be around. One of those great people who you might not see for years, but when you finally crossed paths again it was like you saw each other the day before. We welcomed him back to his home state a few years ago. We say goodbye much too soon.”

Pat Winslow Connolly—Olympian & coach
For many years I spoke with Jon on a regular basis—about life, his daughter, my kids, and most of all, athletes I was coaching. To women’s T&F, he was a blessing; helping us establish some parity in the media and thereby get access to “equal pay” when the sport went pro. He will be missed, immensely.”

Al Joyner—Olympic triple jump gold medalist
“Jon, you will be missed; thank you for always writing great articles on our family over years of great sportswriting. My condolences to your family. May you rest in heaven. You will be missed by the Joyners, track fans forever.”

Trey Hardee—world champion decathlete
“No one wrote about us more eloquently than Jon. He was kind, genuinely cared about us, and we will miss him. My heart aches for his family and I selfishly wish he could pen one more line about the sport he made us all love so dearly.”

Ruth Wysocki—Olympic 1500 finalist
“I knew that I was starting to make it as an athlete when T&FN writers Jon, Scott Davis & Tom Jordan would greet me and actually knew my name. Over the years, we would get together and tell stories, whether at the National Champs in Eugene, the Olympic Trials and Games in Los Angeles, or at some stop on the European circuit. The jokes and BS would fly! It is a sad day today. RIP Jon!”

Kory Tarpenning—Olympic vault finalist
“Very sad news. My condolences to his family and all at Track & Field News. He will be missed!”

USATF
“We have lost a great friend to our sport. Thanks for all you’ve done, Jon. Your warm smile, commitment and love of athletics will be missed.”

Deena Kastor—Olympic marathon bronze medalist
“What a gift he was to this sport. What a loss this is for all of us. Thanks to this track & field community for the support as we all reflect on his contributions.”

Photos of Jon plying his trade may be viewed here 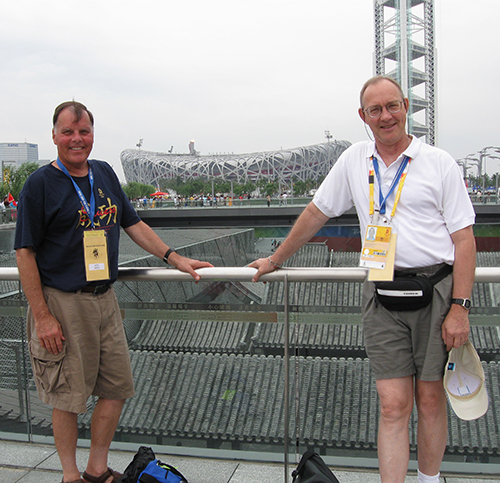