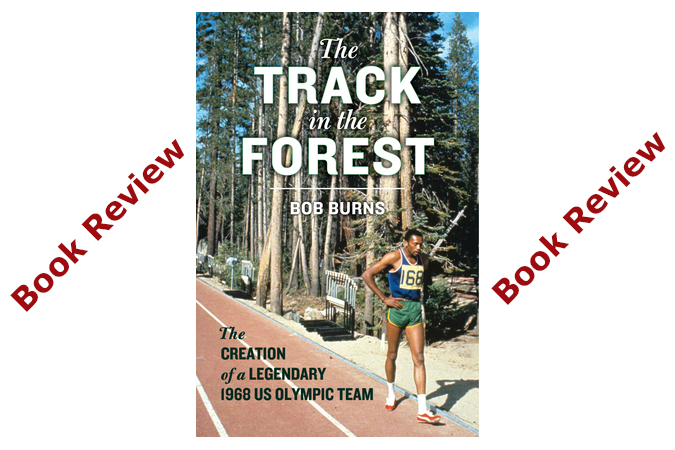 The 2020 Olympic Trials at the University of Oregon’s now-under-construction track & field palace promises to be quite special. But for an OT that was truly special, think back 50 years to ’68 ,when in an effort to have a training facility and Trials at similar altitude to Mexico City’s 7300-feet, American authorities plunked down a new 3M Tartan track in the middle of the Eldorado National Forest, not far from Lake Tahoe.

For pure natural beauty, the Echo Summit, California, site was one of a kind—an oval in the wilderness constructed around towering stands of ponderosa pines. Runners would disappear behind the trees, appearing to spectators 20 or 30 seconds later.

Veteran Sacramento newsman Bob Burns has crafted a new book which tells the story of this miracle-in-the-woods, how it all came together and how as a 6-week training and Final OT site for the men’s team it produced—by design or inadvertently—one of the most celebrated Olympic teams in history: 12 gold medals (that’s 50% of all golds) and 6 World Records. The book is The Track In The Forest: The Creation Of A Legendary 1968 US Olympic Team, which is being released by Chicago Review Press on October 2, and it brilliantly brings to life those historic days.

Burns masterfully describes the lead-up to the Trials in the context of the social and political turbulence of that Olympic year: Vietnam war protests, serious racial unrest, horrific assassinations, Soviet tanks in Prague, and particularly the uncertainties created by Harry Edwards and the Olympic Project For Human Rights (which culminated in the famous victory stand protest by Tommie Smith and John Carlos in Mexico City).

This is all meticulously researched and complemented by dozens of interviews and quotes from leading characters such as Bob Beamon, Ralph Boston, Dick Fosbury, Lee Evans, Smith and Carlos, Harold Connolly, Payton Jordan and many others. I had forgotten how close Fosbury came to not making the team. A straddler would have won at Mexico City and the flop revolution might have been postponed.

Burns handles the drama and the heartbreaks of the actual Trials extremely well and with enough detail to satisfy the hardcore track fan. And he finishes the job by providing a full account of the American men’s team in Mexico City: how the world’s No. 1 miler, Jim Ryun, could not match Kip Keino’s environmental advantage (but don’t forget that Keino, at 7300 feet, ran the second fastest 1500 ever, and he never ran as fast again); how Tommie Smith’s left leg held up enough in the 200 final to allow him to set an amazing world record; Al Oerter doing it again, his fourth straight Olympic gold; and no Harry Edwards in Mexico City (it was decided somewhere along the way that there’d be no boycott and each athlete “would do his own thing.”)

One does have to wonder if that Echo Summit project was all worth it; wouldn’t the U.S. men’s team have done just as well by training, say, at Stanford or UCLA, sending the distance runners to Alamosa? I’m just sayin’… But then we wouldn’t have this lovely book which recaptures a time of larger-than-life track heroes during one of the most tumultuous years in American history. Great job, Bob.