IT’S THANKSGIVING EVE as I write this. In a year where I’m exceedingly happy for the world as a whole in the sense that we seem to have discovered the way out of the worst of the C19 mess, I have plenty of track specificities to be thankful for:

I’m thankful that the Olympic Games — and as a precursor, the Olympic Trials — against all odds managed to be raving successes, even without a full boat of spectators.

Similarly, I’m thankful at the return of my favorite annual domestic meets, the Prefontaine Classic and the NCAA Championships.

I’ll be even happier next year when the Millrose Games returns indoors and the U.S. spring season once again sees the huge relay meets — Drake, Mt. SAC, Penn & Texas — in full flower. And more thrilled when every one of the 50 gets to once again stage a full-blown State HS Meet.

I’m particularly thankful that some eager entrepreneurial types stepped up in ’21 with the staging of new circuits of U.S. meets: Journey To Gold, Pro Track Series & the American Track League. May Santa stuff their collective stockings with the wherewithal to give it a go again in ’22.

I’m thankful that I am now faced with the dilemma of voting for our Athletes Of The Year, who will be featured in the next issue.

How do I separate Ryan Crouser from Karsten Warholm on the men’s side of the AOY ledger? Do a pair of 400H World Records outweigh an absolute shot WR after an indoor one, backed up by an avalanche of barrier-busting puts?

Yet sorting out the men’s side is going to be easy-peasy compared to the women.

Sydney McLaughlin had a pair of 400H WRs and Yulimar Rojas claimed the TJ best, but the can’t-be-ignored candidates don’t stop there. How about Sifan Hassan, with 2 Olympic golds (5000/10,000) and a bronze (1500)? Plus a broken-later 10K WR. And attention must be paid to sprinter Elaine Thompson-Herah with a pair of Tokyo golds, the 100 won with the fastest wind/altitude-adjusted time ever.

And I’m thankful for the continuing emergence of high school talent, particularly the out-of-nowhere Hobbs Kessler, who claimed the national 1500 record. Where do they hide these kids?

I was also thankful to see the breakout campaigns for two other teenagers, miler Cole Hocker (admittedly a half-year teen) and Athing Mu.

Mondo Duplantis was only 21 during the season, and even though he produced “only” a single 20-footer this year, I’m thankful that he remains one of the best ambassadors of the sport, his ongoing mastery of one of the most technical of events thrilling crowds the world-round.

About as far from a kid as you can get on the international scene is Allyson Felix, and I’m thankful that she made her Olympic swan song a medal-winning one.

I’m thankful that the new version of Hayward Field, the subject of so much hoopla during its years of construction, turned out to be everything that one could have hoped for. Here’s hoping that when normalcy returns we’ll discover that the number of seats is just right for staging smaller meets as well as expanded-room affairs like next year’s World Championships.

I’m thankful that after years of foisting the “student-athlete” concept on us the NCAA saw that it was going to be on the wrong side of history and ditched a big chunk of its outmoded amateurism stance. I’ll be even more thankful if/when it’s confirmed that tracksters can actually win money (even if its held in escrow until after the athlete is done with school) at the WC or on the DL Circuit.

I’m thankful that WA is well on its way to fulfilling one of Seb Coe’s long-held goals, calendar reform. While I can’t agree with all of its positions (see my April column, Why Does WA Undervalue NCAA Competition?), it’s nice to see so many meets now slotted into logical places in the hierarchy, and for major-meet conflicts to lessen. 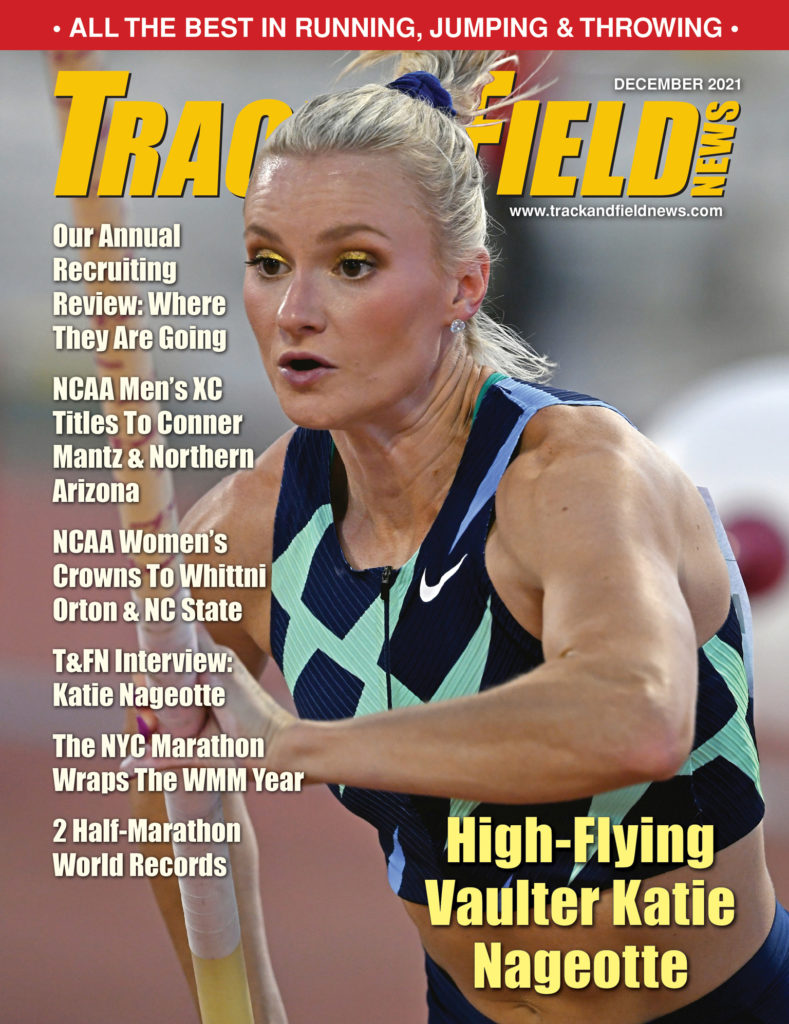