IN THE WAKE OF THE SUPER BOWL, a popular question in the sporting world became, “Is Tom Brady the G.O.A.T?” (For those unfamiliar with the term, which I don’t recall being in the lexicon until about 20 years ago, G.O.A.T. stands for Greatest Of All Time, something Maurice Greene celebrated with a tattoo in the early 2000s.) Even though Brady is clearly not a unanimous choice as football’s greatest, there are those who go so far as to think of him as the greatest of all G.O.A.T.s.

What does that have to do with us? Well, a writer for nfl.com picked his G.O.A.T.s from 16 different sports and ranked them (Brady was indeed his football pick, but only as No. 7 overall; the No. 1 honor went to Michael Jordan). He fudged at 12 and 13, calling that a tie between Usain Bolt and Jackie Joyner-Kersee. In this corner it says that of the four he got only JJK right (although that may well be slighting Irena Szewińska). So why not Bolt?

Let’s go back to the March ’00 edition, where in celebrating the bests of the 100 years that had gone before we put Jesse Owens on the cover, citing him as “Trackster Of The Century.” But as my column in that issue explained, we weren’t choosing the Buckeye Bullet as the best performer, just the most influential. Our panel’s (and my) choice for No. 1 was Carl Lewis. 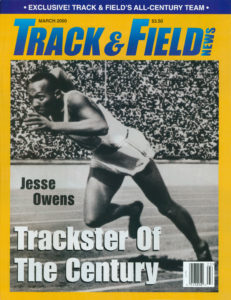 Much has changed since then, most notably the arrival on the scene of Bolt, who at that time was a 13-year-old still a year away from showing up on lists as a promising 21.73 performer. It wasn’t until ’03 that the Jamaican Jet made our World Rankings, but from ’08 through his final season in ’16 (and some would say even now, almost 3 years after his retirement) he became the face of the sport. The big question is, did he do enough to supplant Lewis as the sport’s G.O.A.T.?

This corner says no, and here’s why.

Putting the two events together, Bolt leads in points 188–184. Where Bolt gains some traction is in the World Record department. In the 100 each had 3 WRs (and Lewis lost a fourth on a technicality; Lewis also had 3 low-altitude WRs). But in the 200 Bolt adds another pair, while Lewis can only claim 1, of the low-altitude variety.

For all that—plus the inescapable fact that had World Championships been held in ’85 and ’89, in the peak of his career, Lewis’s medal count would rise markedly—I give the narrow edge to Lewis, aided mightily by his amazing length of career. You, dear reader, may of course interpret it differently, but aha! that allows me to play my trump card. Lewis as long jumper.

There’s nothing in Bolt’s arsenal to compare with Lewis in what was his best event of all, where he’s clearly the G.O.A.T. even if the biggest bauble—the World Record— escaped him. 4 Olympic golds about says it all (with a pair of WC golds as well). The 148 points he amassed in his record 17 seasons in the Top 10 trail only javelin thrower’s Jan Železný’s 154 in any single event. Counting points in all events, Haile Gebrselassie (5000/10,000/marathon) has 230 and Bolt has 188. They’re not-even-in-the-picture Nos. 2 and 3 on that list. Lewis’s 3-event total is a stunning 332. And let’s talk about overall No. 1s, where Lewis has 18. Michael Johnson is next at 15, with Bolt =No. 5 at 12. QED.

Oh yeah, almost forgot: a tip of the hat to a pair of legends who dabbled with high jumping before going on to become their sport’s real G.O.A.T.s: Joe Montana & Wilt Chamberlain. □