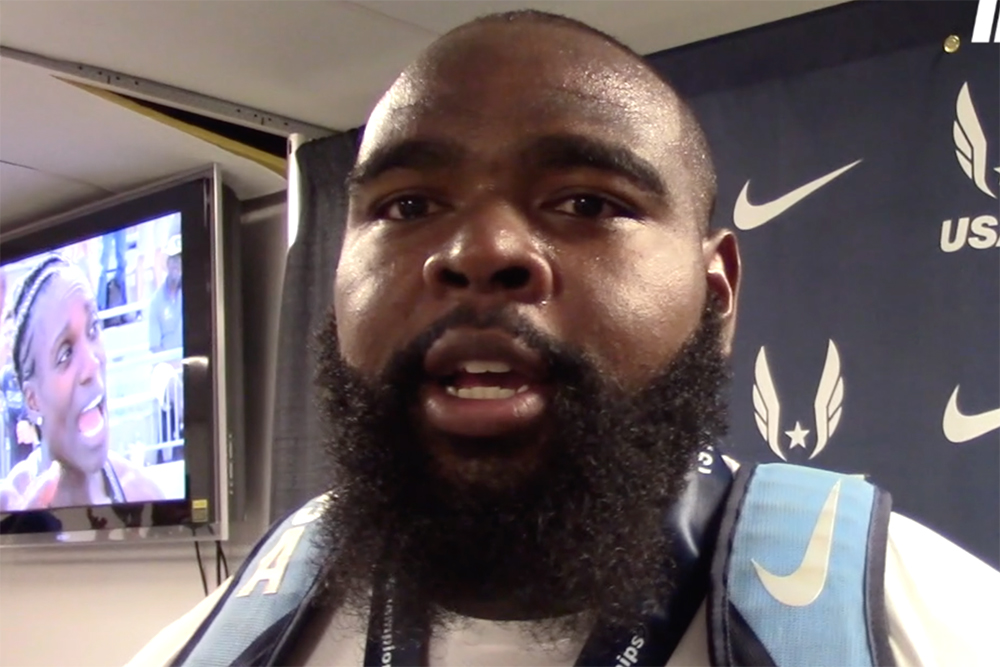 ”We’re in a period of time where I think it’s time for real change and I can be a part of that change.“

NO AMERICAN OF CONSCIENCE stands immune, untouched by the video we all watched after Memorial Day: the agonized death of George Floyd, a Black man, beneath the knee of a white Minneapolis police officer who stared emptily at an onlooker’s camera with a hand in his hip pocket until Floyd breathed no more.

For elite shot putter Darrell Hill, who is Black, spectacularly muscled and tattooed, the sense of grief and anger cut closer to the bone—let’s admit this must be so if we are not African-American—than for those born on the other side of the nation’s shamefully enduring racial divide.

Later the same week as protests erupted around the country Hill—certainly not alone among athletes in our sport—took his anguished thoughts public with an Instagram video. (Continued below)

Open your ears. Open your eyes. I hope you listen in its entirety. Stand with us. I love you ❤️✊?

Hill, World Ranked in the shot the past four seasons and No. 8 on the U.S. all-time list, was on the must-call roster for a sport-we-all-love event analysis series T&FN is rolling out this month. Bigotry and oppression are bigger than sport, though. This painful national moment and Hill’s heartfelt opinion could not be ignored so we broached the topic, asked if, exhausting as it must be, the Doha World Champs 5th-placer had anything more to add. He did.

“I’ll always be able to throw a shot,” Hill said. “I don’t worry about that at all. But we’re in a period of time where I think it’s time for real change and I can be a part of that change. So I’ve been pushing a lot of my efforts, even though it’s been tough, to have a lot of these conversations and try to move the needle a bit if I can help it.”

Here, in part, is what else Hill had to say.

“Pretty much everything I said in the video still kind of rings true to me today. It’s a tough time for all of us. Obviously Black Americans, well, all Americans. It’s a tough time for us as we try to heal from the death of George Floyd. We’re dealing with the symptoms of the death of George Floyd, but truthfully we’re still dealing with the pain of all of these other murders: Ahmaud Arbery, Breonna Taylor, Michael Brown, I mean all the way. It’s just like stacked on top of each other, this kind of repetitive injustice.

“You know, it’s just been a heavy feeling for years. It’s kinda been a boiling point up to today. So I still feel the same way, you know, still reaching out to all of my people and reaching out to people from all walks to try to stand with the courage of movement. Obviously things have transpired since I made that post: a lot of riots, a lot of protests—some peaceful, some not—a lot of organizations and people reaching out communicating that they hear our plight, they want to help induce change.

“They want to be a part of the solution and not be a part of the problem, which has been good to some extent. You know, it’s always good to raise awareness, hear people say that they stand with you. But further than that, I’m looking for action, from a lot of companies, a lot of people in general. I figure I’ve heard the cries, I’ve heard the communication, but in regards to that now we’re kind of in the action space.”

“Well, it’s a lot of self-reflection at first. The first step in regards to true long-term healing is for people to kind of sit back and understand that the status quo as we’ve known it has not been OK. Although people have been comfortable, it hasn’t been comfortable for everybody and having the understanding that we need to change, I think is step one. And I’ve seen a lot of that take place. That’s kind of been the first phase. A lot of people are kind of realizing, ‘OK, things are not OK. We need to change.’

“I think it’ll take a lot of voting, and that’s kind of the toughest part also. People understand the plight of African-Americans in this country but it may not align politically. So getting people on the same page in regards to putting people in offices—whether it be local, on a state level or on a national level—that can help to make sure that we’re using our vote to elect candidates who represent our issues and want to help solve those problems.