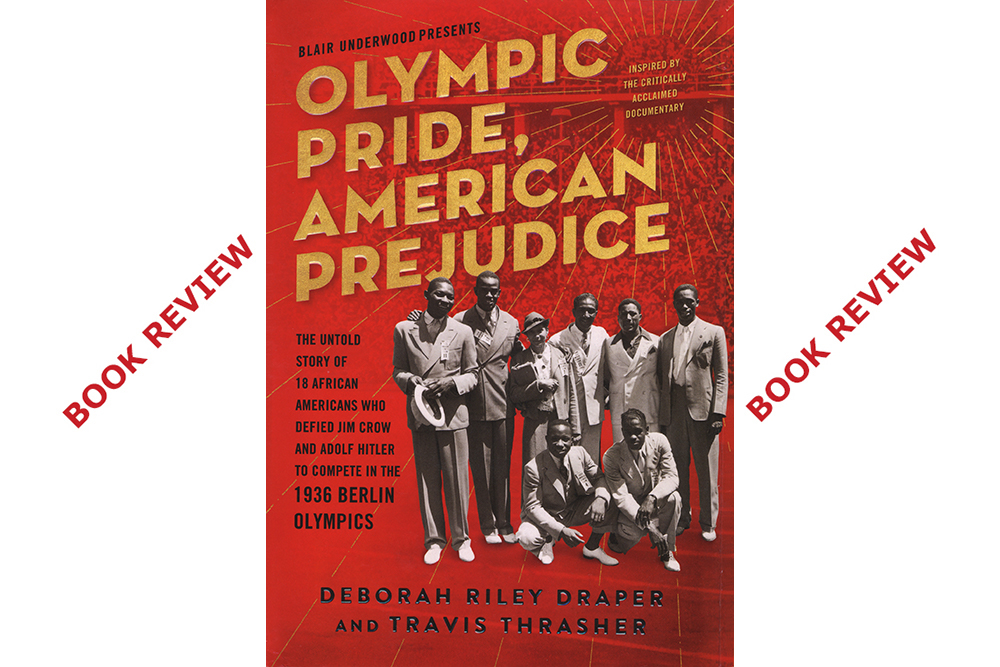 I CAN’T IMAGINE there are many still alive who were there, but if I had to pick one historical non-Olympic track meet to be at it would be the ’36 Men’s Olympic Trials at Randall’s Island in NYC. That event was the christening of Downing Stadium and an average of 15,000 were on hand to watch Team USA select itself.

Those who went on to Olympic glory are etched in the brains of every track fan with even a minor historical bent: Meadows, Hardin, Cunningham, Towns, but perhaps more importantly it was a coming-out party of sorts for the Black American track athlete: Jesse Owens, Cornelius Johnson & Dave Albritton (who both broke the high jump WR at this meet), Archie Williams, and Ralph Metcalfe (who had won two silvers in ’32).

Those Trials get good coverage in this new book by Deborah Riley Draper & Travis Thrasher, but the main thrust of Olympic Pride, American Prejudice is everything leading up to and through the ’36 Olympics, the 18 African-American athletes who qualified for the team, and the bigotry and indignities experienced by those athletes. The book was inspired by a ’16 documentary film produced by noted actor Blair Underwood.

The authors focus on Metcalfe, Mack Robinson, Williams, James LuValle, John Woodruff, and the two Black women team members, hurdler Tidye Pickett and sprinter Louise Stokes. This was still the Jim Crow era, when lynchings were common in the South and a significant percentage of Americans considered Blacks inferior. The wonderful success of American black athletes in the ’30s at the Olympics, particularly Owens—and Joe Louis in boxing—may have helped to change some minds.

As the lives of the featured American athletes are described, the rise of Hitler is also recounted. The political success of Nazism in Germany meant this would be an Olympics to glorify the Third Reich. There is a groundswell of opinion in the U.S. against participating in the “Nazi Games,” but at the ’35 AAU Convention, IOC president Avery Brundage leads the opposition to the boycott proposal. The vote is a narrow 58–56: the U.S. team will be in Berlin.

One may be struck by some parallels with the present day. In the early 30’s, in addition to the discrimination faced by the Black performers, the Great Depression significantly reduced economic and training opportunities for every athlete, due to school and business closures and cutbacks, just as today’s athlete has to contend with the coronavirus and the cancellation and postponement of competitive and economic opportunities.

Why were the Jewish sprinters Stoller and Glickman replaced on the U.S. 4×1 team? The authors repeat the standard mantra that pressure from above—Hitler? Brundage? Dean Cromwell? Roosevelt?—mandated that the reluctant Owens and Metcalfe be part of the relay foursome.

Well, if that hadn’t happened, Metcalfe wouldn’t ever have had an Olympic gold medal and Owens would have only won three, not four. And poor Louise Stokes, again left off the women’s 4×1 (she was really robbed in ’32—replaced by a white woman who hadn’t even made the team; in ’36, she was in the relay pool but didn’t have as strong a case as she did in ’32). Thanks to the German team’s dropping the baton on the last handoff, the U.S. (anchored by Helen Stephens) won gold, as of course did the men’s 4×1 (in WR time).

But without the gold and silver medalists (Williams & LuValle) the U.S. 4×4 finished 2 seconds behind the Brits. In that case Williams, LuValle and 400H winner Glenn Hardin supposedly refused to run and replace previously named 4×4 team members.

So, once again the ’36 Olympics provides fertile soil for the history of our sport, American cultural mores, and a horrific chapter in world history. But does anything change? Metcalfe, later an alderman in Chicago in the 50’s and an ally of Mayor Daley, broke with the political boss and commissioned a report entitled, “The Misuse of Police Authority in Chicago.” The more things change…

Olympic Pride, American Prejudice lists at $28.00 and is available from amazon.com or from the Simon & Schuster website: simonandschuster.com.