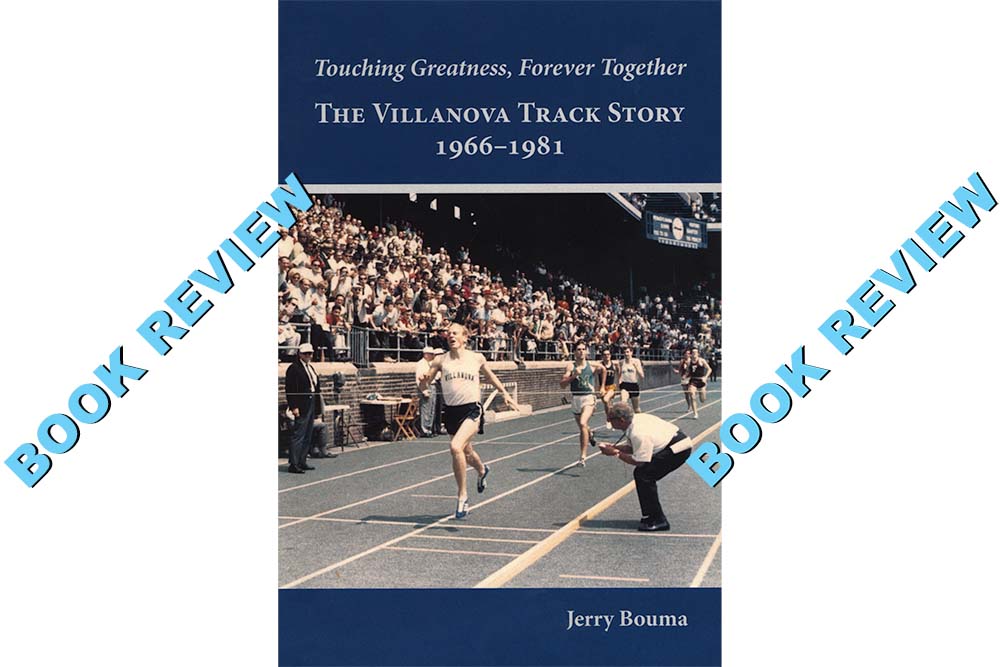 TAKE A TRIP down memory lane: back to the days of Villanova middle distance excellence, back to the days when Jumbo Elliott’s teams won 16 consecutive distance medley relays at Penn— that’s 16 DMRs in a row at America’s premier relay carnival.

Well, such success may be understandable since Jumbo was able to call on such horses as Dave Patrick (who is featured on the book’s cover), Marty Liquori, John Hartnett, Eamonn Coghlan, Don Paige, and Sidney Maree to anchor his foursomes.

Not to mention filling other slots with the likes of Frank Murphy, Mark Belger, Chris Mason, Ken Schappert, Marcus O’Sullivan and other notables.

During these 16 years, Villanova won 13 4xMile/1500 titles, 12 4x8s, and 7 sprint medley relays, which speaks to not just how talented Jumbo’s runners were, but also to the great depth of that talent.

The Villanova Track Story: 1966-1981, is authored by Jerry Bouma, himself a Villanova relayer in the early ’70s, the first Canadian recruited by Jumbo and his right-hand man Jack Pyrah.

Bouma is an insider, a confidant of many of the principal athletes in the book. The book is not perfect — Jim Grelle did not make the ’64 Olympic team, for instance—but it’s a very enjoyable read. For those of you who were Villanova fans or who well remember this era it will help you relive this period of great Villanova middle distance running—equaled on the collegiate circuit then perhaps only by Bill Bowerman’s Oregon teams, an East-West rivalry duly mentioned by Bouma.

Jumbo Elliott was not the kind of hands-on coach prevalent today. Indeed he was a busy man and his time on campus and his interaction with his runners was quite limited; Pyrah was the hands-on guy, the coach athletes could turn to any time on campus for advice or TLC.

Elliott was more of a éminence grise, a kind of omniscient, omnipotent — if not omnipresent — demigod, universally venerated by his athletes and the Villanova community. Of course, great success will do that for you. And it will get you a statue on the college grounds.

Bouma describes not just each year’s DMR but actually the whole track year, with lots of input from the runners themselves, their first days on campus, the facilities and training routines, the Irish connection, and more—basically a history of Villanova track & field for this remarkable 16-year period.

All good streaks must come to an end. Track & field wonks will remember what happened in ’82, and I’m not going to provide a spoiler here. Read the book and find out.