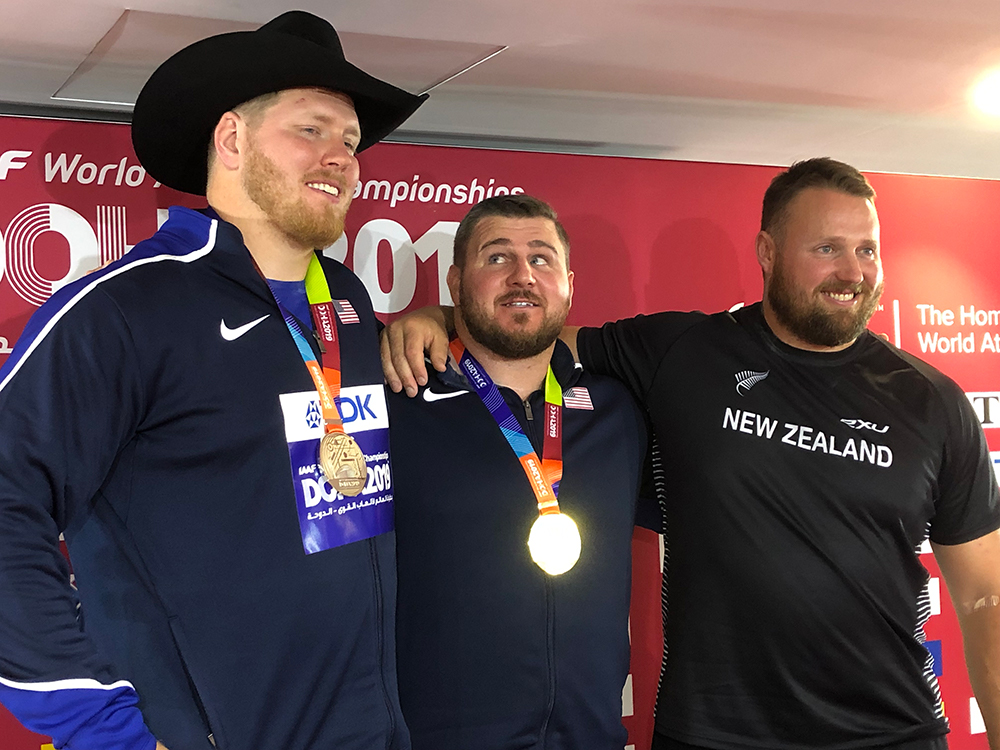 A night to remember!

Well, we said we suspected that the men’s shot could be the event of the meet… you be the judge. Favored Kiwi Tom Walsh joined the 75-foot club, reaching 75-1¾ (22.90)—and he got bronze. American Ryan Crouser joined the club by hitting the same distance—and he got silver. Teammate Joe Kovacs became the third new member of the exclusive club, plopping his ball down at 75-2 (22.91)—and yes, he got the gold. And have a thought for Brazil’s Darlan Romani, who almost unbelievably reached 73-11 (22.53) and didn’t make it to the podium. Nor did third American Darrell Hill at 71-½ (21.65). How all this played out was chock-full of drama:

The throwing order then changed for round 4: with a great yell, Kovacs improved again, his 72-¼ (21.95) causing him to swap spots with Hill. No improvement for Hill and it was Crouser’s turn. Despite improving to 74-6¼ (22.71) and passing Romani for silver, the Oregon native was clearly displeased with the throw, slapping his hands together. Walsh was again close to 74ft, but couldn’t stay in the ring. Round 5: no improvements, so for the final round the medals belonged to Walsh, Crouser & Romani. Out of the blue—Kovacs! His 75-2 (22.91) stunned everyone. Romani fouled, bringing up Crouser, now back to bronze again. Boom! A 75-1¾ (22.90) of his own, equaling arch-rival Walsh, but based on second throws, it put the American into silver position again. Walsh wrapped it up with another 74-range foul and one of the most spectacular field event competitions ever was over. Leaving hardcore fans of the event wanting a round 7, and 8 and…

Said Kovacs, “It is a time to celebrate. Coming to this competition, I was hoping for a new PR and then I saw Ryan throwing far, the others throwing far, I just cannot be happier to get the gold medal. This everyday hard work, it just paid off. This is definitely the final which made the history.”

For his part, Crouser said, “It was an unbelievable competition with a lot of fireworks in the round 6. This final was crazy and I am so happy to be part of it.”

Stunning. Coming back from the 10,000, Sifan Hassan engineered perhaps the greatest race in history by boldly breaking character and taking the lead early. She pummeled the field with an unbelievable pace, hitting splits of 63.53 & 2:05.95. At 1000, she ripped past the post in a world-leading 2:37.26. The rest of the field had no choice but to go with her, as they knew that she would not be coming back to them. Laura Muir moved up in a panic, Shelby Houlihan following, but the kickers never got a chance to kick. It took everything they had just to stay alive as Hassan passed 1200 in 3:07.41. Faith Kipeygon chased best, followed by Gudef Tsegay. Houlihan moved out off the curve to unleash her sprint, but she was unable to pass anybody. Hassan finished in a championship record 3:51.95, making her No. 2 in world history (T&FN does not recognize the Chinese marks of ‘93/97). Kipyegon got silver with her Kenyan record 3:54.22, Tsegay bronze at 3:54.38. Houlihan was clearly disappointed in 4th, despite destroying Shannon Rowbury’s AR of 3:56.29 with her 3:54.99. Muir took 5th in 3:55.76. Jenny Simpson ran 8th in 3:58.42, Nikki Hiltz 12th in 4:06.68.

“I’ve been working hard at 1500m this year. It looked this was easy for me but it took so much hard work,” said Hassan.

Hellen Obiri controlled the race from start to finish with the skill of a master puppeteer. The formula began simply: a steady pace at the start, leading to a 2:56.88. Eilish McColgan joined her at the front but eventually faded to 10th. After the 1600, Obiri surged for a while to thin out the pack. Through 2K in 5:52.47, her closest pursuers were Tsehay Gemechu and Konstanze Klosterhalfen. The surge lasted through 3K (8:44.37) shrinking the pack to 6 before Obiri eased up to ready herself for a kick. No one challenged her, content to let the Kenyan decide when the kicking would start, a decision some probably regret. With 500 left she went, with only Klosterhalfen, Margaret Chelimo and Gemechu in attendance. Neither could hang with Obiri on the last lap, which she burned in 58.41 to grab gold in 14:26.72. Chelimo (14:27.49) caught Klosterhalfen (14:28.43) with Gemechu 4th in 14:29.60. Karissa Schweizer in 9th ran 14:45.18 to move to No. 5 U.S. Elinor Purrier broke 15 in 11th place with her 14:58.17 PR.

“It was not easy to run a championship record without pacemakers,” said Obiri. “But I felt the energy from the crowd and stayed focused.”

Somewhat lost in all the hoo-ha surrounding the incredible men’s shot competition, the women’s TJ nonetheless featured some high-end doings as Yulimar Rojas once again threatened the event’s venerable World Record of 50-10¼ (15.50) set by Ukraine’s Inessa Kravets way back in ’95. The favored Venezuelan came in sporting the year’s leading mark, 50-6¾ (15.41), a performance second only to the WR on the all-time list.

Directly after Jamaica’s Shanieka Ricketts opened at 48-7¼ (14.81) the 23-year-old defending champ began with a solid 48-9½ (14.87), better than the PRs of most of the field. In the second round Rojas effectively put an end to it, nailing the board perfectly and stretching out to the no. 4 performance in history, 50-5¼ (15.37). In the third round Ricketts improved to 48-11½ (14.92), but that was good as she would get in taking the silver. Some excitement followed, as Rojas again went through her elaborate pre-jump routine, then landed far in the sand, in WR territory. But the red flag was quickly raised and replays showed that she was a good 3-4 inches over the plasticine. Round 4 featured another 15m jump from the leader, 15.18 (49-9¾). When sequence 5 kicked off, reigning Olympic champ Caterine Ibargüen, whose health was very much in question, sat in 6th. But the Colombian great dug deep and pulled out a 48-4 (14.73) that would hold up for bronze. Nobody else improved in the last 2 rounds. Americans Keturah Orji and Tori Franklin ended up 7th and 9th.

Jamaica captured the short relay in dominating fashion despite the loss of key leg Elaine Thompson. The foursome of Natalliah Whyte, Shelly-Ann Fraser-Pryce, Jonielle Smith and Shericka Jackson burned a world-leading 41.44. The erstwhile favorites, Germany and the United States, were both decimated by injuries and substitutions. Great Britain, with Dina Asher-Smith on second leg, took silver in 41.85. United States earned bronze in 42.10, just ahead of Switzerland (42.18) and Germany (42.48).

In recent years, U.S. men’s 4x1s have been either go big or, more often than not, go home after some disaster. This year, go big was the theme, and it delivered the U.S. its first gold in 12 years. Starting from lane 8, Christian Coleman rocketed out and his pass to Justin Gatlin was far smoother than it had been the previous day. Gatlin delivered efficiently to Michael Rodgers. With Noah Lyles on anchor, all American eyes landed on the final pass, which went nicely indeed. One could almost hear the U.S. fans let out a breath. Lyles churned the final leg, sneaking a peak near the end as if to decide whether it was safe to celebrate. That he did, hand up in a No. 1 gesture as he hit the finish in 37.10.

The time is a new American Record, topping the 37.38 marks from ’12 & ’15 that have occupied that slot since the London Olympic winning time of 37.04 was erased by Tyson Gay’s drug positive.

MEN’S JAVELIN: The big news in the spear’s qualifying round was that Germany lost half of its quartet: reigning Olympic champ Thomas Röhler (not formcharted after a summer of poor form) and Andreas Hofmann (charted as No. 3) were both far from not only the auto-Q of 275-7 (84.00) but also the eventual last qualifier, 269-10 (82.26). The good news for the Germans was that Johannes Vetter led the way with a big 293-1 (89.35) on his first attempt and that Julian Weber (276-6/84.29) was also an automatic advancer. Next in the queue was Mississippi State’s 2-time reigning NCAA champ, Grenadian Anderson Peters at 280-0 (85.34). The two Americans, Michael Shuey and Riley Dolezal, ended up in 18th and 26th.

WOMEN’S 100H: Tobi Amusan led all qualifiers with her 12.48 in the final heat. Favored Danielle Williams won the next hear in 12.51. Kendra Harrison (12.55) & Nia Ali (12.59) both got through easily. The biggest shocker, though, came in heat 2, when Olympic champion Brianna McNeal was disqualified for a false start (“I lost focus for a millisecond”). She was the only one of our picks not to advance.

There was some high drama at the end of the last round, though, as the dozen places were filled for the final. Reese was well out of it at 21-2 (6.45), but came through at 21-4¾ (6.52). That slipped her in behind teammate Sha’Keela Saunders for the 12th and final spot, but in the process, the jumper she displaced—by just a centimeter—was another teammate, Jasmine Todd. The veteran Reese, 33, now had to wait out the last 3 jumpers. The very last of them, Jamaica’s Chanice Porter, hit 21-6¾ (6.57) and a disappointed Reese was out.

Said Reese, “I just could never get my run-up going. I felt like I was not running fast… I 100% have to blame myself for that, I just did not execute the plan. It’s only my fault. I am fine. Mentally I got out there and I did not do what I was supposed to do.”? ◻︎