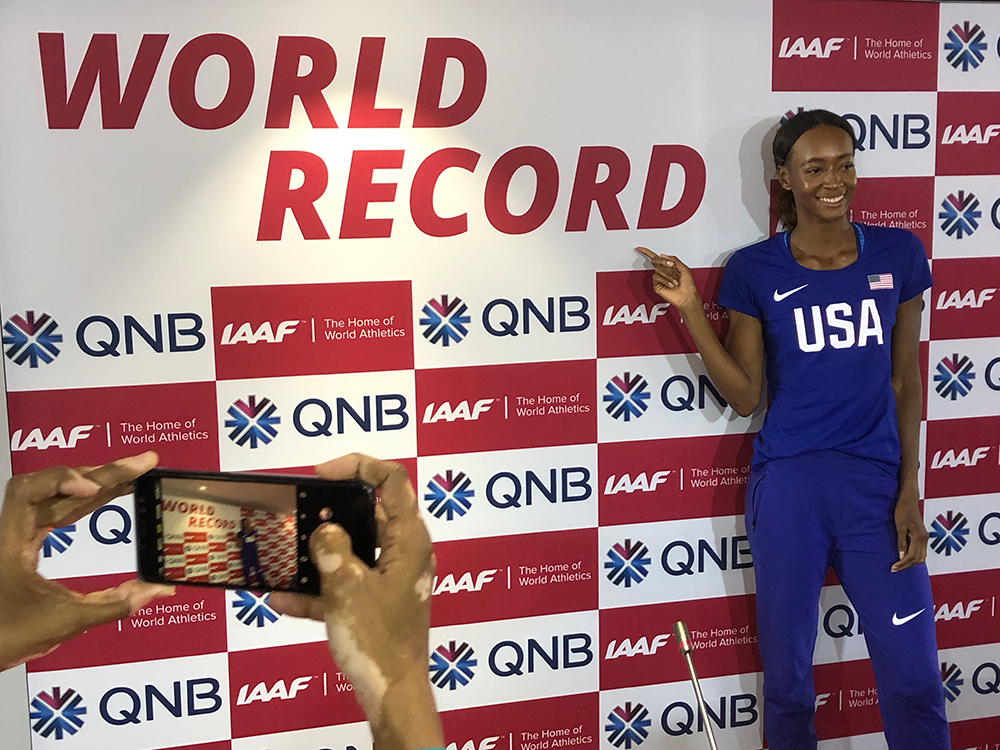 Big doings on the eighth night of the 2019 Worlds in Doha including a World Record!

Can It Get Any Better Than This?

All hail the queen! Dalilah Muhammed has cemented her claim to being one of the legends of the hurdles by producing another World Record just when she needed it most. While Sydney McLaughlin ran the finest race of her life, it was the drive and power of Muhammad that won the day in a stunning 52.16. Both Muhammad and McLaughlin got out well, and on the backstretch the Olympic champion gradually moved ahead. At the 8th hurdle, she had nearly a stride on her younger challenger. McLaughlin fought hard and made the race closer. In the closing steps it looked as if it could be decided by a lean. But Muhammad maintained her form for the win. In second, McLaughlin’s 52.23 is the No.3 performance in history. Rushell Clayton grabbed the bronze in a PR 53.74 ahead of Lea Sprunger’s Swiss record 54.06. Third American Ashley Spencer, hampered by her lane draw (2), finished 6th at 54.45.

“I just decided to go for it from the start,” said Muhammad, “and I felt Sydney coming at me around hurdle 9, then I just gave it everything I’d got. It hasn’t really sunk in yet but it feels good. I did not expect to break the World Record today, I was definitely just trying to win that race.”

Muhammad is the first since Marina Stepanova in 1986 to have set two 400H WRs in a single season.

A thrilling final kept fans on the edge of their seats till the very end, as the Ethiopians set out on a fast pace designed to burn up the competition. Taking turns with the lead, Getnet Wale and Lamecha Girma delivered the first kilo in 2:39.55, a sub-8:00 pace. They eased off only slightly in the middle of the race, Girma passing 2K in 5:22.95, a 2:43.40 kilo. That thinned the pursuing pack a bit, but with a lap left there was still a crowd. On the backstretch the 18-year-old Girma launched into a powerful sprint, at the waterjump skipping the water entirely. Still he could not shake Conseslus Kipruto and Soufiane El Bakkali of Morocco. A perfect final hurdle helped, but not enough. In the final stride Kipruto dipped past Girma to steal the gold in a world-leading 8:01.35. Girma, a mere 0.01 back, set an Ethiopian record. El Bakkali earned bronze at 8:03.76. The next 5 all broke 8:10, with top American Hilary Bor 8th in 8:09.33. Stanley Kebeni was 10th in 8:11.15. Andy Bayer ran a PR 8:12.47 in 12th.

Forget the House That Babe Ruth Built; welcome to The House That Mutaz Barshim Built. This was viewed as the hardest of all the events to formchart, with no clear favorite, what with the Qatari hero still bouncing back from foot surgery last summer. And boy, did he bounce! He cleared 7-2¼ (2.19), 7-4¼ (2.24), 7-5¼ (2.27) and 7-6½ (2.30) on first attempts. But so had the Russian pair of Mikhail Akimenko & Ilya Ivanyuk, plus surprising Cuban Luis Enrique Zayas (with a PR). Favored Maksim Nedasekau looked ragged, needing a pair of tries at each of those last 3 heights.

There were still 8 alive at 7-7¾ (2.33) where the first-up Nedasekau suddenly came to life with a solid clearance. Akimenko also went over right away, taking the lead. Barshim tried to get the crowd’s attention for his first attempt, but most were distracted by the celebration for Dalilah Muhammad’s 400H World Record. He missed, and missed again, but Nedasekau had cleared on second to move into silver position. With the partisan crowd fully behind him on his third attempt, Barshim soared over to stay alive. Moments later his bronze turned to co-bronze as Ivanyuk scored a last-ditch make.

So the quartet moved on to 7-8½ (2.35), =PR territory for Nedasekau, pure-PR territory for the Russian duo. Miss for Nedasekau, then a make for Barshim to take the lead. Briefly. Akimenko then PRed to knock him down to silver, and Ivanyuk PRed to lower him to bronze. Nedasekau promptly passed to the next setting 7-9¼ (2.37)—PR territory for the others, but a height cleared many times by Barshim. As at 7-8½ (2.35), miss for Nedasekau, magnificent make for Barshim, followed by a pair of Russian misses. The local hero was finally back in gold position, status he had no trouble maintaining as nobody else was close on the remaining attempts. Almost completely written off earlier in the year, Barshim had made a big-time comethrough in becoming the event’s first successful defender ever.

“It was just amazing,” said the winner. “Everybody was there—my family, friends, the Emir himself. They lifted me up. I was not 100% ready but when I came there and saw all those people cheering for me, even if I was dying, if they take me out with a wheelchair or with an ambulance, I would do everything I can.”

Discus With A Cuban Flair

Steven Gardiner came ready. The Bahamian, who missed much of last year with injury after promising early season runs of 19.75 & 43.87, made it clear that he is one of event’s big players. Correction: the big player. Gardiner ran even with Fred Kerley through the 200, but on the final turn where the American often turns on the jets, it was the tall Gardiner striding into a commanding lead. Once he hit 300 and it was apparent Kerley had no response, it was over. Gardiner glided smoothly to the finish in 43.48. Kerley, thoroughly thrashed, lost his momentum near the end and was passed by Colombia’s Anthony Zambrano for the silver, 44.15 to 44.17. The Pan-Am champ, Zambrano’s NR was 44.68 coming into this meet. Jamaica’s Demish Gaye took 4th in a PR 44.46, ahead of Kirani James’ 44.54.

Said Gardner, “It’s so big to win two medals for The Bahamas after the hurricane. We did it for our country.”

MEN’S 1500: Two very similarly paced semis yielded mixed results for the Americans. The first, led by Timothy Cheruiyot (3:36.53) from start to finish saw Craig Engels qualify in 4th (3:36.69) while Ben Blankenship took 6th in 3:36.98 and had to hope that would hold up for a time qualifier. Ronald Kwemoi set the pace for semi II, and was edged at the line by Marcin Lewandowski (3:36.50). Matthew Centrowitz didn’t have the kick he wanted and ended up 6th in 3:36.77. He and the next runner knocked Blankenship out of qualifying. The biggest casualty, though, was Ethiopia’s Samuel Tefera who lost contact on the last lap and dropped out on the final turn.

MEN’S 4×1: The U.S. men ran three-quarters of an A-team. Christian Coleman-Justin Gatlin-Michael Rodgers-Cravon Gillespie. Trouble is, they only had one good handoff. Coleman flew on the first leg and perhaps Gatlin misjudged his incoming speed, because that first handoff belonged in the hall of ugly. Handoff 2 was fine. Three, another atrocious transfer that raised fears of a DQ, fears that weren’t allayed in the interminable wait for results while the stadium board instead showed multiple replays of questionable U.S. handoffs. In the end, Great Britain ran a world-leading 37.56, followed by Brazil (37.70), the U.S. (38.03). In semi II, South Africa looked good in 37.65, followed by the best mass finish in history: Japan (37.78), China (37.79), France (37.88), Netherlands (37.91) and Canada (37.91). Best-ever-marks-for-places 3-4-5-6-7. Canada will be the fastest non-qualifier in history. And the U.S. will be the slowest team in the final.

WOMEN’S 4×1: Finally we know the relay order! At least for round 1, it was Dezerea Bryant, Teahna Daniels, Morolake Akinosun and Kiara Parker. In case her name was not one you guessed, Parker finished 8th in her semi at the USATF meet. She came through admirably. Only the first U.S. handoff was horrible, and the team won in 42.46, followed by Trinidad (42.75) & Switzerland (42.82) as the qualifiers while Australia crashed at exchange 2. In semi II, Jamaica dominated with a 42.11, with the other qualifiers being Great Britain (42.25), China (42.36), a German team (42.82) hampered by substitutions and weak handoffs, and Italy (42.90). Brazil (42.68) got a DQ. Can we have a second go at that formchart now? ◻︎