HERE, IN THE SIXTH chapter of a long multi-part series, is how we reported the career of Steve Prefontaine in our pages in the spring through the NCAA of ’72, with the same photographs we used at the time. Given the wealth of Pre material we generated during the Olympic year, our reportage here has been broken up into multiple parts. We have taken the liberty of doing some stylistic updatings to mirror our modern protocol and also added an editorial comment or three:

April 1972: Pre Warns Europeans With 27:22.4 6M Debut
Bakersfield, California, March 25—Phase I of Steve Prefontaine’s campaign to “make the Europeans wonder what I can do” was a smashing success, and Steve Smith’s stock rose a few more points too, as an unheralded all-comers affair at Memorial Stadium produced some of the best marks of the young outdoor season.

His last mile was the swiftest in the race, 4:22.6. “They’ll hear about this in Europe,” said Pre. “They have to be respecting me more now, and wondering if I have any weaknesses. This is going to help me in my races against them.” The time stands up well on the all-time lists, ranking as a Collegiate Record, putting him third on the all-time US list and 11th ever in the world.

Facing the weakest Twilight mile field in a few years, Pre let halfmiler Bob Martin force the pace, a 56.0 first quarter. But taking over at the 660, Pre was never challenged as he strode through the half in 1:59 and the three-quarters in 2:58.0. A solid 58.7 last go-round gave him his new PR by 0.7 and the fastest time in the nation for the year.

Pre’s campaign to impress his European rivals is now right on schedule, with a blazing 6M and now a fast mile to set him up for his 5000 campaign.

I May 1972: Of People & Things
[Editor Bert Nelson’s column]
Call me provincial if you like. Or even crazy. But I’m going on record that the US should be favored to win the 5000m at Munich. No other country has as good a chance to mine Munich metal as does ours.

But don’t ask me who will win it. I’m not that crazy. But I won’t be surprised if an American stands highest on the victory platform. For we have not one but two excellent chances.

In Steve Prefontaine and George Young, the U.S. has a great 1-2 punch. Both have the stuff of which winners are produced. But it is a wide-open event, as loaded with near-equal talent as any on the program. At this stage, there are 8 or 10 qualified candidates for the event’s highest honor.

According to World Rankers Potts & Quercetani, 9 men ranked higher last year than Pre while George didn’t make the first 10, which is as deep as the Annual Rankings go. They put the European champ, Juha Väätäinen of Finland, at the head of the list. France’s Jean Wadoux, 2nd to Väätäinen, was the No. 2 man, trailed by Dave Bedford, who had the year’s best mark at 13:22.4. Kip Keino, who probably will choose the 1500 rather than the 5000, was No. 4 and Tony Benson of Australia was No. 5. Veteran Harald Norpoth of West Germany, Dane Korica of Yugoslavia and Javier Álvarez of Spain all got the nod over Emiel Puttemans, the little Belgian who raced fantastically well at a number of distances after placing 6th in the European 5-kilo affair.

Pre doesn’t agree with his 10th-place ranking. Neither do I. He had the sixth-best time of the year—an American Record 13:30.4—and the second best 3M mark, a better-quality 12:58.6. And he was unbeaten. True, he never defeated any of those ranked ahead of him. But then they didn’t defeat him either, did they? In his three international contests, Pre whipped the Soviets, the Africans and won the Pan-Am. Anyone who saw him run had to have the feeling he was capable of faster times if pressed.

Young’s season was short but sweet. His then-national record of 13:32.2 was ninth on the year list. Earlier, he had scooted a final quarter in 54.5 for an 8:30.6 two-mile, indicative of much faster potential. But he passed up the late-season races and thus left us wondering just how good he might have been when the pace quickened. Quite possibly that’s what George had in mind.

Young doesn’t talk much about his Olympic year plans or hopes. To hear him, you can’t even be sure he’s interested in the Olympics. But 34-year-old, 3-time Olympians don’t work at it as hard as George does without the Olympics firmly in mind. And he does say he felt capable of running a World Record time of 12:50 for 3M last year.

Pre, on the other hand, is happy to talk about his running. He’s quick to let you know he is going to be tough in Munich. No doubt about it, the Oregon junior is cocky. But he has every right to be; there never has been a champion in any sport that didn’t have supreme confidence in himself. Some hide it, some express it openly. Pre, of course, is one of the latter.

I like the chances of these two for at least 3 reasons. First, their obvious talent. Second, their early-season proof of that talent. Young opened lots of eyes with his 3:59.6 mile in early March, a personal best and an indication of miling speed that few of the Europeans can match. Prefontaine took the opposite tack, proving he can cover a piece of ground by racking up a collegiate 6M record of 27:22.4 in his first attempt at the distance. Pre has a 3:56.7 mile this year and George was an Olympic marathoner, so both combine speed and stamina at 5000m, which at the higher level is such a great test of both qualities.

Third, and this is what I like most about these two little men, is they are tough. Tough-bodied and tough-minded. I don’t mean guts. Every good distance runner has plenty of those, certainly in comparison with the average man. But not all are tough enough to punish themselves as do Young and Prefontaine.

For years, it has been agreed by many that no one in this country has the drive, the concentration, the toughness to push himself as hard in training as does Young. It’s not a matter of hard training days, or months, or even years. It’s a lifetime of training that is involved, laying the foundation for championship performance. Physiologically, George may not have to punish himself so much. At his age, there is the real question of how much can one continue to improve physically. But mentally it’s a different story. The continued will to punch further and further through the pain and fatigue barrier makes George Young capable of hanging on a little further, summoning a little more at the end.

Pre has the same drive. No doubt he is more naturally gifted than Young, having achieved the same level at a much earlier age. And to those gifts he has added the same indomitable spirit. Even now his workouts at Oregon have become a legend. Time and again he will run so hard, to such a point of exhaustion, that his teammates—and Oregon runners know a little something of what it takes—have been known to break into applause.

Will either win at Munich? None can say, and surely I won’t even hazard a guess. But of some things I am sure. Both are very good. Both, if healthy, will be very hard to beat. Both are very tough, in the mold of Zátopek and Kuts and Clarke, which I admire so much. And that 5000 in Munich, next September 9, has all the earmarks of a truly classical competition.

II June 1972: NCAA 5000
Eugene, Oregon, June 03—Steve Prefontaine supposedly was unbeatable, especially in front of the rabid, Pre-loving hometowners. And he was. But not without a fight. Greg Fredericks gave it to him and in the process ran himself into high-level Olympic contention.

It was a strong collegiate field, as the mass results will testify, but Pre dominated it and with Fredericks provided the only nationally known names. And shortly after half the race had been run it boiled down to a 2-man affair. Pre had assumed command, taking the field along at a smart pace and finally pulling away from it. He went past the initial mile in 4:21.8 and the second one in 8:47.4 (4:25.6) and by then the Oregon junior and the Penn State senior were 30y ahead of the remaining contenders and pulling away.

Unable to shake his taller, slimmer rival, Pre quickened the attack, covering the third mile in 4:16.9. But it was not until there were less than two laps to go that he could edge away from the tenacious easterner. Then he steadily built a firm but not overwhelming margin as the packed stands wildly cheered the most satisfying achievement of what for them was a disappointing meet. At the bell, Steve had a 20y lead and was digging in. Still, in the final stretch drive Fredericks actually closed a bit.

The 13:31.4 time challenged Pre’s American and Collegiate Record of 13:29.8 and obliterated the meet standard of 13:57.2. Greg, too, did himself proud, his 13:34.0 ranking fourth on the all-time US list behind Pre, George Young and Gerry Lindgren. It was a third straight win for Prefontaine, equaling Lindgren’s achievement, and with another year of eligibility he has to be favored to become the first 4-time winner of any individual NCAA event. 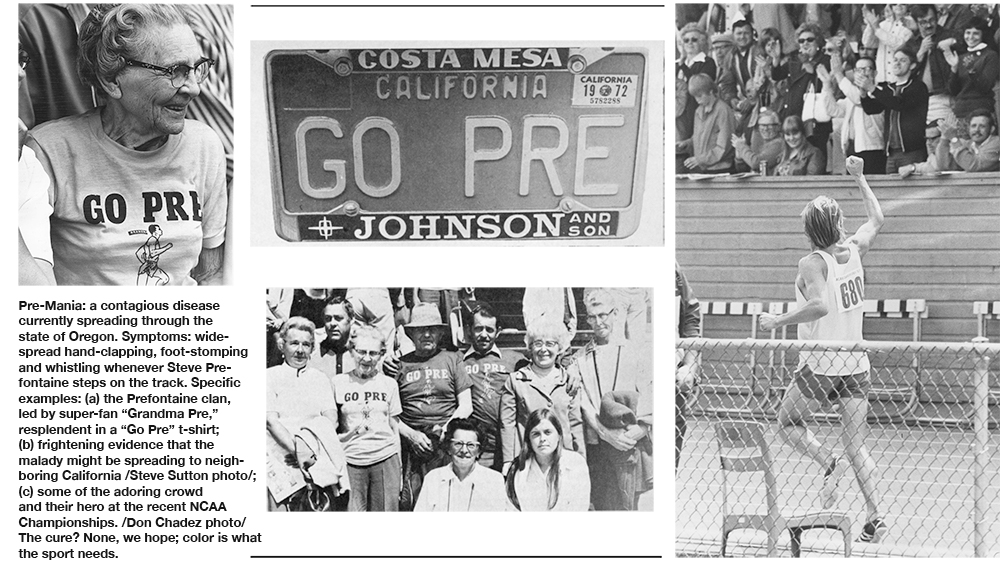 Previously in the Pre Chronicles…

Part 2: The Frosh Year At Oregon

Part 3: The Soph Year At Oregon