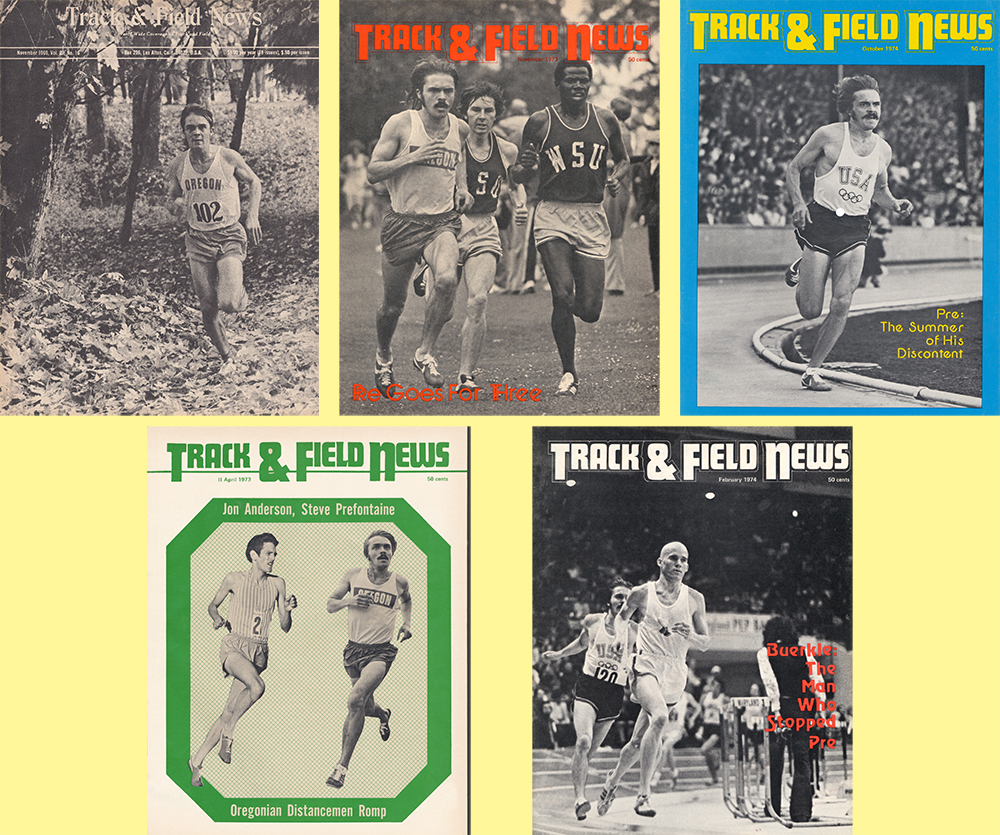 JANUARY 25, 2022 — Steve Prefontaine was born 71 years today. In case you missed it — or are just of a mind to review the legend’s distance man’s career — in 2020 we published a reprise of T&FN’s full reportage as it happened. The first of 19 installments follows and each episode concludes with a link to the next.

IN OUR I APRIL 1968 edition a new name appeared in our pages. The High School report by Fran Errota and Hugh Gardner noted Steve Prefontaine from Marshfield High in Oregon with times of 4:13.8 and 9:14.0. Humble beginnings, especially since he was misidentified as a sophomore instead of a junior.

Certainly Prefontaine had started running before this. The previous fall he won his State XC title. But this brief mention was the first time the dynamo from the small logging town of Coos Bay made the national radar. It wouldn’t be the last. In a career that went to the heights of glory and in the end, plunged track fans to the depths of grief, Prefontaine ran his heart out and spoke his mind without fear. There would never be another like him.

Here, in the first of a long multi-part series, is how we subsequently reported the career of Steve Prefontaine in our pages from 1968 through 1975, with the same photographs we used at the time. We have taken the liberty of doing some stylistic updatings to mirror our modern protocol and also added an editorial comment or two:

II April 1968: Junior Prefontaine 4:13.8
by Fran Errota
Oregon has turned out many outstanding high school distance runners and there are many track observers who think the best ever is at present a junior at Marshfield High School.

The outdoor campaign has barely begun in Oregon, and Steve Prefontaine already ranks as the fourth-fastest miler in the state’s history. Steve clocked 4:13.8 in a 5-school meet March 23 in Roseburg. The 5-9 and 142lb youngster ran quarters of 64.0, 64.5, 64.0 and 61.3 in a race in which he was supposed to run three 64s and then come home as fast as possible. “I leave it all up to my coach, Walt McClure,” said Prefontaine. “What he says, I do.”

Only three Oregonians have ever run faster, and they were all seniors who posted their fastest clockings at the end of their final season. They were Dave Deubner (North Eugene), 4:11.2 in 1962, Dan Korb (Corvallis), 4:11.4 last year, and Dyrol Burleson (Cottage Grove), former national record holder when he did 4:13.2 in 1958.

The new sensation also ran a 1:58.5 half-mile on the end of a sprint medley relay which he helped his team win. He can also run a good 2M, having done 9:42.0 last year. His best previous competitive mile was 4:29.0 a year ago, but he did run 4:17.0 in a time trial just prior to his 4:13.8. Steve failed to qualify for the State Meet in the 2M last spring, but he’s improved greatly since then. He won the Oregon A-1 cross country crown last fail and continued his training for this spring.

And Steve has set a goal. It is 4:08.0, which most fans must regard a bit conservative in view of his fast start. With so much of the season remaining, there is little doubt he will reach his goal. The feeling in many quarters is that he’ll have to set a new goal, something like 4:05.0.

Yes, Oregon may very well claim the next great high school miler. If he’s not, he should be one of the best and most certainly rate as the best to come out of Oregon and that is praise enough in itself.

I May 1969: Prefontaine Closes Record 8:41.6 With 4:16.6
Corvallis, Oregon, April 25—Steve Prefontaine, resembling his Pacific Northwest predecessors Gerry Lindgren and Rick Riley both physically and in ability, became that area’s third super-great prep 2-miler when he blasted an 8:41.6 at the Corvallis Relays. The Marshfield of Coos Bay senior had Riley’s 8:48.8 mark in his sights (“I started drilling for this race in September”) and got it with plenty to spare.

Steve started, though, at what hardly looked like record pace. His first lap took 68 seconds, and he passed the next three quarters in 66, 66 and 65. “I was afraid the first mile [4:25] was too slow,” he said later.

The fact that he’d never run 2M faster than 9:01.4 didn’t seem to cause Steve Prefontaine any concern. Way back last September, he decided he’d break the national high school record at the Corvallis Relays, and that was that. The unusually snowy Oregon winter passed, the Corvallis Relays arrived on April 25, and Steve did just what he promised himself—plus a little more.

Putting together 4:25.0 and 4:16.6 miles, he brought Rick Riley’s record all the way down from 8:48.8 to 8:41.6.
Suddenly, trackdom has on its hands another prep distance prodigy along the lines of Jim Ryun, Gerry Lindgren, Rick Riley and Marty Liquori.

Prefontaine, an 18-year-old senior at Marshfield High School in Coos Bay, rose in this one race from the class of outstanding prep to outstanding, period. Considering he’s the second fastest American at the moment—behind only Olympian Jack Bacheler—it no longer seems necessary to compare “Pre” only to preps. Among all-time boy wonders, Lindgren ran a bit faster indoors when he was 18. But outdoors, Prefontaine is king—taking the title away from the first of the precocious distance youngsters, [Canadian] Bruce Kidd, who ran 8:42.0 at 18.

Steve, who’s 5-9½ and 145lb, made other dramatic revisions in his personal bests last year. After doing 4:32.0 and 9:42.6 as a sophomore, he blossomed the next spring. “I was kind of mad that I didn’t make it to the State Meet my sophomore year,” he said, and he made up for his disappointment by winning the tough Oregon 2M as a junior plus recording bests of 4:12.4 and 9:01.4. Between then and now, he has maintained a 70-75 miles a week training schedule split into twice-daily sessions.

After a brief perch on cloud 9—just a weekend—he got back on schedule and returned to thinking ahead. “We’ve crossed one hurdle,” his coach Walt McClure said, “but there are a number of things we’d still like to do… and I don’t want him to lose his concentration.”

Even without his training and racing, Prefontaine is a busy young man. In school, he’s holding a 3.0 (B) average. And on the outside he mans a service station evenings and Sundays plus working part-time at an insurance agency and taking a twice-weekly water safety instructor’s course. No sooner had he finished his 8:41.6 than his crammed schedule took on another burden—college recruiters pleading for his services. He’s officially “undecided.” /Jerry Uhrhammer/

II June 1969: Golden West Invitational
Steve Prefontaine (Marshfield, Coos Bay, Ore), the prep 2M record holder, chose to try the mile here and won easily in 4:06.0. Prefontaine intended to go under 4:00, but he had to run by himself as he battled a stiff breeze and a field that refused to go out on a fast pace.

I July 1969: Prep Highlights
Of the several outstanding marks by preps in the past few weeks, the toppers came at the AAU meet… A brilliant finish brought Steve Prefontaine (Marshfield, Coos Bay, Ore) 4th place in the 3M with 13:43.0, making him prep history’s third-fastest.

I July 1969: AAU 3 Mile
Miami, Florida… The 3M provided a fitting climax to the running events, as Tracy Smith and Gerry Lindgren waged an interesting struggle well ahead of the pack. Times were good, even considering the suffocating humidity and heat which still lingered oppressively at the 6:00 p.m. starting time. For some reason, the sprinkler system, which lay in pieces around the track, was not used to cool the athletes as it had been planned.

The early pace was claimed by several, through a 4:31.7 mile, before Lindgren and Smith moved to the fore after 4½ laps. Mexico’s Mario Pérez fought back to separate the two for two laps before Smith picked up the pace at seven laps, reached in 7:52.0 with Lindgren a yard behind. Two Mexicans and two Canadian Olympians trailed. Prep Steve Prefontaine had moved to 7th.

Lindgren slowed the pace drastically, to 70.0, and Smith kept on little Gerry’s heeds. With a furlong to go, Lindgren held a half-yard edge on Smith, who was running directly behind. By the top of the curve, Lindgren picked it up and moved ahead by three yards coming off the curve. In the meantime, Prefontaine was making a brilliant last-lap drive.

Gerry increased the margin to 5y about 80y from the tape. Suddenly, 40y from the finish and at the finish line for the sprints, he let up—apparently because he misjudged the end though he says, “It was my fault. I faded.” Tracy, who must certainly have given up hope of winning, charged back and nipped Gerry as both were credited with the U.S.-best time of 13:18.4.

Gerry, whose problem stomach and injured Achilles tendon appeared okay for a change, said, “It sure feels great to be running well again.” Smith volunteered, “I couldn’t believe it in the stretch. I thought he had me for sure.”

Martínez, a valiant 6M runner-up who elected to stay off the pace, maintained his third position of half the race for a 13:35.6 in 3rd.

Prefontaine exploded past Pérez on the homestretch to finish as the third American. Only Lindgren and Rick Riley ran faster as preps than the Oregon high schooler’s 13:43.0, which he used to beat 3 sub-13:30 runners and Canadian Olympians Bob Finlay and Norm Trerise. /Dick Drake/

Los Angeles, California, July 19… The Soviets and Yanks split Saturday’s distance events at one apiece. In the 5000, Gerry Lindgren, Rashid Sharafyetdinov and Ivan Shopsha traded the early lead before the Soviet pair shook Lindgren. They then seesawed back and forth before Sharafyetdinov took off at the 3M mark, passed in 13:31.8. He held on for a 13:58.8 win with his teammate 2nd in 14:00 flat. Lindgren’s 14:02.2 put him 3rd as prep Steve Prefontaine acquitted himself well in light of the 90-degree temperatures and his inaugural international effort with a 14:40.0 in 5th. /Jon Hendershott/

August 1969: Americas vs. Europe 5000
Stuttgart, West Germany, July 31… In the 5000, Gerry Lindgren was to race against an assorted, East/West, German duo. But Bernd Dießner of the Eastern side failed to show up alongside Jürgen May, a former Easterner now competing for West Germany. The absentee was quoted as saying, “Such a meet calls for some prerace planning with your teammate—and I can’t even talk to May.” Even after that, few people were prepared to bet on Gerry against May, who had run a 13:33.0 recently in beating Ron Clarke. By no means awed by this reference, Gerry bravely ran “à la Lindgren,” i.e. a front race all the way.

He passed 1500m in 3:58.0, 3000m in 8:07.0. Shortly after that, Werner Girke of West Germany lost contact. But May and the surprising Steve Prefontaine seemed to be glued to Lindgren. It was only with one lap to go that Prefontaine began to drop back. An uproar from the public marked the moment in which May, 300m from home, jumped Lindgren and soon built up a lead. But Gerry fought back bravely as they went around the last curve. He collared his rival with 100m to go and proved much the stronger man in the stretch battle. With a last lap of 57.8, he clinched one of the greatest victories of his career in 13:38.4.

May’s failure to win the race was labeled a “disappointment” by most reporters, yet his time of 13:40.8 was the second-best of his career at a distance he has seldom run. He apparently lost to a man who “knew” the distance better. Prefontaine was a good 3rd in 13:52.8—fantastic running for an 18-year-old boy. /Roberto Quercetani/