FOR OUR JANUARY 2011 issue, Sieg Lindstrom interviewed Texas A&M coach Pat Henry. The all-time leader as a collegiate coach in amassing NCAA team titles indoors and outdoors with 36 crowns,  Henry guided his Aggie squads, men and women, to 5 more team wins in the decade since this interview. Among active coaches, he leads the pack for team titles in all NCAA sports and holds the No. 3 spot overall. The issues he raised in this chat remain relevant, arguably even more so, today.

With meets to report on during the current pandemic season scarce for the moment, we’ll be rebooting more content from years past. Our full T&FN Interview Archive, with most of the offerings in PDF form, may be found here.

While he’s a third-generation coach, whose grandfather Gwinn Henry sprinted to U.S. championship 100/220 doubles in 1909 and ’10, Henry doesn’t dwell on the distant past.

Asked which of his wins is most memorable, Henry says, “I think the last one is always going to be the one I’m going to remember the most. That 31st one was a great, great one and I’m probably going to remember that one until we get another, if it ever happens again.”

T&FN: Track & field is in your blood. Your grandfather was a great sprinter.

Henry: He was a football coach too. In those days track was the off-season for football. So he coached track also even when he was the head football coach at Kansas and Missouri.

Dad was involved in athletics also and was an assistant track coach [at New Mexico] at one time, then moved into administration.

T&FN: Do you remember your first meet?

Henry: Actually, I do. I was around track all my life but the first major meet I can remember was at the University of New Mexico we had a dual with USC [in ’65], and USC had that long streak of undefeated teams.

And then I can remember we had the Indoor U.S. Championships in Albuquerque, and I was the card guy. On a 176-yard banked track, I was the guy that walked around with a card and told all the officials where the next race started because nobody understood that track. I might have been 12. It was the year Richmond Flowers won the hurdles.

Tingley Coliseum seated about 10 or 12,000 people and you couldn’t get another body in there; it was completely full. (Continued below) 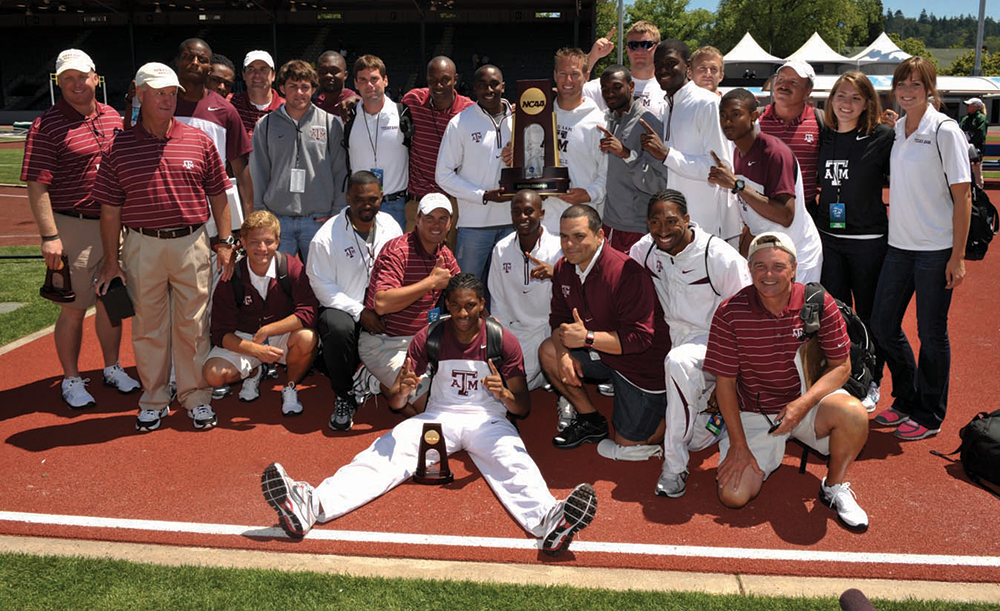 NCAA trophy celebrations have been a regular part of the Aggie drill of late. (KIRBY LEE/IMAGE OF SPORT PHOTOS) 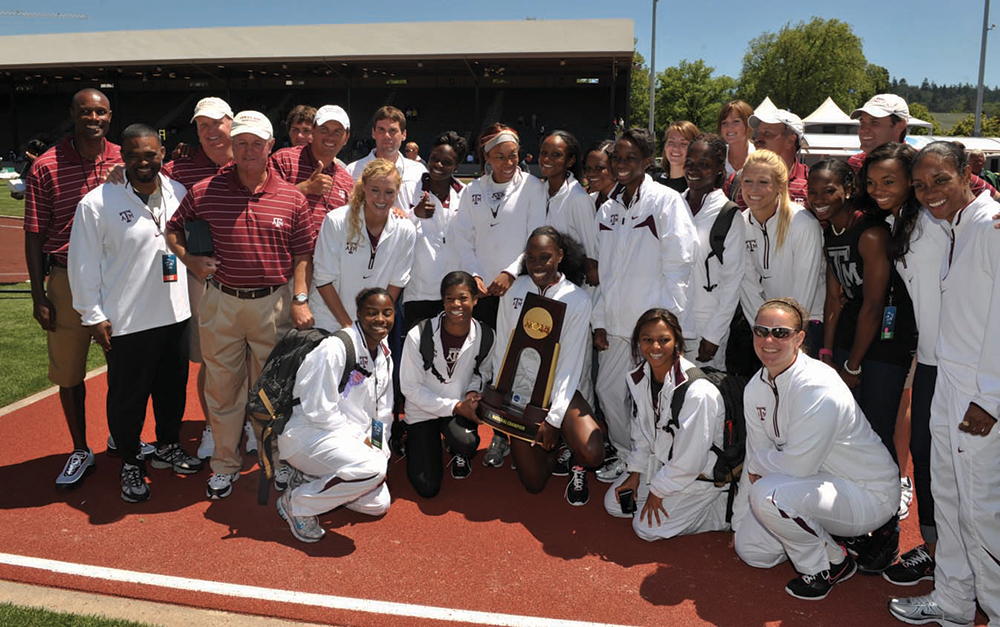 T&FN: Times have changed. We have some well-attended meets but not as many as we’d like.

Henry: While we’re talking about that, everybody knew that Richmond Flowers went to Tennessee. The association was with the university; it wasn’t necessarily with track.

T&FN: I think that’s right. At A&M you’ve been making a concerted effort to host and participate in scoring meets.

I think that’s important to the development of the individual, not just for our sport. I think it’s great for our individuals to be involved in something greater than self also and be a winner or a loser. I think that’s part of the education process.

But I think our sport has got to come back to this school trying to beat that school.

T&FN: You’ve put your program’s money where your mouth is, scheduling strong opponents in scored meets.

Henry: If you look at our schedule, we’ve got a tremendous group of institutions coming here indoors. We have got the best there is coming in here. It takes a commitment from each of those to know that every other institution’s coming here as a team. Because if you’re splitting your group up and you’re running your distance runners over here and you’re doing this over there, it’s really not a team competition. That’s a hard thing to sell [to coaches] because you qualify to the National Championships based on performance only.

If it’s done right, you’re going to get the best performances out of a team concept in the first place. If it’s the right teams people are going to run fast, jump high and throw far—because of the competition level. But if you’re limping in there with only part of your group, you may have one or two events that are awfully good but you’re not going to have what we should be doing in my opinion: having a great track meet where we really care whether there’s people sitting in the stands or not.

We’ve got to create an environment that is fan friendly so they can come in at 3:00 and go home at 6:00, and they see this team has beaten that team and they saw it all happen.

T&FN: Yes. Too many track meets are run off as marathons from the fan perspective.

Henry: Part of this issue—and I hope you understand where I’m coming from [as a coach who guides successful men’s and women’s programs]—is that gender equity at competitions has only affected the sport of track & field because competitions require that you combine men and women. No other sport requires that; none. We’re the only one that has doubled our time frame.

If there was women’s football and you had to play a women’s game at the same time as the men’s game or right thereafter and everybody had to sit there for 7 hours, they would lose it also.

I’m not for separating the sports. I think the genders should stay together as a team competition, and I think each school should have both the men’s and women’s teams competing at a meet. But I think we get too many teams together at one place and that’s the biggest problem. (Continued below)

Track Not Respected As Collegiate Sport

Pat Henry knows the numbers and has a theory about track’s unexalted position on the collegiate menu:

“We’re a sport that over the years—at the expense of the sport—our coaches don’t make very good salaries across the board. The reason that happens is because we’re not respected as a sport. We’re respected as an individual effort and that’s not the way our society is. We have to create a demand for coaches. We’ve got to create a demand for great track programs and great track meets.

“As long as we stay the way we are and don’t change, we accomplish everything the NCAA wants us to do, and cheap. We’ve got to change in order for that to change.”

T&FN: Although no one is happy with the Regionals, that’s what we’ll get for at least this second year. What format would you like to see?

I think you can create a team environment by using a descending-order list. I think if you keep track of each event, and if you take the performances, I think you can look across the board and I think you can pick out who are the great teams, who has the best teams.

I think you can decide these are the people who need to bring their teams into a national championship and we’re going to have a team performance.

T&FN: So you’re actually proposing team-based qualifying to the Nationals?

Henry: Yes, I would. I’ve been thinking about this a lot. Everybody’s been thinking about how to change it right now. I haven’t discussed that with anybody except my own staff, but the descending-order lists are a pretty good way of showing who’s doing what across the board.

Now we can look at all events and we can see which schools have people in all event areas across the board and who has a team. You may be looking at the top 25 efforts in the long jump and the 100 and across the board.

If A&M has got 12 guys or 12 ladies who are in the top 20 in their events and if that’s one of the highest numbers, maybe you decide that’s a team. They’ve got 12 great individuals; now let’s let them bring 12 of their other athletes, or whatever number we decide a team is.

T&FN: How many qualifying teams do you think would be the right number? Would you propose a first-round of regional team meets, a playoff structure of some kind, or just send a set number of teams to the championship meet?

Henry: I think it could be very simple. I think using the descending-order lists you could find the teams that are strong. You’d have a benchmark. I don’t know what it would be, whether you’re in this many events in the top 25 or that many events in the top 25, and those are your elite end. Now you bring your 6-8 high jumper and you come and you have a team competition with 12 other schools or 10 other schools, and that 6-8 high jumper may end up doing something and be a part of a team.

I just think that we’ve got to figure out a formula for doing that.

T&FN: Do you think the NCAA is even discussing new and different ideas like this one?

Henry: No. [To really move the sport forward] I think maybe a group of three or four university presidents and maybe three or four ADs would sit down and start making some decisions for our sport because I don’t think the coaches will ever agree on anything.

T&FN: Plus you have layers of NCAA bureaucracy. Proposals bounce around between committees until nobody wants what the sport ultimately gets.

Henry: Yes. And maybe track needs to have a BCS system. That sounds bad to say but maybe for the survival of the sport it’s what we need to do. Maybe we need to have 30 schools or 35 in that top group. It’s kind of like the high schools. If you’re 5A, you only care about 5A. If you’re 4A you couldn’t care less what’s happening in the other divisions. You just care about winning your division.

I think that’s true in college football right now. The lower divisions care about winning their division; they don’t care who wins the BCS. We’re saying our sport is different from that, but maybe we shouldn’t. I don’t know, but I guarantee I have more dollars to spend on track than McNeese State University does. It will never ever, ever be the same.

If you want to use that word, BCS, that makes everybody stand up and start thinking when they hear it. But maybe we need to talk about different levels in our sport. ◻︎