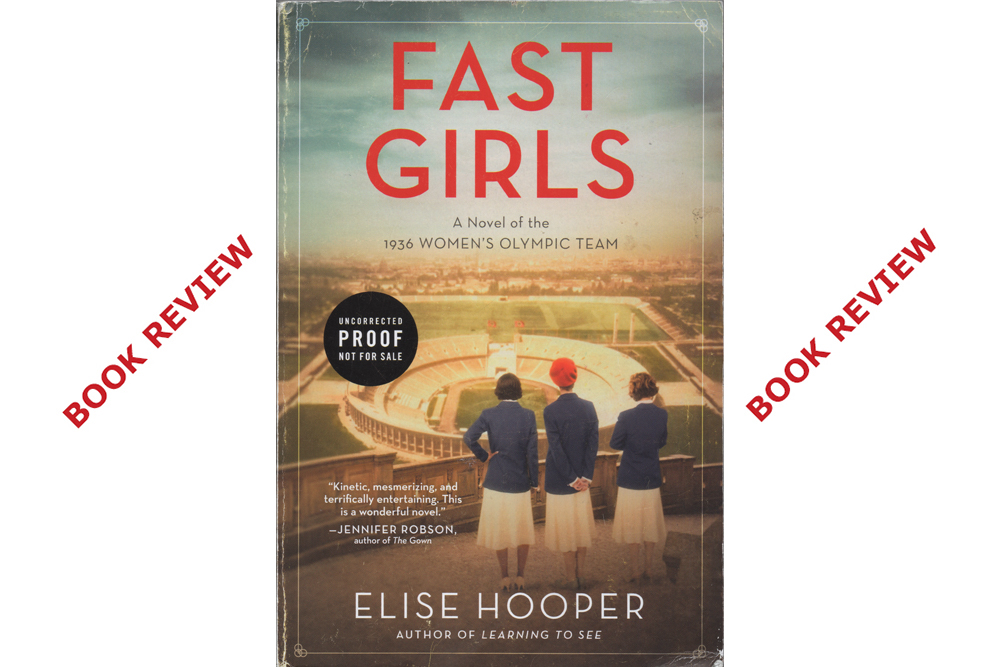 THIS SORT OF HISTORICAL FICTION is generally not my cup of tea, but I took on the assignment and ended up enjoying Fast Girls: A Novel Of The 1936 Women’s Olympic Team.

Elise Hooper is the author and what she has done is take three sprinters from the ’36 U.S. women’s team and constructed a novel around them. So, there’s fact combined with fancy, as Hooper supplements the historical record with invented possible conversations and situations to make it all flow. The three:

•Louise Stokes, an African-American from Malden, Massachusetts, made the ’32 and ’36 Olympic squads as a possible relayist, but did not get to compete at either Games. Hooper makes a strong case for racism being a factor in her being overlooked twice.

•The third runner spotlighted is the great Helen Stephens, who at 18 became the 100 gold medalist at the Nazi Olympics, defeating Stella Walsh, the defending champion. Hall-Of-Famer Stephens also anchored the U.S. 4×1 to victory, taking the baton from Robinson, who had overcome severe injuries from a horrendous accident to run well enough again to make the ’36 team. The favored WR-setting German team muffed the third handoff and failed to finish.

Things I didn’t know about Stephens—she also competed in the discus in Berlin (finishing 9th); she read Mein Kampf before going to Germany; she later owned and managed a semipro women’s basketball team. Hooper doesn’t shrink from Helen’s homosexuality, which was starting to emerge during this period.

The book inspired me to go back to the results from this Olympic period. There were two characters in the results that I needed to find out more about.

First there was the American Wilhelmina von Bremen—ever hear of her? She anchored the US 4×1 team to victory at Los Angeles in ’32. “Billie” Von Bremen was born in San Francisco, but went to school in the Midwest. She also won the bronze medal in the 100 at those Games.

There was more in the archives about the second character who piqued my interest: Fanny (Bobbie) Rosenfeld of Canada. She was a close second to Betty Robinson in ’28, but did win gold on the Canadian 4×1, which won in WR time. It turns out that Rosenfeld was the Babe Didrikson of Canada, excelling (really excelling) in hockey, basketball, softball and tennis, in addition to track & field. She was named Canada’s Woman Athlete Of The Half Century in ’49.

Sorry—those two athletes are not in the novel, but the supporting cast in the book includes Jesse Owens, Mack Robinson, Ralph Metcalfe, Avery Brundage, Didrikson (not favorably treated), Eleanor Holm, Adolf Hitler, the airship Hindenburg and many more. The book is not a masterpiece—but, as I say, I enjoyed it. But I wonder how much appeal a novel focusing on three women runners of the 30’s will have, though, even to track fans.

Fast Girls, published by William Morrow, is scheduled for release in July.