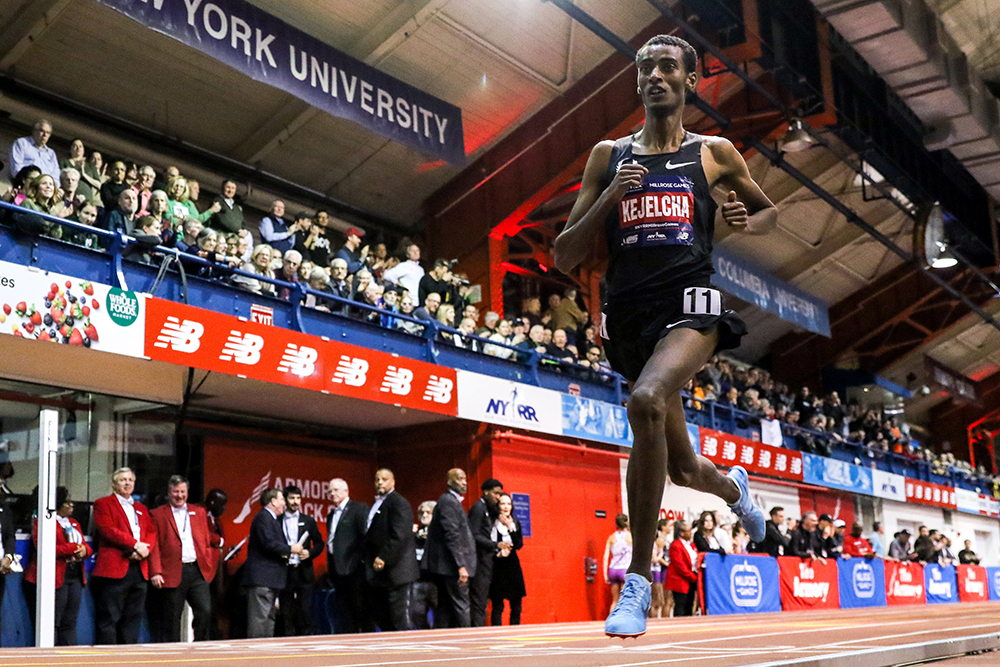 After missing a new WR in the mile but just 0.02 last weekend, can Yomif Kejelcha score in the 1500? (KEVIN MORRIS)ALTHOUGH THE THIRD WEEKEND of February will probably be relatively sleepy on the domestic front, the fireworks will be flying Saturday across the pond as the IAAF’s World Indoor Tour hits stop No. 5 of 6, Birmingham, England. Two weeks in advance of the European Indoor in Glasgow, Continental athletes should be ramping up nicely.

Kejelcha In Another Record Assault?

One of the prime attractions in Birmingham will be Yomif Kejelcha, fresh off missing the mile World Record at Millrose by the length of a lean. He’ll be chasing Hicham El Guerrouj’s 1500 WR of 3:31.18, a record that is 6 months older than he is. Also in the field will be Ethiopian Samuel Tefera, the fastest indoor Junior ever.

Last weekend at Millrose Yomif Kejelcha moved to No. 2 on the all-time indoor mile performer & performances list. En route, he passed through the 1500 point in 3:33.17, making him the =No. 6 performer ever, with the =No. 9 performance. Where will he stand after Birmingham? The top 10 marks:

On the women’s side, local favorite Laura Muir will be chasing records of her own, with her eyes set on the British mile record of 4:23.86 that Kirsty Wade set 31 years ago.

Two of the events in the Tour scoring will wrap up in Birmingham, as the men’s long jump and women’s 3000 will not be contested at the WIT finale In Dusseldorf next Wednesday. The long jump points lead is shared by Juan Miguel Echevarría and Thobias Nilsson Montler of Sweden. The leader in the 3000 is Alemaz Samuel of Ethiopia, the World Junior 1500 champ.

A week away from most of the conference championships, much of the emphasis is on grabbing last-chance marks in a schedule full of tuneup meets and all-comers affairs, with the distance medley typically loaded.

Notre Dame’s Alex Wilson Invitational usually brings together many of the nation’s top DMR foursomes, since at conferences many of those same legs will be stretched doing multiple races. According to Notre Dame head Matt Sparks, the race “will be loaded with teams that regularly qualify to the NCAA meet and we expect to see those qualifying performances again.” Oregon will be back, along with Stanford and Michigan, among others. Last year 5 men’s teams broke 9:30, the year’s only times under that barrier.

At LSU’s Twilight meet, the always notable Mondo will apparently be vaulting. Beyond that, it’s difficult to know who’s going to show up where, and what they will be aiming to achieve.

Look for a good collection of high school performances in Pocatello, as Idaho State hosts its annual Simplot Games.