all illustrations by David Bussabarger, except where noted.

The writer has often argued over the years that because each vaulter is an individual, with individual characteristics and tendencies, this should be recognized and addressed when developing his/her technique. For example, should 6’5”/185lb Chris Nilsen have used 5’9¾”/152lb Renaud Lavillenie’s technique as a model for developing his own technique? To quote Nilsen “What works best for me probably won’t work best for Mondo [Duplantis] and what works best for Mondo probably won’t work best for Lavillenie or [Sam] Kendricks. We are all completely different people and have different ways of being successful.” To reinforce this point further, here is another quote from Philippe D’Encausse, Renaud Lavillenie’s coach, when asked about the French Model vs. the Petrov Model. “There is no model. Each vaulter has an individual model based on their individual strengths and weaknesses. No athlete is the same, so you have to understand that what is good for one athlete may not be good for another.”

Following this line of thought, it is the writer’s point of view that no variation in technique seen in elite vaulters should be considered to be a flaw in execution unless it can be proven to impair the vaulter’s performance and is not just a matter of opinion. A great example here is Scott Huffman’s famous “Huffman Roll”, which is arguably the most radical approach to fiberglass vaulting ever used by an elite vaulter. Yet Huffman set an A.R. 19’-7”/5.97 in 1994 using this technique. This is an outstanding jump even today.

Another notable example is taking off underneath (the toe of the takeoff foot is ahead of the vertical plane of the top hand as the vaulter takesoff). This is considered to be a flaw in execution by the great majority of coaches and vaulters today. In Shawn Francis’s new book The Pole Vault Toolbox: There Is More Than One Way To Pole Vault, he mentions a study done by biomechanist Dr. Peter McGinnis. McGinis used a special device to measure the takeoff points of elite male vaulters at championship meets such as the Olympics and World Championships. He found only one vaulter who took off out in these competitions (the toe of the takeoff foot is behind the plane of the top hand as the vaulter takes off)—Dmitri Markov, who has a PR of 19’10¼”/6.05. All the other vaulters took off, to varying degrees, under. Note that no date was given for when these studies were made. The writer knows of at least three other 6m+ vaulters who also typically took off out—Sergey Bubka, Maxsim Tarasov and Rodion Gataullin. However, the critical point is there is a huge amount of scientific or empirical evidence that strongly suggests that taking off under is a viable variation and even the preferred means of taking off. Additional anecdotal evidence is the fact that current WR holder Mondo Duplantis (20’3¼”/6.18) typically takes off a very deep 18” under.

At present there are two major and contrasting approaches to fiberglass pole vaulting technique. Vitaly Petrov’s Model (model meaning an example to be followed) and the Tuck and Shoot Style (style meaning a way of doing something). Petrov developed his model in the early 1980’s and taught it to his star pupil Sergey Bubka, who went on to become the first man over 20’/6.10 in 1991. Many Petrov advocates claim his model is ideal and should be practiced by all vaulters. This is despite the fact that Bubka is the only elite vaulter to ever master all aspects of it, albeit inconsistently. Note that a number of elite vaulters have or do incorporate some aspect or aspects of the Petrov Model into their own individualized technique.

The fundamental principle underlying the Petrov Model is that the vaulter should emphasize active and continuous movement through the vault to maximize the available force needed to launch the vaulter up and over the bar. 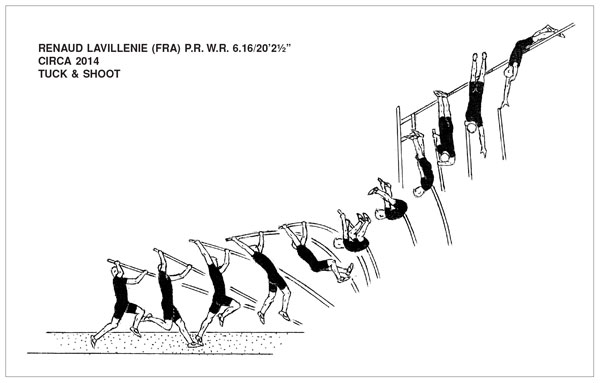 The Tuck and Shoot Style can be traced as far back as Japanese vaulter Kiydshi Niwa (PR 16’10¼”/5.15, 1968). However, it was not widely adopted until the late 1970’s to the early 1980’s by vaulters such as Wladyslaw Kozakiewicz, PR 18’-11½ WR, 1980 (Pol); Vladimir Polyakov (Rus), PR 19’¾” WR, 1981; Brad Pursley (US), PR 18’ 10 1/4” AR, 1983 and Joe Dial (US) PR 19’6½” AR, 1987. The hallmark of the Tuck and Shoot Style involves the action of the rock- back, extension and turn. That is, the vaulter typically emphasizes bringing his /her knees close to the chest with the feet upwardly oriented at the end of the rock-back. Note that there are several variations of the rock-back that achieve the same basic goal. The key objective is to attain a coiled and balanced position from which the vaulter can “time up” his/her vertical extension and turn with the recoil of the pole to take maximum advantage of the catapultic action of the vault.

Specifically, proficient Tuck and Shoot vaulters attempt to coordinate the straightening of their bodies during the extension and the turn with the final straightening of the pole (which ideally occurs halfway through the turn). Note that to achieve correct timing, most proficient Tuck and Shoot vaulters delay the beginning of the extension for a fraction of a second at the completion of the rock-back. 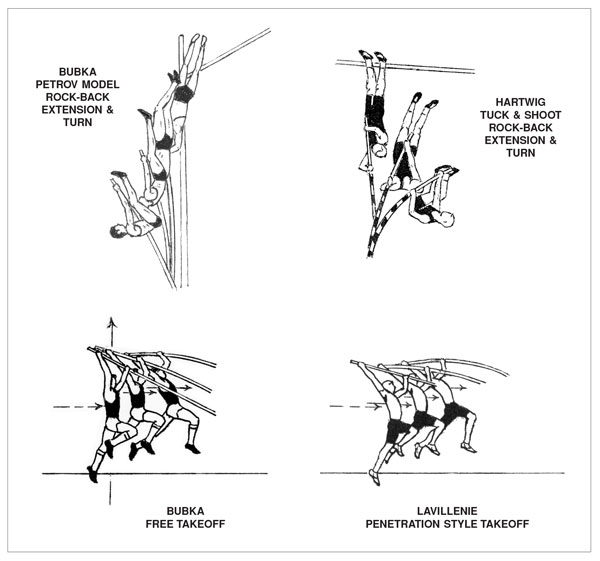 In the Petrov Model the extension should begin immediately after the completion of the rock-back. The goal of the extension is (1) to maximize the vertical elongation of the body in a vertical direction; (2) at the same time to develop maximum vertical thrust in the body as the vaulter extends. To achieve these goals Petrov says the vaulter should drop the head and shoulders back as the hips and legs are thrust upwards. In this writer’s experience this technique can easily be overemphasized, particularly dropping the head back too far. In such cases the body assumes a warped or curved shape from the legs to the head, which often impairs the execution of the following phases. It is recommended that vaulters using a Petrov type extension action not drop the head back beyond a position where the head is aligned with the spine. This helps insure the vaulter’s body will be in a straight position at the completion of the extension. 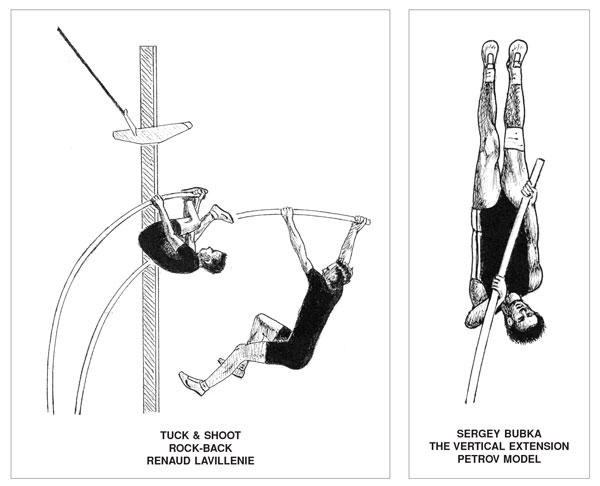 Virtually all elite Tuck and Shoot vaulters use what this writers calls a “penetration” style takeoff action. That is, the vaulter’s torso or chest leads the takeoff and moves as continuously as possible inward through the takeoff. The specific action of the lead leg, exact hand spread, the exact takeoff point and the action and positioning of the lower arm usually varies from vaulter to vaulter.

The cornerstone of the Petrov Model is the “free” takeoff. In this type of takeoff action the vaulter springs directly upward while also pushing both arms upward at the instant of takeoff. Then, as the vaulter leaves the ground, the torso or chest is pushed inward. All the other aspects of the takeoff (hand spread, lower arm action and lead leg action) are standardized in the Petrov Model (see the free takeoff illustration).

There is one obvious benefit to the free takeoff. It produces the highest possible planting position. Petrov adamantly claims the free takeoff improves pole rotation during the vault, which then promotes a higher potential hand grip. The theory that fiberglass poles rotate to vertical is based on the idea that if the bending pole’s invisible axis or chord is plotted during the vault (the line drawn from the top hand to the tip of the pole) it depicts pole rotation. However, unlike stiff poles, where the pole and its axis are one in the same, in proficient fiberglass vaulting the pole’s axis is an abstraction or a construct of the human mind that has no impact on the actual movement of the pole. Rather, in reality, the movement of the pole is primarily based on the inward force of movement of the top hand, beginning during the takeoff. Note that this action is also is the main source of the bend of the pole.

A critical disadvantage of the free takeoff is that it greatly increases the vaulter’s height from the ground during the takeoff. This, in turn, causes a significant loss of kinetic run energy (the writer knows this to be a fact based on his own vaulting experience as a fairly accomplished vaulter in his era). So, in effect, the free takeoff is inefficient. This is probably one of the main reasons so few elite vaulters have developed and used a free takeoff action over the years. 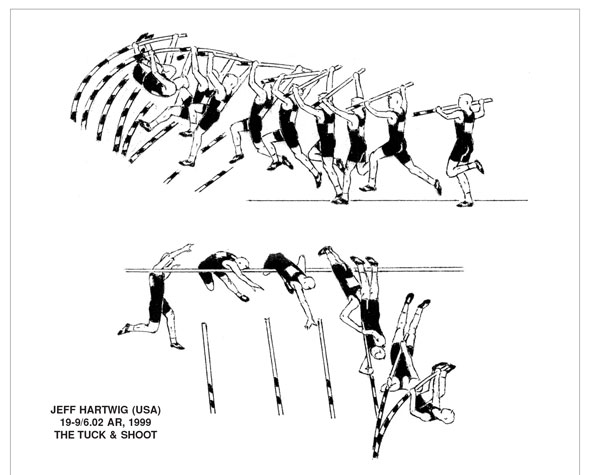 It is important to point out that Petrov advocates virtually always claim the Tuck and Shoot style is invalid, mechanically flawed or just inferior to the Petrov Model. Yet two Tuck and Shoot vaulters, Renaud Lavillenie and Mondo Duplantis, have vaulted higher than Bubka. (Note that some Petrov advocates turn reality upside down and claim that these vaulters are part of the Petrov “family”). In addition, the Tuck and Shoot Style is by far the most dominant approach to technique among male elite vaulters today.

Although this writer has criticized the Petrov Model and its advocates in many articles he has written for Track Coach over the years, he does not wish for it to disappear from the vaulting scene entirely, because it does have some good things to offer for some vaulters. (Despite his free takeoff, once off the ground, Bubka does a lot of things extremely well.) But, he does wish Petrov advocates would stop distorting reality and accept the obvious fact that from a technical point of view there are many equally valid paths to success in the fiberglass vault.

Secondly, improvements in vaulting performance has been highly dependent on improvements in technique over time. Note that in most respects, it is this writer’s view that fiberglass technique has been evolving away from rigid pole technique since bending poles were first introduced. By stubbornly clinging to the Petrov Model as the best and only way to vault, coaches and vaulters who do so are inhibiting the progress of the event, a problem that has been ongoing for some 40 years, in my judgement. Just think where we would be if the French did not follow their own ideas. Finally, again in my judgement, said vaulters and coaches are simply out of touch with what is happening in the real world of vaulting today. This is not a recipe for improving vaulting performance, rather, the opposite. 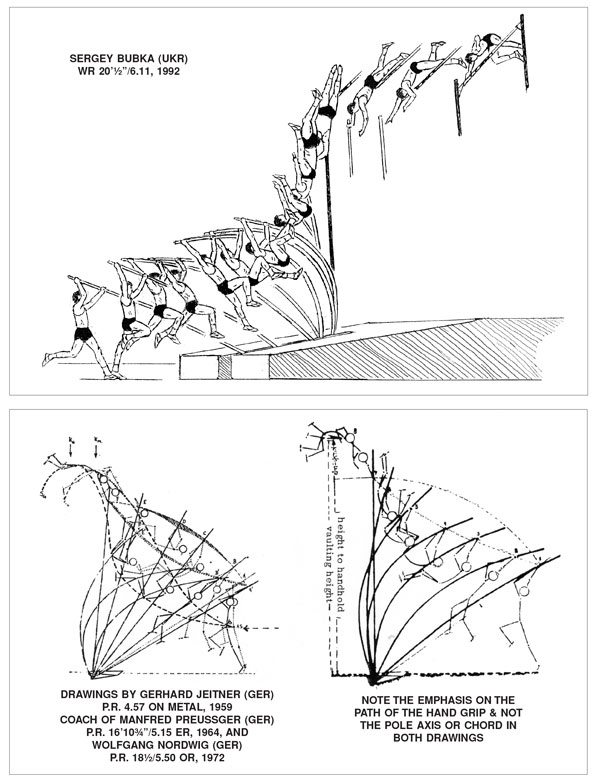