This historical journey through the early fiberglass era points out the continuing innovations in vaulting technique and form over the years.

The writer has been involved in pole vaulting for nearly 60 years, which means he has first hand experience of nearly the entire fiberglass era in pole vaulting. This gives him perspective on how fiberglass technique has evolved over time.

First Bubka was unquestionably the most gifted athlete ever to compete in the pole vault. And because he was so dominant for so long (he set 31 WRs from 1984 to 1993), a great many people came to believe his technique, which was based on his coach Vitaly Petrov’s “model”, had to be the ideal technique. A great many people still continue to believe this to this day. However, the fact that two vaulters who use markedly different technique than Bubka’s have broken his WR can be considered indisputable proof that Bubka’s technique was not neccessarily the ne plus ultra. The writer believes that Bubka achieved virtually complete psychological dominance over his competitors when he was actively competing due to the factors mentioned above. 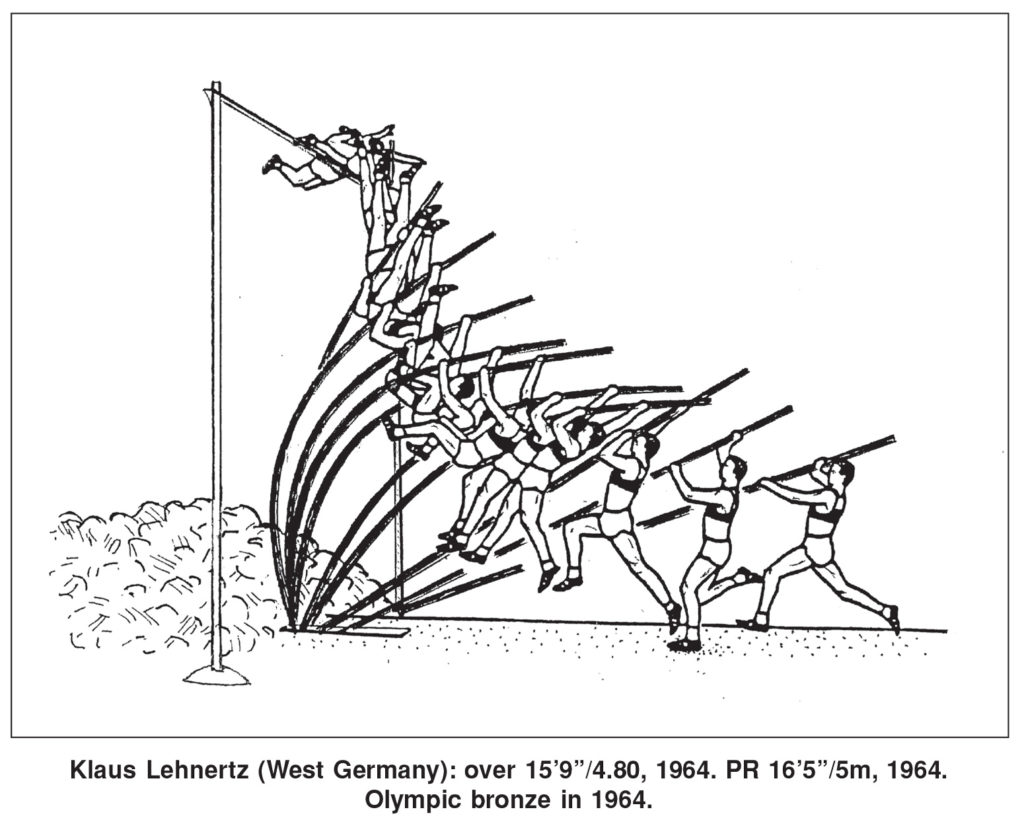 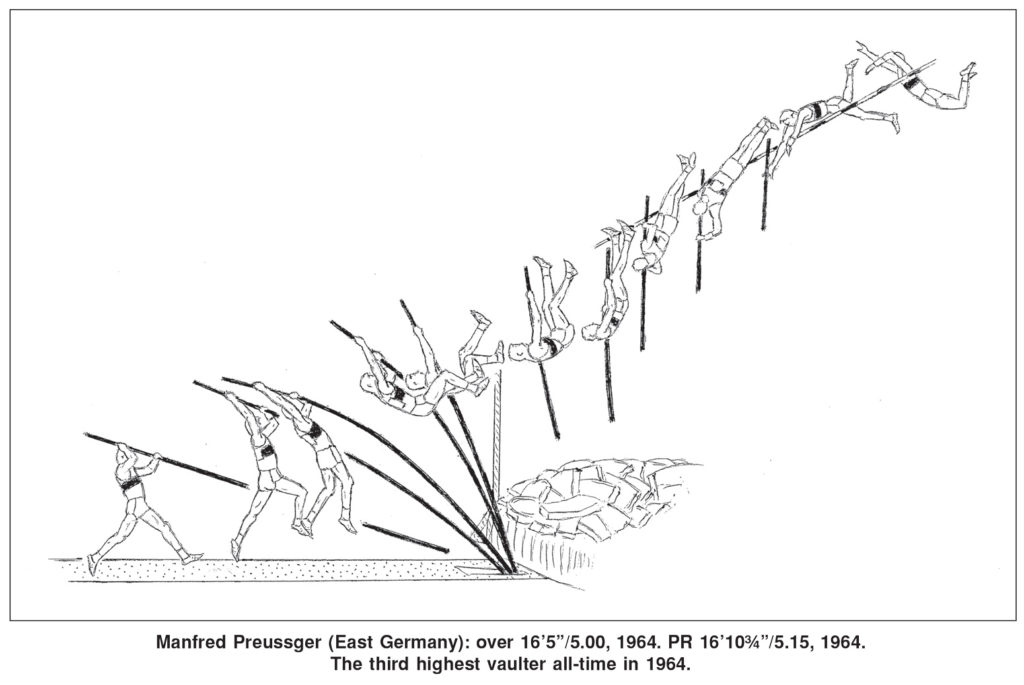 Also note that fiberglass technique did continue to evolve during Bubka’s reign, but the right man with the right technique to break Bubka’s WR did not appear on the vaulting scene until 2014—Renaud Lavillenie.

With the exception of Bubka, the best vaulters of recent years are not better athletes than early greats like John Pennel, Brian Sternberg, Fred Hansen and Bob Seagren. Today’s best vaulters simply have the advantage of many decades of technical evolution in the event and the knowledge that comes with it. 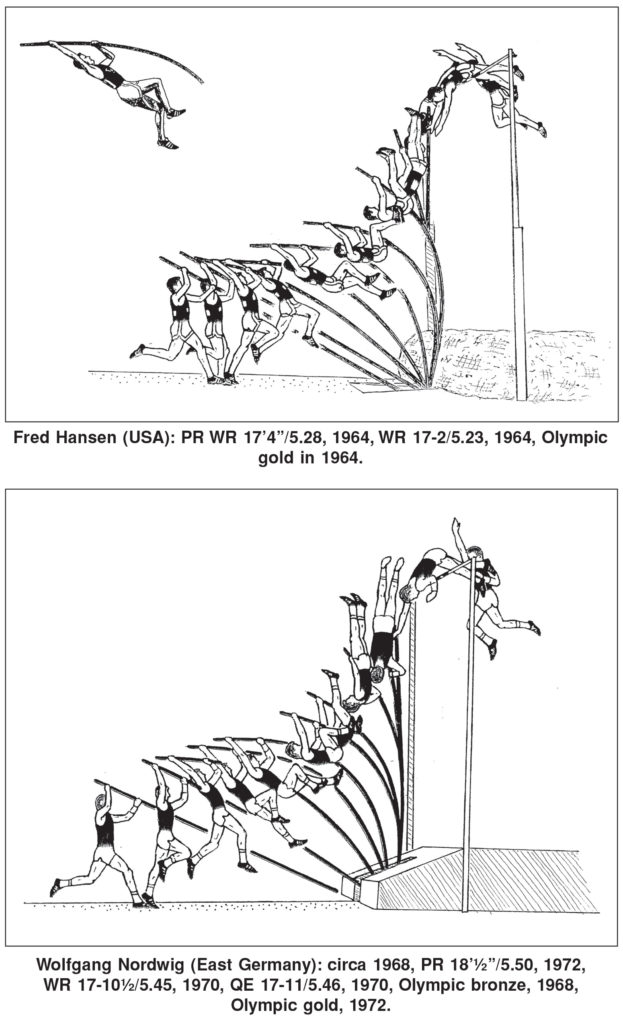 The Early Years Of The Fiberglass Era

Significant numbers of elite vaulters began switching to fiberglass poles around 1960 after Herb Jenks, working for Browning Arms, introduced his Browning Sky Pole. Jenks’s pole was more robust than earlier fiberglass poles that dated back to the 50’s which had a high breakage rate. Once it was discovered that the new poles could be bent like a spring and the recoil of the pole helped boost the vaulter up and over the bar, it became obvious that a new approach to technique would be needed.

However exactly what technical modifications should be made was initially anyone’s guess. Due to a lack of experience with the new poles, vault coaches were largely sidelined in the early years of fiberglass vaulting and the vaulters themselves led the way forward using trial and error experimentation based on educated guesses as to what would improve results.

The earliest successful modification was increasing hand spread on the pole, which improved the vaulter’s control during the vault (rigid vaulters shifted the hands close together during the plant). Typically very early fiberglass vaulters kept the hands about one foot apart.

Two other modifications that also occurred quite early in the fiberglass era involved the rock-back and vertical extension. Rigid vaulters did not fully complete the rock-back and had no vertical extension phase. In addition they began their pull at the end of their “rock-up” action. Early fiberglass vaulters found that if they fully completed their rock-back action, delayed pulling as long as possible and extended vertically after the rock-back, they could take much better advantage of the recoil of the pole.

Virtually all the best early fiberglass vaulters were accomplished rigid pole vaulters. Somewhat surprisingly, not all of them attempted to modify their original rigid pole takeoff technique when using fiberglass poles. Rigid vaulters sprang upwards as they left the ground to reduce takeoff shock and to initiate pole rotation (note that specific aspects of the run, plant and takeoff were designed to reduce takeoff shock in rigid vaulting). Then immediately after leaving the ground they pushed their chests toward the pole and dropped their lead leg (hung). This lowered the vaulter’s center of mass and initiated their swing.

The most important exception to this rule was John Pennel, who set seven WRs in 1963 and was the first man to clear 17 feet. Pennel went on to set four more indoor and outdoor WRs, culminating in a WR 17-10 ¼/ 5.44 in 1969. Typically rigid vaulters took off “out” or behind the vertical plane of the toe of the takeoff foot. Pennel moved his takeoff point well forward and “ran under the pole” as he took off. He also drove his lead leg in a forward-to-upward direction throughout his takeoff (he elimated the traditional “hang” action seen in rigid vaulters). By combining his lead leg action with a strong forward driving action Pennel lowered his takeoff angle to about 18 degrees. The combination of these changes produced much more force of movement in his body during takeoff, which facilitated a higher hand grip and increased the maximum bend in the pole. Finally, Pennel increased his hand spread to about 2’ 1/2”, by far the widest hand spread of any elite vaulter at this time. 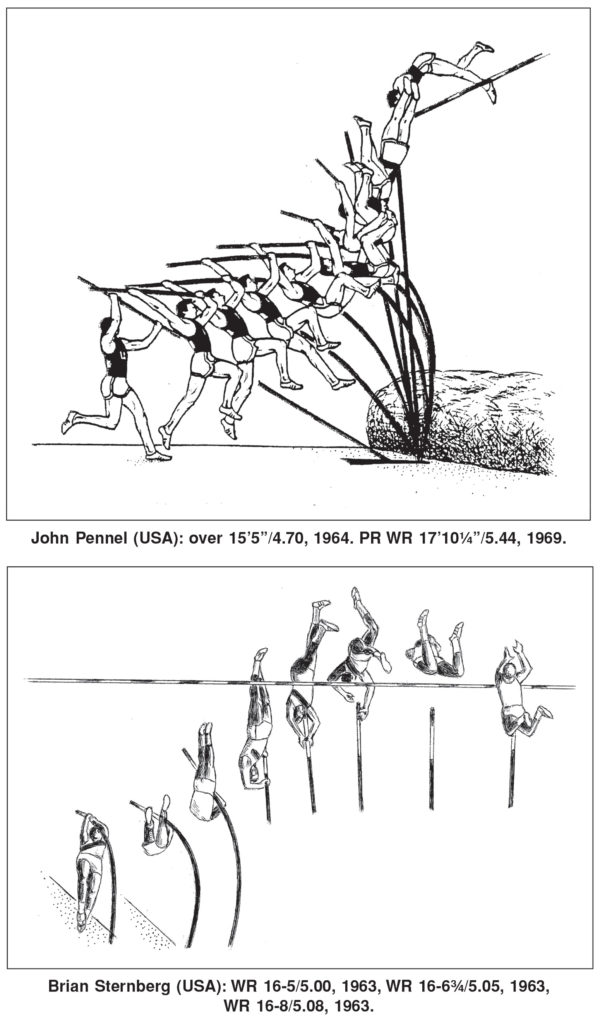 The single most important technical modification Pennel developed was his low takeoff angle based on driving in a forward and slightly upward direction through the takeoff action. Over time this technique was adopted and improved on by nearly all elite fiberglass vaulters (The “penetration” action of today’s elite male vaulters has become much more pronounced since Pennel’s day). 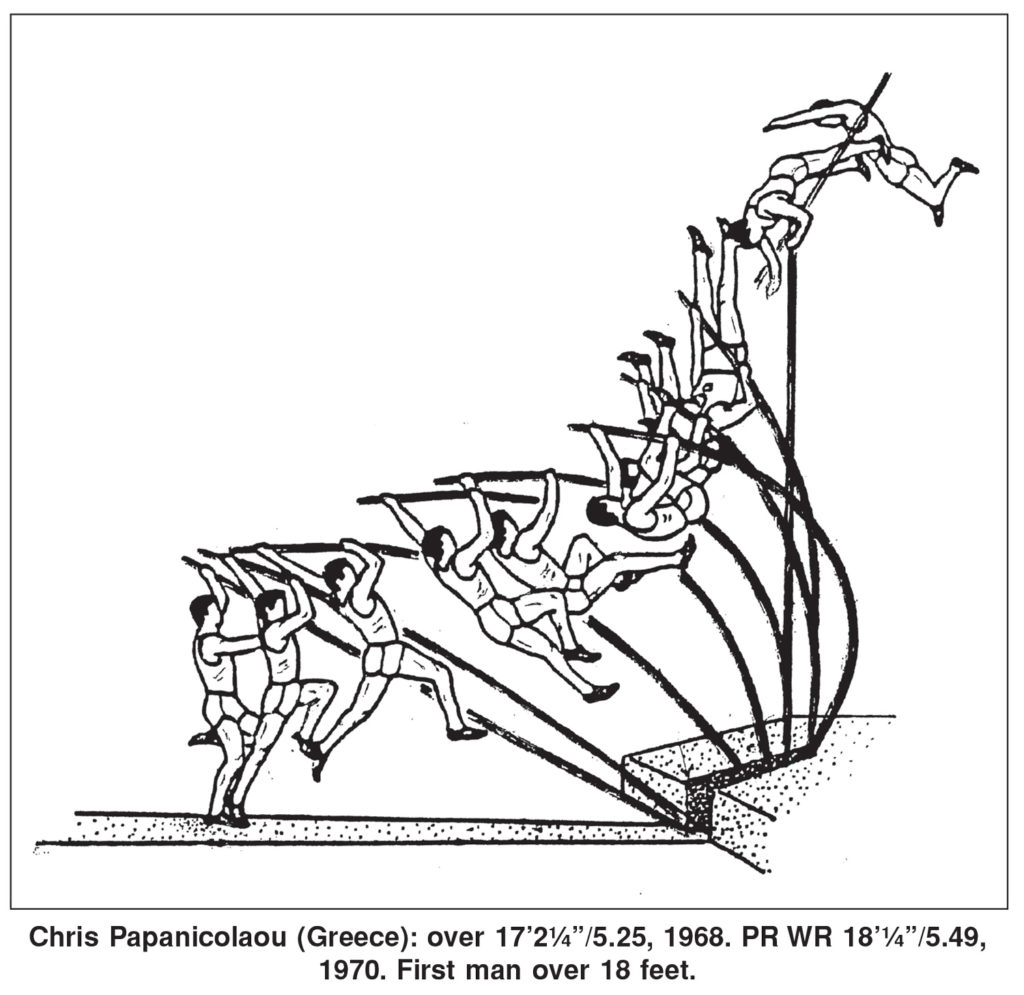 The Continuing Evolution Of Fiberglass Technique

Over the years individual vaulting styles among elite vaulters have proliferated and new modifications in virtually every phase of the vault have been developed.

Some of the most notable variations in execution not previously mentioned are ….

(1) Rigid vaulters typically “glided” into the takeoff to reduce take-off shock. Note that one critical advantage of fiberglass poles is that the bending of the pole absorbs most of the takeoff shock, which allowed several new modifications in technique to be developed. Relatively early on, fiberglass vaulters started emphasizing the development of maximum speed and drive on the final strides of the run and into the takeoff. This facilitated bending the pole and promoted higher hand grips. In addition, by the late 60’s vaulters discovered that using “overweight” poles improved performance. Therefore emphasizing maximum speed and drive into the takeoff became even more critical in order to bend stiffer poles. 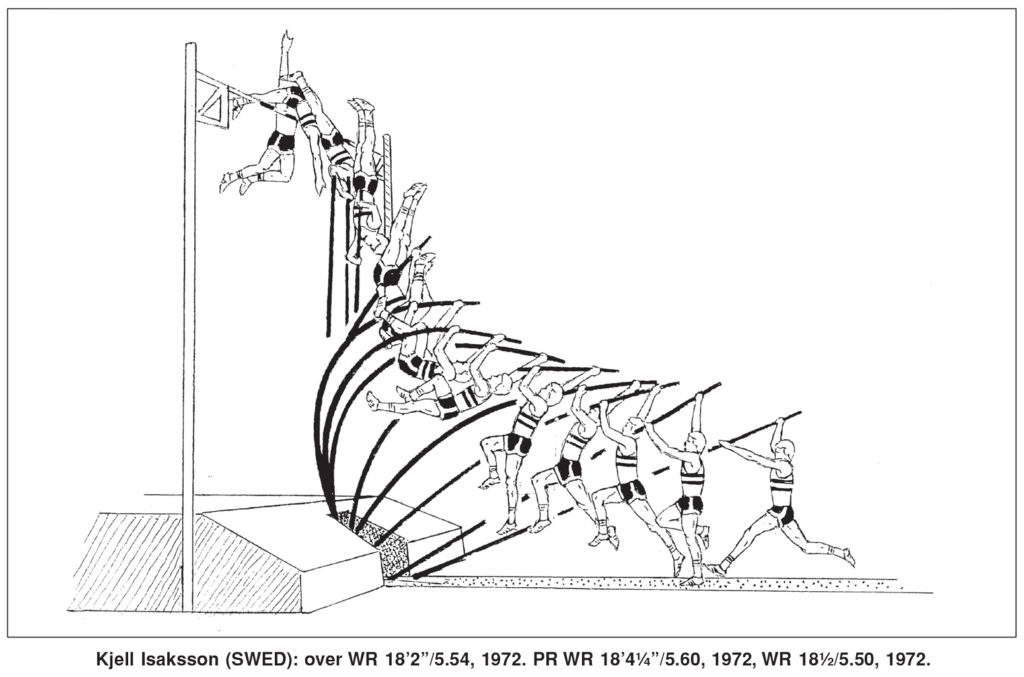 (3) Rigid vaulters used a side arm planting action. That is they continuously advanced the pole forward as they slide the bottom hand upwards towards the top hand. At the completion of the plant their hands were together and in a position slightly in front of and above of the vaulter’s head. The rigid pole plant allowed the vaulter to absorb much of the takeoff shock in his arms. Virtually all early fiberglass vaulters used a modified version of the rigid pole plant. In the mid 1960’s Bob Seagren was the first vaulter to develop a modern curl/press planting action, finishing his plant with the top hand as high as possible overhead. This technique increased the angle of the pole, which improved the vaulter’s ability to maximize his/her hand grip.

(4) Other variations in the action and position of the lead leg have been developed in addition to Pennel’s introduction of his new lead leg action (such as keeping the lead leg in a folded position throughout the takeoff or extending the lead leg outward like a hurdler, just after leaving the ground). Some vaulters have also achieved excellent results using an updated version of the rigid pole takeoff by increasing the forward driving action during the takeoff.

(5) In the early 70’s Tom Blair was the first vaulter to achieve world class heights using a “stiff arming” action with the lower arm during the takeoff and swing. This technique enhanced the vaulter’s ability to bend stiffer poles as well as helping to control centrifugal force developed during the swing.

Over time this technique was widely adopted by many elite vaulters. Note that extending the lower arm only during the swing dates back to Pennel.

(6) Extending both legs downward during the swing has recently become popular with several of the best vaulters in the world.

This action keeps the vaulter’s center of gravity as low as possible during the swing, which helps conserve forward momentum. On the downside it also creates more drag during the swing. 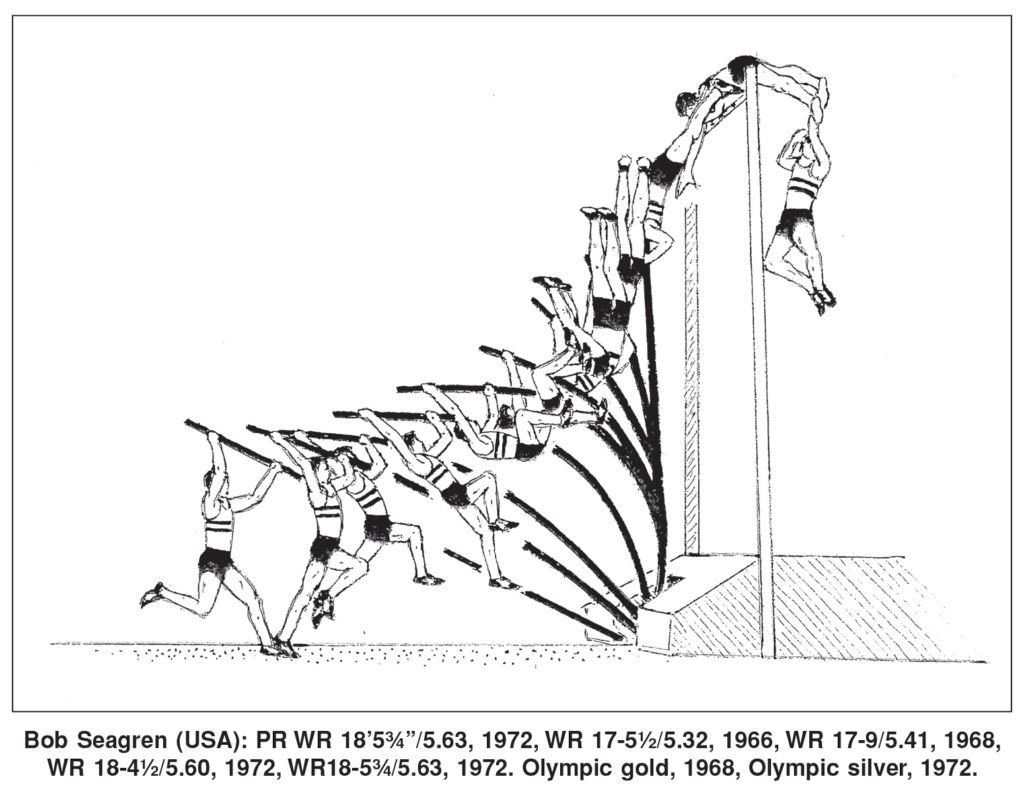 (7) Lastly, new variations in the positioning and action of the rock-back have also been developed fairly recently to allow the vaulter to better take advantage of the recoiling pole (“tuck and shoot action”).

In conclusion, given the great number of stylistic variations that have proven to be highly effective (and the definite possibility of the invention of new variations not yet seen), there is nearly an endless number of ways that elements can be combined to make up an an individual vaulting style. Therefore it is logical to assume that fiberglass vaulting technique can continue evolving and improving for many years to come. To quote Leonardo Da Vinci, “Never be limited by whatever has been done before.”