Just how fast are the fastest sprinters? John Shepherd looks at IAAF stats from the world indoors. Adapted with permission from Athletics Weekly, March 28, 2019.

At last year’s World Indoor Championships in Birmingham the IAAF followed up its biomechanics analyses from the 2017 World Championships in London with further event by event reports. Here we take a look at the one produced for the 60m which was won by Christian Coleman in 6.37.

Coleman’s time was set just a couple of weeks after he broke the world 60m record by five hundredths of a second and it took down the 20-year-old championship record. The data was produced by Carnegie School of Sport, Leeds Beckett University and the IAAF. You can download all event reports from the 2018 World Indoor Championships and the 2017 World Championships by going to the IAAF website.

How was the data collected?

Five vantage points were used and data collected via 11 high-speed cameras, very considered measurements and control points were used to get detailed data on the start, and acceleration. The video files were then imported into SIMI Motion (Simi Reality Motion Systems) and manually digitized. The sprinters’ key body parts were then analyzed in incredible depth and detail. Table 1 shows some of the key variables considered by the research. Temporal aspects such as the time it took to leave the blocks and those of the initial clearance steps were also evaluated.

If you are a sprint coach in terms of block clearance and initial acceleration, you will probably focus on the angle at which the sprinters leave

the blocks, the drive that they create against the blocks and that during the first steps of acceleration.

Key aspects or cues to focus on would be torso angle, shin angle and hip extension (drive through the hip). Unless you have access to the type of kit used by the IAAF you will not, somewhat obviously, be able to obtain joint angular velocities nor the percentages of time spent across the various phases of block clearance.

When the sprinter leaves the blocks from the set position, he should push with both feet through the block pedals. The IAAF considered the time for these push phases, plus reaction time. Coleman was the quickest to exit from the blocks—he had a total “push time” of 0.290, which when his reaction time was added totalled 0.441. His single leg push time was 0.127 and his double leg push time 0.163 (see Table 1 for definitions).

This indicates that Coleman is clearly a fast starter and can react very quickly and exert a lot of force in a short time. However, how did that translate to block clearance distance?

Sprint coaches stress to their athletes the importance of getting distance on that first step (and the initial ones that make up the acceleration phase). If the step is too short then the race can be lost, as it can be if it is too long which results in a lack of distance from the block and unwanted braking respectively).

In the World Indoor 60m final Coleman was third after Step 1. Ronnie Baker and Sean Safo-Antwi were equal first in terms of touchdown on first contact after the start. Turkey’s Emre Zafer Barnes achieved the greatest distance, covering 0.66m, Coleman 0.51m and Baker 0.62m. Coleman spent slightly more time airborne than the leaders—perhaps his block clearance projection angle could have been better?

Speaking of which, the IAAF stats have angles for numerous body parts in numerous positions at the start and just after. Let’s initially consider trunk angle. In the set position Coleman was inclined at minus 18.3 degrees, Su Bingtian minus 13.4 with Barnes the shallowest at minus 22.8.

What of knee joint angles?

Most sprint coaches will instruct a circa 90-degree angle at the knee joint of the front leg and one of around 120 degrees at the rear leg’s knee in the blocks. 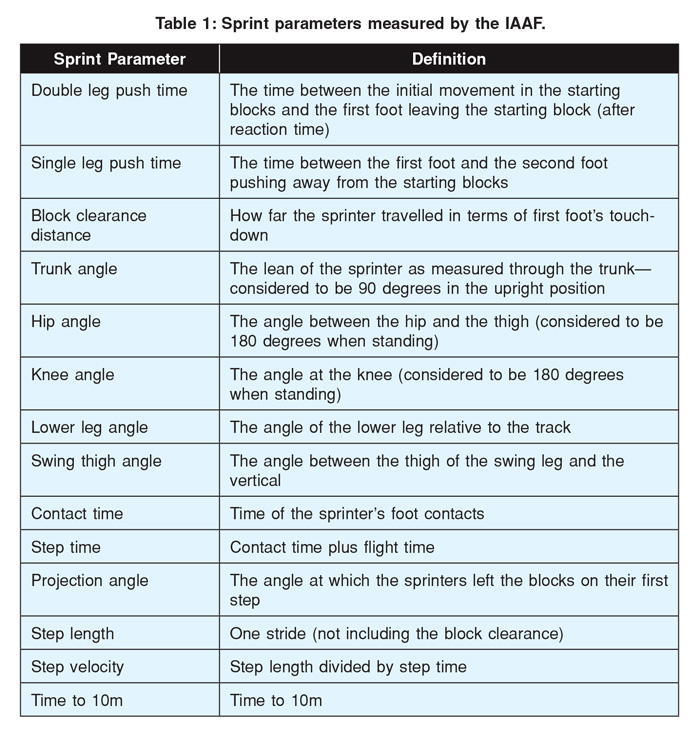 A common coaching point made by sprint coaches is that the sprinter should stay low as he drives from the blocks.

A forward angle should be set across the body (and not just achieved by bending at the waist). At block exit Coleman had lifted his trunk to 40.2 degrees. All other finalists were between 31.8 degrees and 41.5 degrees. (Note: this position as recorded by the IAAF featured an incomplete extension of the rear block leg, as it was measured at the immediate point when neither foot was on the block pedals).

So in terms of this IAAF measurement, the greatest degree of hip extension during this phase was shown by Safo-Antwi (176.5 degrees) whilst Coleman had the third “straightest” extension with 172.7 degrees.

Another key coaching clue for the start and the initial steps revolves around a negative shin angle (the shin should be behind the knee). This keeps the sprinter’s propulsive forces behind him. Interestingly Coleman’s first contact involved a near to 0-degree shin angle. Such an angle can absorb forward propulsion and “bounce” the athlete upward, thus reducing accelerative propulsion. 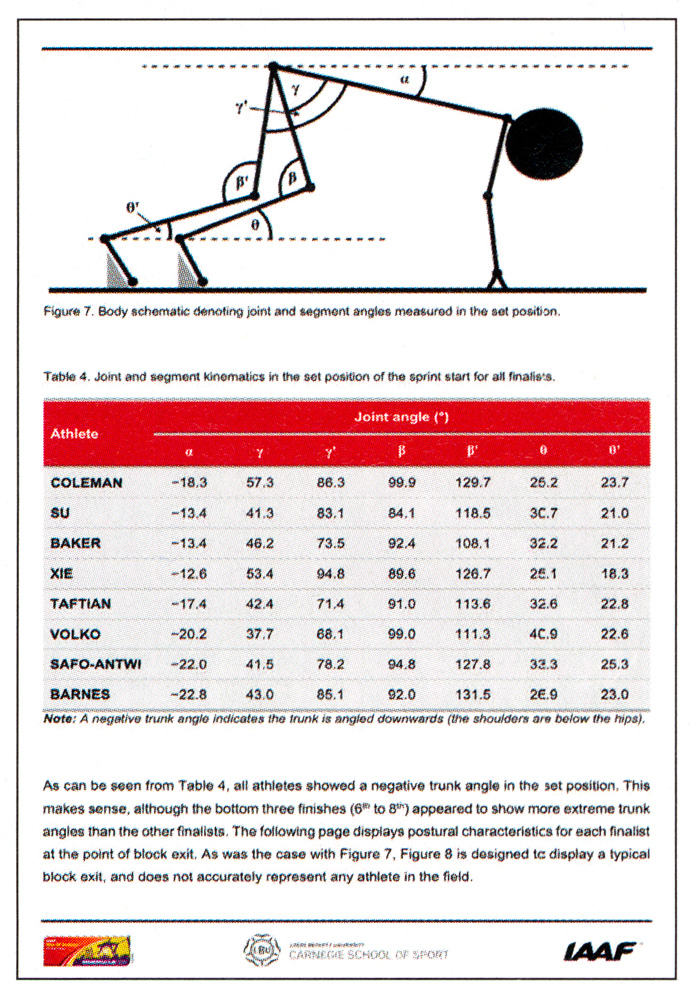 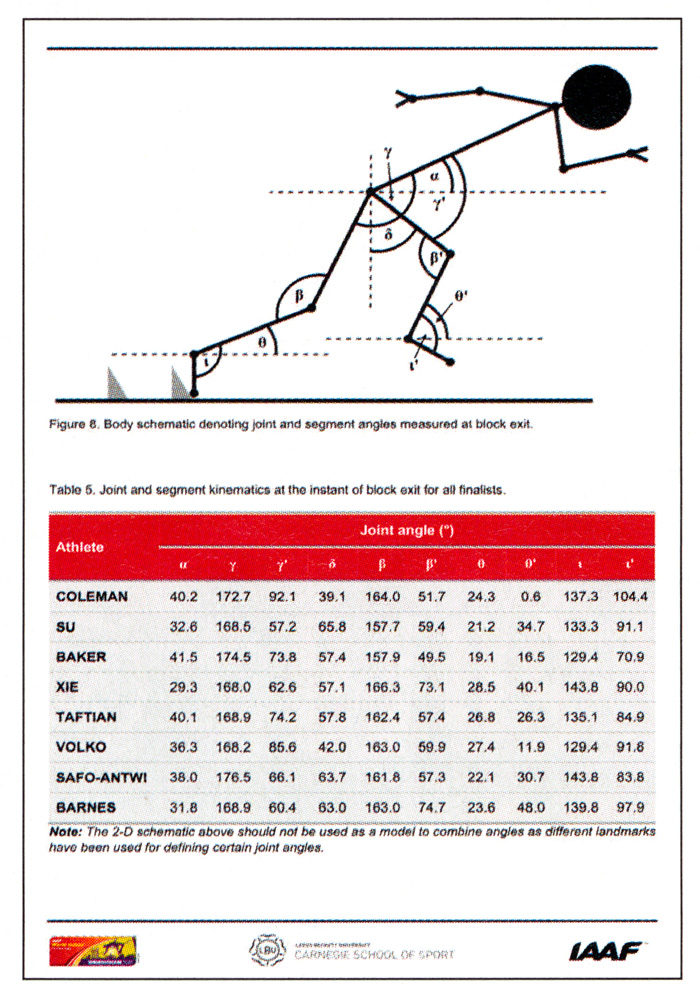 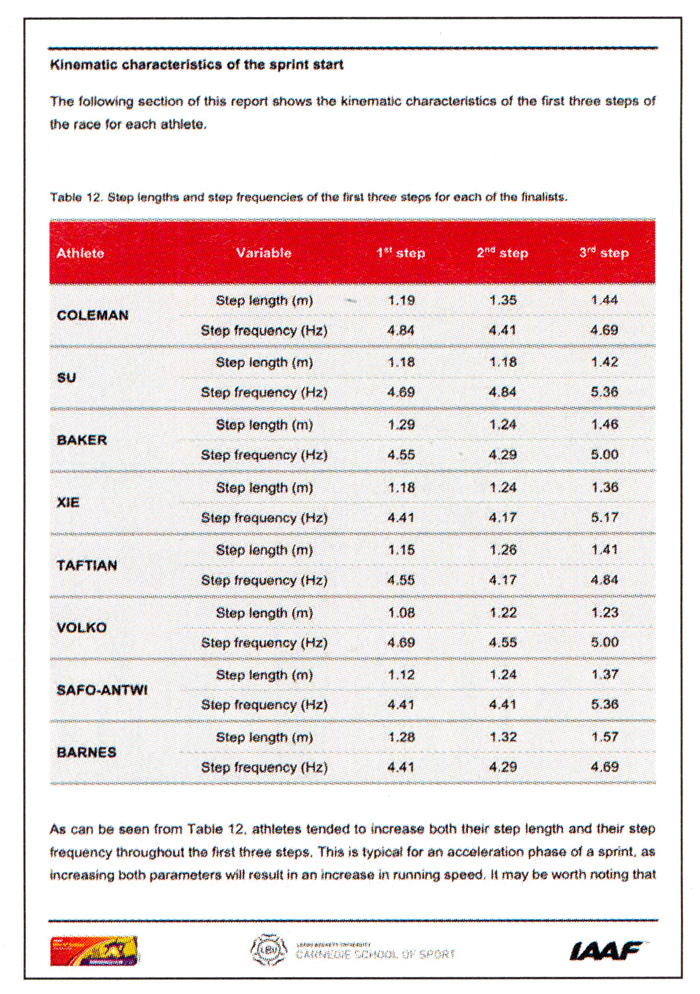 So, we have considered some of the key biomechanical elements of the male Birmingham World Championship 60m finalists (many of which chime with what everyday sprint coaches work to); let’s now consider in brief how fast the likes of Coleman are able to move.

Excluding—although obviously crucial as a determining factor technique—sprint velocity is determined by cadence, time on the ground on foot-strike, flight time and the amount of force that can be generated. In any sprint, the first step contacts will be slower, as will be the step frequency, as the sprinter builds momentum.

Coleman’s first step after block clearance was 1.19m long and his second and third 1.35m and 1.44m respectively (recall the IAAF defined the first step as the one that took place after block clearance). His step frequency was 4.84Hz, 4.41 Hz and 4.69Hz at the same steps. Most elite male sprinters will only slightly increase this step frequency over the course of the race—this shows how fast elite sprinters are from the gun.

In terms of trunk angle Coleman’s was 41.6 degrees on the third step while Baker displayed the highest angle of 56.3 degrees. In the first three steps from block clearance Coleman lifted his trunk by 1.4 degrees. This will give sprint coaches an idea as to what’s required to sustain an optimum acceleration.

The lAAF’s willingness to share their biomechanical data must be applauded. For everyday sprint coaches the data can be illuminating. However, you will need to be able to see through that which could be superfluous for your coaching. Unless you have such a high-tech biomechanical set-up then you will somewhat obviously not be able to measure the same parameters as the IAAF did and get such a blueprint on your athletes.

Nevertheless, the data confirms many of the everyday sprint coaching cues and techniques that sprint coaches up and down the country will be using. And the data relating to trunk angles and length of the first three steps and time to 10m will provide some markers for those wanting to chase after Christian Coleman!