The title of this article says it all: Babbitt and Saatara have crunched the numbers and show at what age male throwers reach peak performance.

A statistical analysis was performed on data taken from 23 or 24 of the top performers of all-time in the men’s throwing events. The purpose was to generate an age-based table of performance norms for the all-time best throwers in each throwing event, and compare and contrast the developmental rates of the four throwing disciplines as they pertain to reaching top performance. Age-based norms were created by calculating the average best mark of the top athletes for each year between18 to 30 years of age. The rate of development as it pertains to biological age was calculated for each throwing discipline by creating a chart which plots the percentage of a given group’s maximum performance for that year relative to their best all-time performance. Results suggest that the javelin was the fastest developing event to best performance, while the hammer and discus throws displayed the slowest rates of development.

This statistical study was influenced by the work of Pavel Tilinger, Karel Kovar, and Petra Hlavata in their study on the dynamic progress of performances of prominent world-class athletes in selected track and field events from 20051. While the Tilinger, et al study examined data from a variety of running and field events, the scope of this project was focused exclusively on the men’s throwing events with the subject groups consisting of 23 or 24 of the all-time performers in each of the four throwing disciplines (shot put, discus, javelin, and hammer). The members of these elite subject groups have shown to be the predominant medal winners at the sport’s highest levels (Olympic Games and World Championships). The purpose of the study was to inspect the performance data in a way to give an idea of what to expect when striving for elite performance:

1. Calculate the average age of top performance for each of the four throwing disciplines.

2. Generate an age-based table of performance norms for the all-time best throwers in each throwing event.

3. Compare and contrast the developmental rates of the four throwing disciplines as they pertain to reaching top performance. 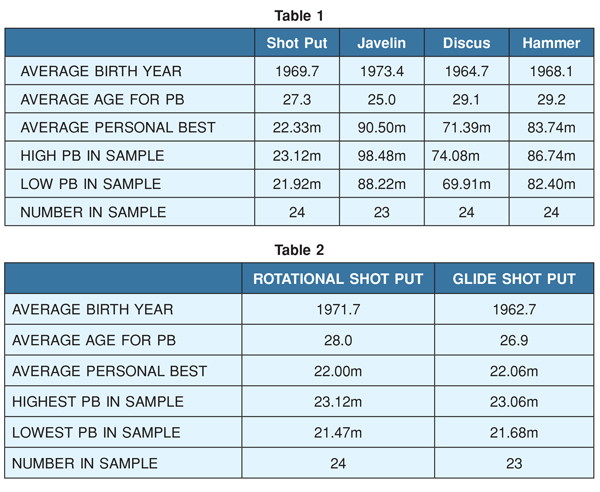 Outline of the Group Data

Preliminary calculations were made to find the average age for achievement of personal best and average birth year for each throwing group. The overall results showed that the top throwers realized their best marks in their mid- to late twenties. A more detailed examination of Table 1 reveals that the discus and hammer groups were roughly 10% older than the shot put and hammer groups when it came to the average age that the athletes produced their personal bests.

A further stratification of data was also done for the shot put as there are two distinct techniques used to throw the implement. Table 2 highlights these calculations, and as one can see, the figures are fairly equal except for the average birth year of the top throwers. The javelin, as expected, had the youngest group of top performers due to the fact that the new rule javelin changes were implemented in 1986. It is interesting to note there is a nine-year difference between the top practitioners of the rotational technique (1971.7) versus the glide technique (1962.7). When the glider group’s average birth year was adjusted so that it was equivalent to the top rotational throwers, the performance levels adjusted down significantly (Chart 1). This suggests that the very elite gliders were much more prevalent in the past and are not as common in recent years. This idea can be supported by the fact that the finalists in the Olympic Games/World Championships have transformed from an 11/1 glider to rotational ratio in 1983, to between a 2/10 to 4/8 glide to rotational thrower ratio in the more recent major championships (Chart 2). 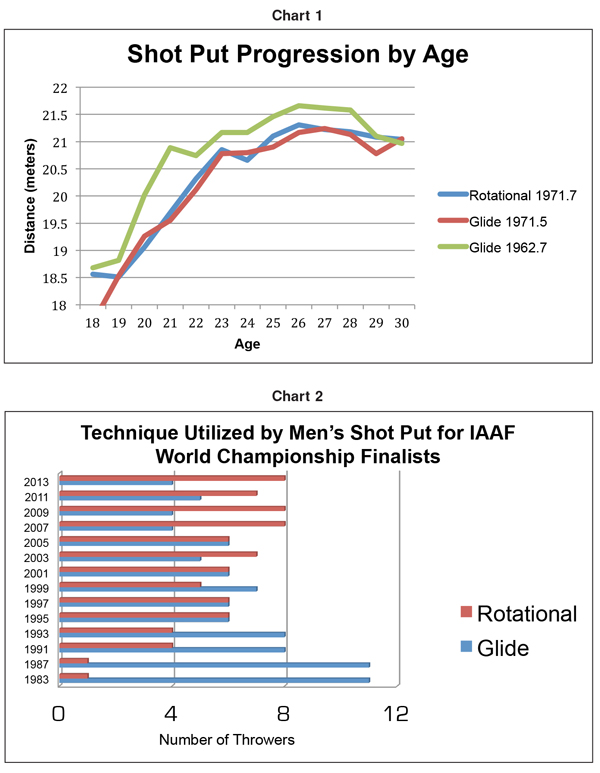 Table 3 shows the average best for each elite throwing group of the four throwing disciplines at a given age. This simple calculation was done averaging the best performances by the members of each group for every age between 18 to 30 years of age. From these numbers, one can have a general idea of what developmental markers a potential medalist would need to reach in a particular event at a given age.

The rate of development as it pertains to biological age was calculated for each throwing discipline by creating a chart which plots the percentage of a given group’s maximum performance for that year. Table 4 illustrates an example of how this data was formatted for the javelin throw. Chart 3 shows that the shot put group was found to be the one that reached the highest maximum performance level at the youngest age (26 years of age). The javelin group followed at 27 years of age, and the hammer and discus groups at an average age of 28. 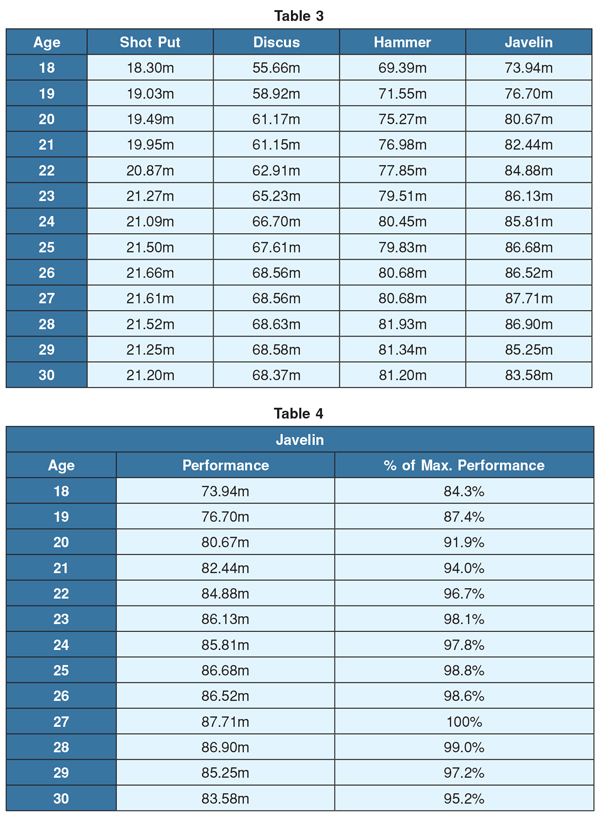 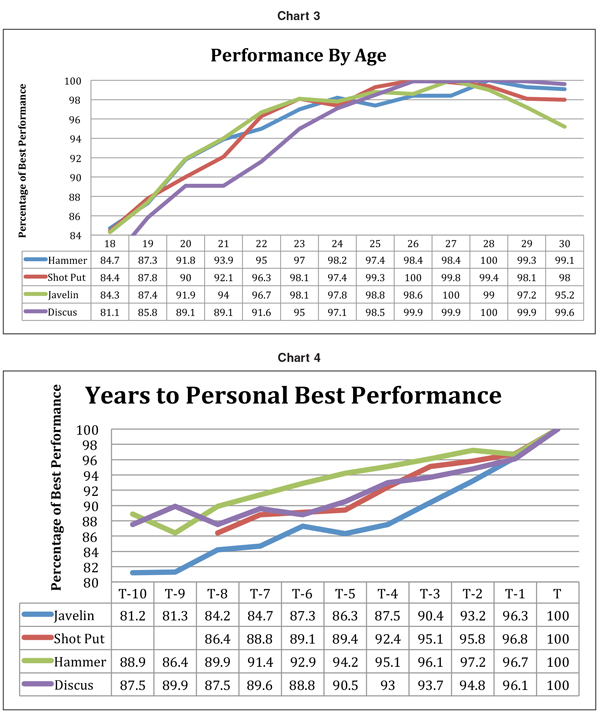 Performance Based on Years to Best Mark

A second analysis of performance development was conducted by charting each throwing group’s rate of development toward their best performance, with T indicating the year of best performance (Chart 4). This was done for either an 8 or 10-year period leading up to maximum performance. Unlike the Tilinger, et al study, which was able to chart performance going back to the initiation of full time training, this study was limited to a period no more than ten years prior to the achievement of best performance. For most of the athletes in this study the analysis began around their third or fourth year of full time training. Investigating a longer period of development was also complicated by the fact that many of the throwers born after 1985 used different weight implements at the junior level so it was risky to convert their junior performances (with the javelin, hammer and discus) to those with the senior implements.

There are a variety of observations and trends which can be drawn from this data analysis. These are subjective in nature, and can be used as a rough outline for coaches and athletes to follow when planning and comparing their long-term training with the elite competitors in the throwing events. A more detailed study and analysis will be necessary to generate results of statistical significance.

It was also evident that a more dynamic event, like the javelin in which elite performance requires a release velocity of up to 30 m/s, had a more rapid rate of development than the other throwing events (Chart 4). Conversely, because of the explosive nature of the event, the longevity of an elite athlete’s performance window does not appear to last as long as the other throwing events.

One final trend that was observed was that the rotational shot seems to be solidifying itself as the primary technical model for elite shot putters. This is not to suggest that the glide variation is not a highly successful technique, but that the vast majority of top male throwers in the past 20 years have used the rotational technique and have a virtual monopoly on performances over 22 meters. Perhaps the most likely reason for this development is ability of the rotational technique to suit a wider range of body types/nervous systems than the glide technique.

2. KNICKER, A. Kinematic analysis of the discus throwing competitions at the IAAF world championships in athletics, Stuttgart 1993. New Studies in Athletics 1994; 9:3, 9-16.

Don Babbitt is currently the throws coach at the University of Georgia, and has served in this role for the past 19 years. He has also been the CSCS Editor for the throwing events for the IAAF since 2010. As a coach he has guided 48 athletes in major international competitions in all four throwing disciplines. These athletes have gone on to win 19 medals. The most notable of these athletes are 2004 Olympic Shot Put Champion, Adam Nelson, and 2007 World Outdoor Shot Put Champion, Reese Hoffa.