“IT IS SLOWLY, slowly starting to sink in about how fast that actually was,” Sam Tanner says of his Collegiate Record 1500 set a week earlier, a 3:34.72 that also broke New Zealand’s indoor standard.

“It’s kind of been a bit heartening, seeing a couple labels that have been put on me, like, ‘New Zealand’s baton carrier for middle distance running,’ and, ‘You’re going to be the next Nick Willis,’ and things like that.

“It’s made me realize that running is definitely something that I’m going to do after college and hopefully go pro and make a living off it. It’s changed my outlook, and it’s been great.”

In his second year at Washington, the 20-year-old Tanner still hasn’t had a chance to wear the Husky uniform in an outdoor race. He came to Seattle after a brilliant high school career that started in his hometown of Tauranga, a city of 151,000 on the north coast of the North Island (a locale where young Tanner cut his teeth as a surfer, placing 5th in New Zealand’s secondary school championships in ’18).

Sold on the University of Washington (the other contender, he reveals, was Wisconsin), he enrolled that fall. He says, “One of the biggest reasons was that it reminded me of home quite a lot, just with the running trails and the trees and how green it is. Then also [coach Andy Powell’s] reputation. I really connected with the group. It just felt right and felt like home.”

Cross country was a bit of a mixed bag for Tanner, with the high point a 24th in the Pac-12. The season ended with a 233rd-place finish at Nationals. Indoor track proved much more promising, with Tanner hitting 3:39.49 in Boston.

Then the pandemic paused so many things, and in March, instead of going to the NCAAs, “I got to go home to New Zealand.” He continues, “I got to train really, really well in some amazing conditions year-round. I built a strong base.”

During the stay-at-home, Tanner worked with both Powell and Kirkwood. “The combination of Andy and Craig working together has just really worked for me this year,” he says. “They have a very similar coaching style, nothing changed dramatically in terms of workouts or anything like that. It was quite good and they both communicated really, really well.”

It wasn’t all just training. While in New Zealand, Tanner was taking his Washington classes online, finishing out last year’s spring semester and doing the entire fall semester long distance. “I found it quite difficult because of the time zone differences and things like that, but we have a lot of international students at Washington and the teachers were really good with it. It’s actually been quite nice to have that little year at home whilst continuing my education.”

That’s why, he says, he wasn’t terribly shocked by his CR. “That was the goal going into the race, to get the Olympic standard [3:35.00] and just try to race as aggressively and efficiently as I can to get that time down.

“When I was at the 100-meters-to-go mark, I looked at the clock and I started to get excited because I knew I was running fast and I knew I could get the time just over that last bit. I was hoping for it, and I’m just really glad that I came away with it.”

So where does he go from here? His excitement in Staten Island was admittedly more about getting the Olympic qualifier than the CR. How is he planning to balance his Tokyo dreams with his goals for the Huskies?

That’s down the road. “My goal right now is just to race indoor Nationals.” It’s a battle he’s looking forward to. “All you can do is control what you can control. That’s how I perform on the day. As long as I just roll up to the race pretty relaxed and have a little bit of nerves — I think that’s always essential. I just accept the pressure and then run hard. I’m a bit of an adrenaline junkie so I just love to go out and go hot anyway. That’ll be good.”

Since his big 1500, he says has not been contacted directly by any agents dangling pro offers. “They might have talked to Andy, I don’t know. I think Andy is involved with that process as well and he has my best interests at heart. I think that’ll be a conversation with Andy, myself and the agent, saying, ‘What sort of deals are out there? What’s my future going to look like in terms of going pro?’ Because this scholarship at the University of Washington is worth so much and so valuable. A lot of students would never get that opportunity.

“But you know, I’ve got opportunities back in New Zealand to get an education too, so we’ll just see what happens and what pops up.”

One thing that won’t pop up is a pro career riding waves: “I don’t think I’ll be returning to surfing competitions. I did reasonably well, but those were mostly just a one-off thing. I am going to keep surfing as my outlet to sport and just using it as a way to relax and kind of get back in touch with home…” He reflects a moment later, “There’s no surf in Washington, so…”

He’ll have to get his adrenaline on the track. 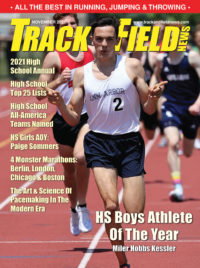