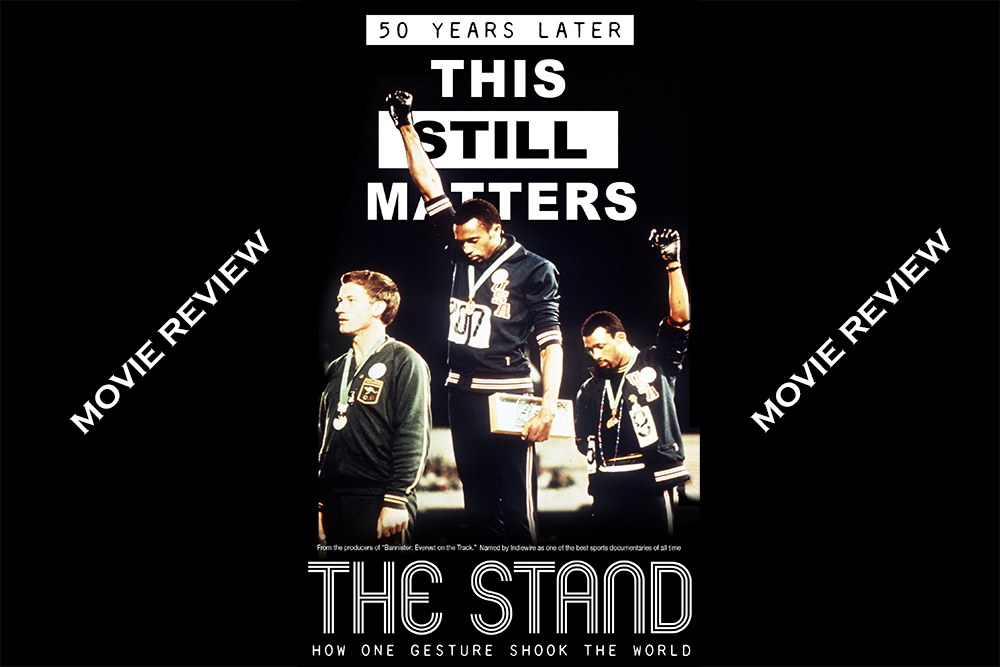 This ground has been covered in print and on the screen many times since the victory stand demonstration in Mexico City in ’68. But the 70-minute documentary, The Stand: How One Gesture Shook The World, now streamable on Amazon, You Tube, etc., tells the story in a way really not done before. Its timely release, when racial injustice continues to rivet the country, is very welcome. There is almost a straight line between the Jim Crow era, Martin Luther King Jr., Brown vs. the Board of Education, Tommie & John in Mexico City, and now the punishing exclusion of Colin Kaepernick, and the Black Lives Matter protests on our city streets.

This brilliant documentary covers all those bases, starting with the background of the civil rights marches and white backlash of the ’60s. The filmmakers have gathered an array of TV news clips and photographs from the era, and the documentary features interviews with many of the relevant athletes of the day.

Tommie Smith provides an eloquent account of the 200 final; John Carlos is denied a beer in Austin, Texas (“We don’t serve niggers”); Mel Pender expresses his pride in and love for John, after the demonstration; Patty Van Wolvelaere tells how uncomfortable she was made to feel walking down the street in Nashville with Ralph Boston; Larry Questad, a white sprinter—says he was “devastated” by The Stand.

Looking today at what Smith and Carlos did, you have to wonder what the fuss was all about. The gloves, the black socks, the straight-arm salutes, the OPHR (Olympic Project For Human Rights) buttons—was anyone harmed or intentionally insulted? As a white liberal sitting in the stands in ’68, at first I didn’t quite understand what they were doing, but whatever their protest, it seemed fairly mild and dignified. But I was shocked by the boos and catcalls from fellow Americans sitting around me. Their sacrosanct Olympic Games had been sullied by these ingrates. (IOC head Avery Brundage had previously reminded us that the Olympics were the only forum where negroes and communists could compete on the same level as other human beings!!)

A Brundage ally, Douglas Roby, then president of the USOC, when he heard that the Harvard rowing team supported the OPHR, deplored “the serious intellectual degeneration at Harvard.”

Tommie and John heard the boos as they left the victory stand and they both raised their arms again in beautiful defiance. We are more enlightened now, a half century later, wouldn’t you say? Sure, just ask Colin Kaepernick if he has experienced any vitriol from the stands for his moderate gesture of kneeling during the anthem.

Smith and Carlos were dismissed from the team and given 48 hours to leave Mexico City. Public opinion was widely antagonistic to them, but one academic in the film remarks that the dismissal brought even more attention to the issues. It is amazing how much staying power the demonstration has had over the years. It is one of the most famous events in Olympic history—truly a gesture that changed the world, or at least tried to.

Everyone should watch The Stand—a very important slice of U.S. history; kudos to the co-directors, Tom Ratcliffe and Becky Paige.