When triple jump legend Willie Banks topped the election to be the USATF rep to the IAAF, he wasn’t surprised that he won; he was surprised by how much. “I thought it would be much closer,” he says of the 391–217 tally over incumbent Stephanie Hightower. “I know that there are people in USATF that really wanted to see a woman in that position and I understand that. I do believe that women should be represented on an equal standing with men in the movement. I just don’t believe that there isn’t a way to do that without restricting it to just women.”

The 62-year-old California native says that his decision to wade into the fray was months in the making: “People asked me if I would be interested and it took me a good little while to come up with the reasons why and the reasons why not. You know, you make your lists. “I felt it was time to get involved because of all the issues that were starting to mount up, including the whole Russia probe, the new [IAAF] ranking system that tends to hurt the U.S.’s ability to have team certainty, the issues surrounding doping and WADA, as well as my concern that the participation of young people in track & field seems to be waning because of a lack of big ideas to help raise the sport back to a level that will be sustainable.”

To have an impact on any of those issues, Banks will have to learn to navigate his way through the IAAF structure and win the support of enough of the voting membership to join the IAAF Council, the most powerful force in the sport. More so if he hopes to make it all the way to vice-president of the organization at next fall’s IAAF Congress in Doha.

To that end he has consulted with the United States’ most recent VP, saying, “Bob Hersh has been amazing. He has guided me for years and years and he’s been very helpful recently in helping me understand the ins and outs of the IAAF.”

Banks has also reached out to the defeated Hightower, who had been working to position herself to be elected as the IAAF’s first woman VP. As of this writing, they have not yet connected. He says, “I think it’s going to take a while for Stephanie to get over this election. She’s a huge competitor and a very strong individual who I respect tremendously. I hope that she’ll be able to help guide me with her experience over the last 4 years and help me move into this transition.”

Banks One Of The Great All-Time Triple Jumpers 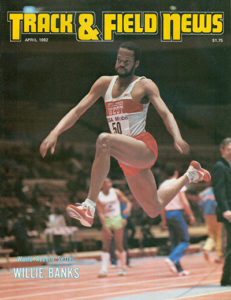 It has now been 26 years since Willie Banks hung up his spikes after failing to make his third straight U.S. Olympic squad, but his name still figures prominently in the TJ’s statistics, as you’d expect from somebody who set World Records indoors and out. In ’82 he became the first undercover 57-footer, reaching 57-1½ (17.41). Three years later he came oh-so-close to becoming the event’s first 59-footer, missing by just a half-inch with his 58-11½ (17.97) at the ’85 USATF Championships. The mark stood up as history’s best until Jonathan Edwards broke it 10 years later. And it was the all-time U.S. best until Kenny Harrison broke it in ’96.

Even today, only 5 other men (2 of them Americans) have ever jumped farther. Although he was never an NCAA champion while at UCLA, he was a 3-time Nationals scorer (twice the runner-up) and also scored in the long jump, where he had a PR of 26-7 ¼ (8.11). He went on to win 4 USATF triple jump titles. The ’83 World Championships delivered a silver medal and he finished 6th in the Olympics of ’84 and ’88.

“It’s going to be a challenge, of course,” he says. “I believe I do have friends internationally that I can rely on to help me extend that network of friends. I hope to convince [the IAAF delegates] that I would be a good Council member.” Since the formation of the IAAF in 1912, the U.S. has always had a member, with Hersh being the only one ever to hold the rank of Senior VP.

Looking forward, Banks says that on the case for the reinstatement of Russia to full participation in the IAAF, “I’m in lockstep [with IAAF head Seb Coe]. We should be the No. 1 anti-doping country in the world and I think we should support what Seb is trying to do to make sure that the spread of doping is reversed. We need to institute programs that make sure that every country in the world has the same testing regimen that we have in the United States and the UK and Norway and other countries that truly believe in drugs out of the sport.”

On the IAAF rankings—which are currently on hold as a means to qualify athletes to the Worlds and Olympics: “There’s nothing wrong with having rankings. It’s a good thing. The problem is when it affects processes and qualifications. If you provide rankings, they should be a guide to performance, not a guide to qualification.” 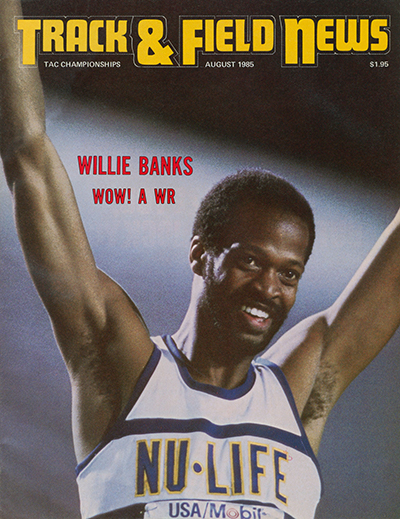 But where Banks—the consummate showman as an athlete—gets truly excited is when the conversation shifts to promoting the sport. “If athletics is to grow, we need to have big ideas,” he says. “We need to try something new. We need to try and stay with the idea of entertainment. Because if we lose the idea that sport is entertainment, we lose the fans. In the United States, ours is one of the few sports that a woman can actually make a living doing and be famous and make a change in the lives of young women who aspire to be like them. When you talk about athletes who can make millions of dollars being on the cover of magazines, being on television, you have to look to track & field.

“For men, it’s harder. A lot of your best athletes are playing [ball] year-round and cannot go out for track & field to show how fast they are, how high they can jump, how far they can throw. We’re losing our male heroes to other sports and so to me it’s becoming a female sport. We need to catch that and massage it and grow it.

One of the innovations Banks is willing to support is the inclusion of a women’s decathlon. “I don’t see why not,” he says, noting that he was one of the people pushing decades ago for women to compete in his own event, the triple jump. “I understand people are working hard to be heptathletes and it’s always hard to make a change, but if we’re going to be to continue to say that we want equality for the sexes, we need to move to the decathlon.”

With the ’21 World Championships—the first ever to be hosted by the United States—moving ever closer, Banks feels that the IAAF needs to work effectively to maximize the sport’s promotion in the U.S. “The United States is the No. 1 track & field team in the world and the market in the United States is huge,” he says. “Every sport looks to the U.S. as a major area of exploration and growth. I will work to let the IAAF know that USA Track & Field is a great partner and will help make 2021 into something that people will never forget. This will be a time where the U,S, will finally get an opportunity to show just how important track & field is to our nation.”