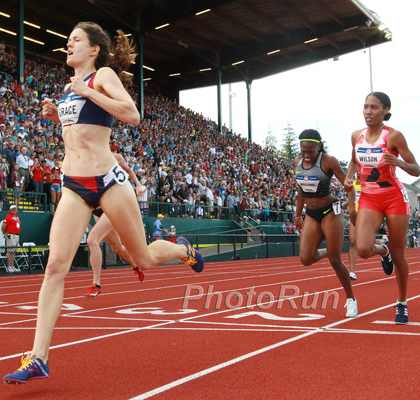 When Kate Grace stormed across the 800 finish line in 1:59.10, winning the most controversial race of the Trials, she did, well, nothing.

“It’s so funny,” she recalls. “I looked at pictures. I did nothing. I just kind of stand there.”

Looking back on it and trying to make sense her experience and the ensuing controversy over Alysia Montaño’s fall—the “craziness,” she calls it—Grace reveals that it was so much more than nothing that was going on inside her head.

The 27-year-old Oiselle runner says, “I’m not one who likes to overtly celebrate. I like more being with my people. And also, athletes who I greatly respect just had this crazy thing happen to them. So not only do I not normally celebrate, my instinct at the time was not to start jumping up and down.”

Instead, she looked up into the stands and almost immediately locked eyes with her mother, Kathy Smith, a famous-in-her-own-right fitness guru. “I got this amazingly warm feeling,” recounts Grace.

Then, she says, “I saw Drew [Wartenburg, her coach], same deal. And then I did a victory lap and when I got to people that I knew, parents of other people competing and the Oiselle crew in the stands—when I saw them, that’s when I started crying. For me, the victory, it’s the whole thing. The victory is everything that’s happened in the last 4 years and more than that. All the work that I’ve done this year. The race is the way to show it to everyone else. The work is everything all along.”

Behind her, the tv cameras focused on Montaño and heated discussion erupted of who was to blame for the fall—and the interference with Brenda Martinez and Molly Ludlow, both of whom were in position to grab team spots when they were knocked off balance.

When the crash happened, says Grace, “I was aware of it, but I was focused on what I had to do.” She had clung to the inside rail throughout the race, and in the last turn she appeared trapped—but not worried.

“I was boxed, and our thing was, we had faith that a box would open,” she says. “I had such a strong last 100, that even if craziness hadn’t happened, a box would open and I had faith in my ability to close and get on the Olympic team.

“I don’t know what would have happened. Again, I closed hard in the last 100, and I did put a gap on the field so I know that I had a close there. I would say that, by Drew’s definition of ‘win’, 100% I was winning my race. I was making my Olympic team. And that’s all I have to say about that.

“I visualized many different scenarios before the race, right? In one of my scenarios, there was a fall. In one of my visualizations, it was more of a gutcheck, run-to-the-line finish where you are stride-for-stride with somebody. And we didn’t have that kind of race and I look forward to another race like that.

She adds, “It was a crazy race and it’s heartbreaking to me to see athletes I respect so much have something like that happen to them.”

However, Grace has to focus on the future. “I’m on an Olympic team and for me, this is an incredible moment for me, and if anything, it has allowed me to continue to make moments for myself and to make moments in Rio. And more moments will come, and I am incredibly grateful for that. I am thankful for that and in no way do I feel like I was denied attention. If anything, I didn’t know how to react at the end. I don’t know what I would have done if there were more attention on me.”

She adds, “I run for me, I run for my teammates, my coach, my loved ones, and later, I was able to celebrate with them. And that is what gives me joy.”

For Grace, it all started 11 years ago with words of encouragement from Jimmy Grant, the track coach at LA’s Marlborough School. Forced to run cross country to train for the soccer team, she finished 2nd in her first race. Grant saw this and said, “You have to run track, you have talent in this.”

“These were the days of Christine Babcock and Jordan Hasay, and he would tell me that ‘When you start training for the mile, you’ll be able to beat them.’ And I remember thinking that was a crazy, crazy vision.”

She made her way to Yale, where she was a 4-time All-American in the 800, hitting a best of 2:03.41. Her 1500 came down to 4:20.66. With her eligibility finished, Yale coach Mark Young and alum Sarah Lesko encouraged Grace to keep going for the next year’s Olympic Trials.

“It made sense to me,” says Grace, who would graduate with a degree in environmental studies. “I could focus for the very short term to try to run for the Trials. The thing that both of them said, which I agree with, is that I trained hard in college, but I was not like a full-time athlete. I had extracurriculars that were important to me. I didn’t treat it like it was a job, like it was the only thing in my life. I trained mostly for our league championships and to run well there.

Injured at the time, she went off on a school trip to Europe that summer. By the time January hit, she had made up her mind, and showed up to practice with Frank Gagliano’s New Jersey-New York TC.

“I came to him out of shape, completely out of shape physically.” Six months later, she had qualified for the Trials in two events, reaching PRs of 2:01.63 and 4:10.57.

“So that was all good indication, but by the time the Trials came around, I was a basketcase of nerves, I had overtrained myself, I had tried to cut weight in the wrong ways and I was completely underfueled.

“But what I see now, is it was a great experience to go there because coming into this one I now understand how much hype it is. You can never understand it until you’re there. I had never been to a USA championships, I just didn’t know. And the Trials are so much more than that. I didn’t know the level of hype around it. And how to prepare for that. So I experienced that, and that was the positive from the Trials.”

But, Grace says, 2012 was a rough ride. “I had improved that season, but I undercut myself mentally. I didn’t make it out of the rounds in the 800, I barely made it out of the rounds in the 1500. My mom was there and she had to have an intervention for me because I was so nervous and anxious and not really eating. It was like a perfect storm of doing everything wrong.

“It’s crazy how different this time was from last time. I am proud of the growth I have made, both athletically but also with my mental game. I wasn’t eating properly. A lot of female athletes do this when you first start going pro. You think that one thing will be a magical difference in your training. It really hurt me that year and I didn’t really understand it for another year even, being able to conquer that and understand nutrition and fueling.”

Grace’s mother was instrumental in her reinvention of herself: “Mostly because of her work that she had done with television and with speeches in front of large audiences, she was able to give me the idea of being calm and using zen meditation as a way to calm yourself and have a peace within the chaos of whatever is going on around you and the high stakes. That’s been amazing and helpful.

Now, Grace is looking ahead to Rio: “I’m focusing on my race. I’m focusing on preparing myself to be my best self at that race. On the 4th, I was my best self. I PRed—that was my plan. I think that going to the Olympics will be the same thing. I think that I will have to PR again to make the final. And training, more strength, we’re doing more speed and sharpening to be in that place again. It’s going to be very much focusing on running my best race. It’s kind of the same thing there as here. You treat every round with extreme focus and you have to make it through every round and there are 3 medal spots and each one of those is an incredible honor.”