Will the IAAF and its timing and measurement partner, Seiko, ever properly grasp relay splits and—dare we dream?—take some effort to get their presentation right? Or at least get them within a country mile of user friendly?

They’re now four go-rounds and five years into the World Relays, got a lot wrong from the start when it comes to splits—an essential component for fan enjoyment and statistical understanding—and seem to have learned nothing along the way. Or perhaps have but can’t be bothered. (Click here to cut to the chase of my commentary from 2015, below) Yes, this is a rant, some will see it as a nit-pick. For me it’s a cry of frustration because the needed upgrades to fix things splittish are simple. Fan-friendly, rapid and accurate splits presentation is hardly the highest mountain the sport must climb. It’s a molehill so why not crest its summit? Other meets and timing companies, lean operations with pockets not half as deep, have been leaving the IAAF’s product a lap behind for well over a decade.

Plus ça change. A seedling of hope sprouted in January when the IAAF announced a new initiative to modernize and raise its presentation game. The IAAF’s release on the subject reported, “Some of the brightest minds in sports technology gathered in London last week to attend the first IAAF Innovation Workshop, designed to promote creativity and collaboration among the IAAF’s technical partners and suppliers.” Seiko seemed to be on board. “I congratulate the IAAF on this initiative,” said Shuntaro Ishii, President of the company’s Time Systems division. “I think there is now a new synergy among the many companies working with the IAAF to improve the sport and the way it is presented to the world.”

This week’s press release announcement that the IAAF and Seiko have extended their now 34-year partnership struck a resolute and upbeat note in harmony with the January statement. There was also some self-congratulation.

“The technologies developed by Seiko for athletics have evolved dramatically over the years so that more data of ever greater precision is delivered more quickly and more widely to officials, athletes and audiences alike,” the release stated.

While there is certainly some truth in that and welcome technological advances have been rolled out, in Yokohama, where splits are concerned we’re seeing more of the same. And viz that “precision” part, “precision mistaken for accuracy” may need to be edited in. I hope this last criticism is off base and would be thrilled to eat my hat for suggesting it if conclusive counter-evidence is presented. But look at the 4 x 400 splits from the heats in Yokohama. They’re all reported to the 100th of a second and the splits for the first 3 legs in every heat end in zero. Can’t be right. While it’s not statistically impossible, it’s a winning the lottery 37 weeks in a row anomaly. Round ’em to the tenth! Nit-picking maybe but one also wonders how the first legs were timed? At past IAAF events, including World Championships, some first-leg times reported were provably wrong. How’s that for “precision”? For credibility’s sake, sweating the details matters. Appearing to care matters too.

I should add that relays are not the only events for which the fans are shortchanged on split data. The “little guys,” those other companies in the timing business mentioned earlier, cast the ostensible heavy hitters—including Diamond League timer Omega—in their shade on individual races, as well. What I’d like for German Sandwich Day (who knew?), September 27, the date the World Champs will start up this fall in Doha, is a splits presentation upgrade. But with the World Relays teed up right now, baton splits are au courant.

I’ve railed on too long. Time to put before the court my “testimony” published on the T&FN site after the 2015 World Relays. Has anything changed? Not from where I sit. (Some examples below are based on 2015 distance medley results. The event has been discontinued at the global baton fest but the points remain valid.)

Splits Not Rocket Science, Just The
Essential Condiment At A Relay Feast

May 2015, Nassau Bahamas—With the World Relays the IAAF has marched out into exciting new territory viz meet presentation. However, when it comes to efficiently telling the tale of a relay meet’s essential numbers, work is needed. Not ground-breaking work, just a step up to the best-practices level set by the better timing companies in (call me a homer) the United States—modern relay racing’s cradle.

At a relay meet what are the most important stats (after teams’ final times, of course) whether you are a stadium or broadcast announcer, a spectator looking at the stadium scoreboard, or a fan at home following the action online? SPLITS! How fast did all the athletes on each leg run? Elemental stuff.

Yet on what was otherwise a first-rate meet World Relays website, the best analogy for how splits were presented would be taking a baseball box score or cricket scorecard and scattering its essential data out to three or four sub-scorecards and forcing the interested fan to consult all of them in order to sleuth out what happened. It doesn’t need to be that way.

The punchline first. In a baton-race “box score,” for a DMR, let’s say, this (from the NCAA Indoor Championships) is what you want to see.

Or better still, this (from the Penn Relays). All the information, teams, personnel and their splits in one easily digestible bite.

(one caveat, in some instances the splits above do not add to the final time exactly and are off by as much as 0.02 due to rounding errors; how’s that for TMI? At least we can tell what the errors were) 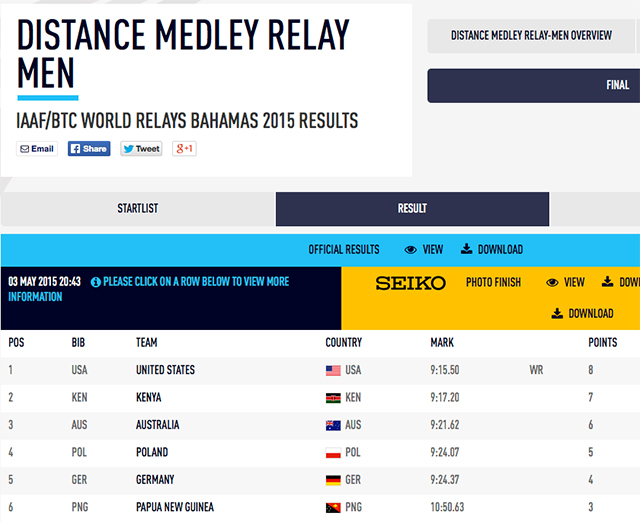 World Record! How did the race play out? On the plus side, scroll down and the leaders after each lap were conveniently, and in timely fashion, cataloged. 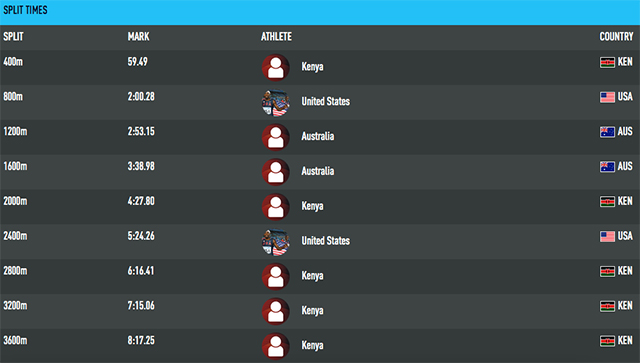 Zang! A back-and-forth three-team slug-out. But who were the players in the drama? For that one had to consult the startlist. Mouse-click… 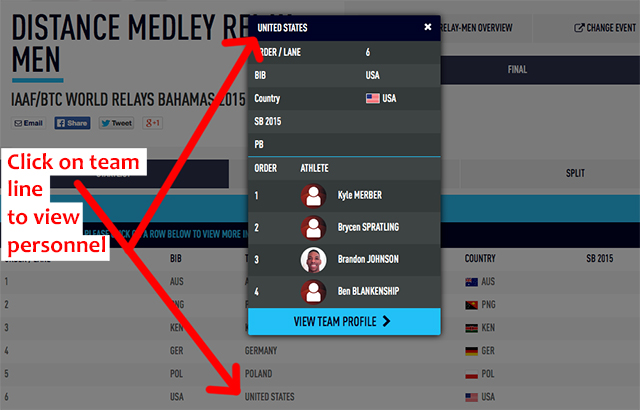 Merber, Spratlng, Johnson & Blankenship. The Replacements! That info just one additional click away. What were their splits? Not available here. Maybe under the “Split” tab? 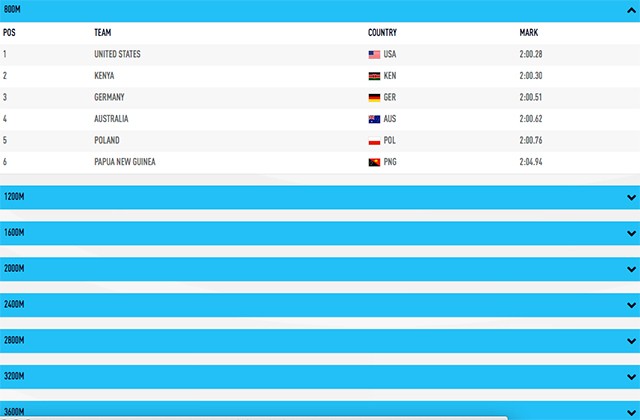 Hmmmm… Not so much. Instead lap times for every runner at the end of each lap. Informative, great for building a by-lap chronology of the race while referring back to the startlist personnel data. Useful, indeed, for individual races (particularly if one had photographic memory or scribbled the athlete’s names on a note pad), but this was a relay, a DMR: legs of 1200, 400, 800 and 1600 meters.

Without breaking out a calculator, converting minutes, seconds and 100ths of seconds to seconds, then adding or subtracting and converting back to minutes and seconds, the crucial data remains buried. All is not lost, though. The IAAF, to its credit, now provides race analyses. Just one more mouse click away… 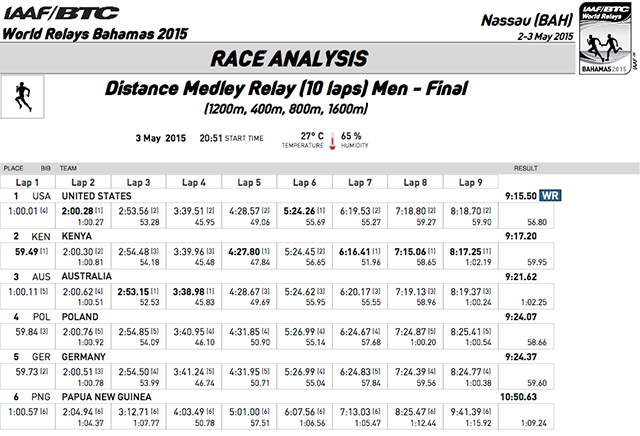 Voilá! Splits. Crossmatch with the startlist personnel box and the statistically-interested fan is finally in the clover. Almost. Video analysis shows splits at the finish line, recorded using transponders in the batons, were usually solid within a few hundredths, but one 4×4 final women’s first leg was off by close to a full second.

In fact, enough 4×4 first legs were inaccurate by more than a 10th of a second to deduce that they were probably hand-times taken by less than expert timers. As such, per IAAF rule, they should be published in 10ths, and not misrepresented as fully automatic times.

Expert eyes also have questioned the published 4×1 anchor splits; one wonders if these, too, were manual times misleadingly represented to the 100th? Given that there were some big split accuracy problems at the ’14 World Relays, including Yohan Blake being erroneously credited with a 4×2 split 0.4 faster than what he really ran, these were not one-off glitches. (Note: It has since come to T&FN’s attention that the erroneous Blake 19.0 split in ’14 did not come from official timing sources)

Unfortunately, if you give them bad data, fans, athletes, coaches and media end up trusting it when they shouldn’t. Here is what widely read blogger Alan Abrahamson—an Olympic sports generalist, not a track expert—wrote about the men’s 4×1 in Nassau:

Indeed, the stats showed that while Bailey ran an 8.83 anchor, Bolt—who is still far from in top shape—ran an 8.65.

If those times seem like freak-of-nature times for both, there’s this: the batons at these Relays had transponders in them.

The precision for which that allows may be such that all of us have to recalibrate the way we think of relay splits going forward.

With all due respect to Abrahamson, his comment mistakes precision for accuracy. That’s not entirely his fault; he accepted the numbers he was given without noticing, for instance, that in the heats Dominican Republic anchorman Yancarlos Martínez, whose PR is an altitude-aided 10.29, was credited with an 8.92 split. Anything is possible, of course, but that split defies credibility and raises questions about the timing methodology generally.

No baseball fan would accept, say, batting average numbers based on a rough count of plate appearances; a number that is fully accurate to the level of precision expressed is expected. Likewise, in our sport numbers matter. They really matter. We should should aim to get them right.

Back to the punchline as interrogative.

Why not just give us—the fans in the stadium, the announcers, the scoreboard, the viewers at home who’d rather not attempt all the mouse clicks and math—something like this?