THE FIFTH IN A SERIES of event-focus articles on the U.S. men’s 110 hurdles, a loaded discipline for Team USA and decidedly one to watch when competition resumes.

IN JUST A YEAR, Grant Holloway went from being an exciting prospect with plenty of potential to the world champion and an Olympic podium favorite in the high hurdles.

Has success changed the 22-year-old Florida alum? “Nah, I’ll still be treated like shit at practice,” he says. “People who are older than me still keep me in my place. I mean, that’s just the art of the family. I’m the youngster here in the group.

“You know, they still treat me with respect, but if I have something to say, I usually get the last say in it. And you know, that’s what you want in your training partners. You don’t want people to change just because you have a gold medal to your name. You want them to still treat you the same as if you were in college.”

After that it was all about the 110s, and Holloway hurdled to 2nd at USATF behind friend and rival Daniel Roberts. His only Diamond League appearance was a so-so 6th in Paris, but he stormed his way to the World gold in 13.10.

His competitive season stretched from January 19 to October 2 and the length of it all caught up to him in Europe. “I just literally forgot how to run the hurdles; [coach Mike Holloway] said it was just fatigue. When you go so long in a season with no breaks, you keep pushing the body to the mat, to the mat, to the mat, at some point your body’s gonna want to shut down on you. That’s exactly what happened.”

Yet after Paris, Holloway went back to training and came to Doha absolutely ready. “I trusted my training, I trusted my coach,” he explains. “He said, ‘All you have to do is react to the gun, keep your hands low and go have fun.’

“The thing is, I always put too much pressure on myself that sometimes I can’t perform the way I want. So really, at the end of the day, I just went out there, executed and believed in myself.”

The Doha final is stunning to watch. The 6-foot-2 (1.88) Holloway, the heaviest man in the field at 190lb (86kg), exploded out of the blocks and reached the first hurdle before anyone else. The field, seemingly caught off guard, struggled in his wake as he never was headed en route to the gold.

The trick—in addition to a blazing start worthy of an Olympic dash finalist—was all in his head, he says: “As soon as I got to Doha, I kept telling myself, ‘You’re going to win, you’re going to shock the world.’ I knew it was going to be close, but I kept my hands low and I just kept pushing and made sure I got out two steps before they did.”

Holloway, who had turned pro after the NCAA to forgo his final season at Florida, says his off-season training following the Doha win was “awesome,” adding, “Winter was probably the best training I ever had.”

It showed in his only ’20 meet to date, a mid-February appearance at Clemson. “I felt like I had a lot to prove that day. I was supposed to run at the Millrose Games [a week earlier] and I couldn’t get a flight out because the weather here in Gainesville that day, it was horrible. We had thunderstorms, we had everything. And I had a lot of people saying, oh, I was scared of Daniel [Roberts], I was scared of Omar [McLeod]. Or I was hurt.

“So I went to Clemson with the team and Keni Harrison was there and we talked… And Keni was like, ‘You might shock the world today.’ And that’s what I kinda said to myself.”

A talented long jumper as well (26-9¾/8.17 as a soph), Holloway says we might have seen the last of him on the runway. “That’s a Coach Holloway question. I said I want to try and have some fun out there. But he said I’ll never touch the long jump ever again. So it’s up in the air right now.”

When the Olympics was postponed, Holloway admits, “I was asleep. My girlfriend was leaving for work, and she was like, ‘Everything just got canceled.’ I was like, ‘What? Really?’ and I fell right back to sleep. But then I woke up to a monsoon of messages and people wanting to do interviews.”

The massive schedule-earthquake didn’t shake him, he says: “I’ll be 23 at my first Olympics. That’s a great age to be at. I’m taking it day-by-day. I’m practicing Monday through Thursdays. I’m staying on my grind, I’m just going to keep chugging forward.

“We have nowhere to train. Right now, Coach Holloway and the training group, we’re all trying to get an open field every now and then. I have this one little weightlifting facility I call the dungeon. It has a nice little benchpress. I can get under there, do some squats and take care of my body. Other times I’m in an open field doing my sprint work and my hurdle work.

“I’ll train here at my open field by where I live. This one house loves calling the cops on me. So the cops would come out and watch me practice… I don’t think I’m hurting anybody when I’m out there training by myself, you know? It’s mind-blowing to me.”

Meanwhile, Holloway keeps grinding. “The sky’s the limit,” he analyzes. “As long as I stay healthy, stay grounded and stay humble, I feel like I can conquer anything.” 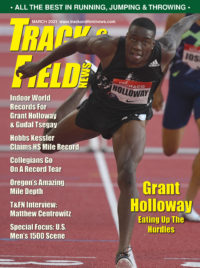