BACK IN MARCH, this column was titled, “Call Me A Heretic, But The IAAF’s Diamond League Tightening Might Actually Be The Right Move,” so obviously I’m a fan of the concept of producing a more compact TV product. As Seb Coe explained in announcing the cuts that have been made, “Our objective is to create a faster-paced, more exciting global league that will be the showcase for our sport. A league that broadcasters want to show and fans want to watch.” Who can argue with that logic?

But lest you think I’ve become totally besotted by drinking of the Monaco Kool-Aid, now that all is said and done, I find that I’d have tackled the fix in a slightly different way. While I’m still all for the 90-minute TV show that is to be the centerpiece of the DL, I now don’t think there was any need to have reduced 4 of the disciplines to what seems to many to be permanent second-class-citizen status. (Yes, this runs somewhat counter to my column of April ’16, in which I trumpeted, “If Ever A Sport Needed A Darwinian Pruning, It’s Ours—Sorry About That.”)

To its credit, WA did leave itself an out, saying that the roster of events could well change for ’21, but why didn’t they just set up the whole thing in the first place in a less dogmatic fashion than they have? The nuance of ’20’s not being set in stone in perpetuity was clearly lost on many of the principal players, given the strong negative reaction, particularly from TJ ace Christian Taylor.

If I were king, I’d simply have chosen the 4 events (200, steeple, TJ, DT) and announced that while they’re not going to be part of the of the ’20 calendar, they definitely will be in ’21, with another 4 events sitting on the sidelines for that year.

Looking down the road, no, I wouldn’t envision every discipline to be part of such a rotation, because let’s face it, all events are not created equal, and a certain amount of Darwinian selection needs to come into play. If the meet promoters as a whole think an event is crucial to putting butts into their seats, it needs to be staged. There’s no such thing, for example, as a meet with major-league aspirations that doesn’t have a 100 or a 1500/mile. Figuring out which events deserve full full-time status will be fun, but they managed to take the first step already.

(An aside: I don’t understand how the discus didn’t make the original cut. With the iconic discobolus statue being such an historical symbol of the sport, what says track & field more than Al Oerter’s event?)

Another simple step WA could/should have taken was not to have lumped the men’s and women’s events together. Think of them as different disciplines. Using the ’20 field-event schedule as an example, they could have sidelined one sex’s triple jump and replaced it with the long jump and then done the same with the discus and, say, javelin. And I’d throw the hammer into the mix as well. That way, each discipline would retain its status as being fully worthy of consideration. Relegating those orphans to “included disciplines” in some Diamond League meets and “featuring” them in the Continental Tour meets just isn’t the same thing. Nobody wants to play in the Second Division after they’ve had a taste of the Premier League.

A big bonus of both rotating the events and splitting the sexes is that it gives WA the opportunity not to be locked into events which may be in a down cycle, and at the same time to be able to plug in something that projects as hot. With records being such an integral part of keeping the sport in the public eye, one certainly wouldn’t want to miss staging a WR when there’s a decent chance of seeing one. You know, like either the men’s (Taylor vs. Claye) or women’s (Rojas vs. Ibargüen) triple jump. Oops.

Major kudos to Taylor, by the way for his “unionizing” efforts. I just wish he’d come up with a name that included track & field (or even just track) in its title. I’m afraid that an organization about “athletics” will gain zero traction with fans and media in the U.S. and his effort can use all the help it can get. There have been countless other attempts to organize in the past, but all have faded—most quite quickly—after an initial rush of enthusiasm. A lot of hard work is required and it’s tough enough to be training as a world-class athlete without suddenly having to deal with another major project. And the alphabet-soup gangs in Indianapolis, Monaco and Lausanne have understandably never gone out of their way to cede any of their power.

Fortunately, Taylor & Co. are dealing with a far different international governing body than that of decades past, but every time I hear talk of athletes organizing, I’m reminded of an IAAF press conference I was at in Monaco back in the ’90s, when an at-the-peak-of-his-dictatorial powers Primo Nebiolo was asked about the subject and he famously thundered, “There will never be an athlete union!” Here’s a chance for the new WA to prove that it’s really new. □ 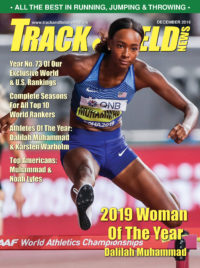