HERE AT T&FN WE LIKE TO THINK of every one of our monthly offerings as a “landmark
issue,” but this one really is special. It represents the 700th edition we’ve published since the first
one rolled off the presses, dated February 1948. At the risk of dragging your minds away from the
important current goings-on which have made this one of the more thrilling indoor seasons in
recent memory, let’s take a nostalgic look at the preceding “century issues.” 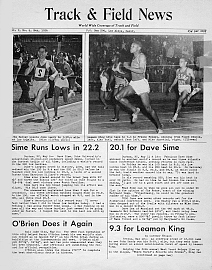 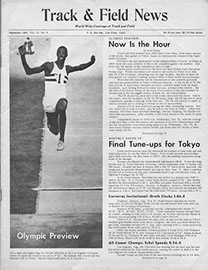 ISSUE 200, SEPTEMBER 1964. Ralph Boston made the front page for upping his own long jump WR to 27-41/4 in winning the Olympic Trials, which we somehow covered (men only) in a concise 21/2 pages. Most of the issue was dedicated to a preview of the
Tokyo Games. Briton Lynn Davies, who would upset Boston and Igor Ter-Ovanesyan for the gold, was only picked for 5th place.

ISSUE 300, II MAY 1971. The “Dream Mile” lived up to expectations, with Marty
Liquori outduelling WR holder Jim Ryun. “Jim made it boring by being so good,” said Liquori of Ryun’s previous dominance. “Maybe we can make it interesting again.” To blunt Ryun’s speed, Liquori went out hard. “I wanted us both sagging in the stretch, looking more like boxers,” he said. His strategy worked.

ISSUE 400, JANUARY 1978. The Athlete Of The Year crown for ’77 went to Cuba’s incredible 400/800 talent, Alberto Juantorena. It was the second win in a row for El Caballo, but it was the closest voting ever as he beat Edwin Moses by only 4 points. Moses actually lost a race during the season: that was something that wouldn’t happen to him again for another decade.

ISSUE 500, JUNE 1986. Up-front honors went to Texas A&M frosh Randy Barnes. Just a 66-91/2 putter with the 12-pounder a year before, he had exploded to 71-91/2 with the 16 to replace shot icon Randy Matson as Aggie school record holder. It had been a good month for American Records, Joe Dial claiming three in the vault, Jud Logan getting a pair in the hammer and JJK upping the heptathlon standard.

ISSUE 600, NOVEMBER 1994. One of the brightest covers ever featured “The Green Machine,” Dennis Mitchell, who had just won the Grand Prix 100 title over Linford Christie, Jon Drummond, Frank Fredericks and Donovan Bailey. Interview subject Mitchell said, “It’s our nature as sprinters to be a little cocky, self-centered and to jawflap some. It’s all just part of the game.”

IT HAS BEEN MY PLEASURE to have worked on no fewer than 437 of our 700 issues (my first was January of 1970). Publisher Ed Fox and Associate Editor Jon Hendershott have been around for even a few more. Executive Publisher Janet Vitu has been on board since ’76 and Managing Editor Sieg Lindstrom has more than a dozen years of service. The joys of working (Work? This is work?) for T&FN can quite easily become a lifetime commitment.

If you’ve got a head for figures you may have noticed that the century issues haven’t come at exactly regular intervals. For various reasons, during our 56-year life span we’ve had volumes of 11, 12, 17 and 18 issues. Assuming that we continue on in a normal 12-issue mode, Issue 800 will roll on by in July of ’11. And you can expect the super-landmark 1000th issue to come out in ’28.
I’m planning on reading (and writing?) it; hope you are too!