HAPPY BIRTHDAY TO US! The first edition of T&FN rolled off the presses in February of 1948 (see p. 37). As the first few decades rolled by, birthdays didn’t seem all that important. The 10-20-30-40 milestones went unremarked in our pages, before we celebrated 50. And now we’re at 60! What was happening in the previous landmark Februaries? 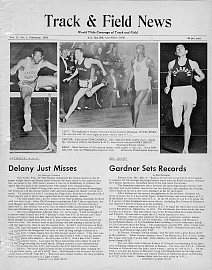 20th BIRTHDAY, FEBRUARY 1968: Our “20th Anniversary New Look” found the magazine going to full-page pictures on the front page for the first time outside an Annual Edition. Fittingly, Dick Fosbury’s new look in the high jump—heretofore rarely seen outside the West Coast—graced page one. Inside the magazine, the NCAA/AAU war still raged and Bob Seagren raised the indoor vault WR to 17-4¼ (5.29).

30th BIRTHDAY, FEBRUARY 1978: Highlighting our rankings of ’77’s best off-track athletes, the cover dubbed Bill Rogers “King Of The Road.” Inside, high jumping was huge, with a World Record 7-7¼ (2.32) from diminutive Franklin Jacobs and a pair of ARs from Joni Huntley. And 10 years after Fosbury, our Tech Talk author postulated, “Although the straddle should be the high jump technique of the future, it probably will not dominate.”

40th BIRTHDAY, FEBRUARY 1988: Jackie Joyner-Kersee was so good that she might have been Athlete Of The Year based just on her long jumping and hurdling. But for good measure she also dominated the heptathlon. The Soviet Union and East Germany were still in full flower, so JJK was the only American to gain a No. 1 rank. The Women’s Performance Of The Year still stands today: Stefka Kostadinova’s 6-10¼ (2.09) in the high jump.

50th BIRTHDAY, FEBRUARY 1998: For the first time, we actually made a big deal out of getting old (err, our maturity). “King Carl” Lewis was feted on the cover as “the best of our 50 years.” It was his record 13th appearance, a mark that still stands. Inside we detailed a lot of history, with a by-year recap, interviewed cofounder Cordner Nelson and chose our 50-year All-Star Team.

It has been my pleasure to have worked on no fewer than 496 of our 759 issues (my first was January ’70). Managing Editor Sieg Lindstrom, Associate Editor Jon Hendershott, Publisher Ed Fox and Executive Publisher Janet Vitu have also been around forever. The joys of working for T&FN tend to make it a lifetime commitment. After all, Cordner is still writing for us as he approaches his 90th (see p. 37).

So at that rate, you’ll only have to put up with me for another 30 years or so, as I have every intention to be reading (if not writing!) the landmark 1000th edition of the magazine in ’28. That will be delivered by Apple’s latest gadget, direct from us to your brain.