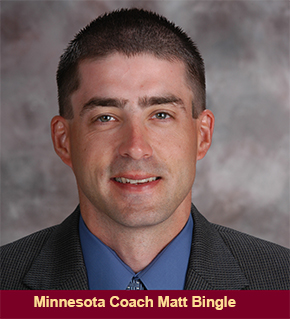 Matt Bingle and his Golden Gophers moved back into #1 in the last week of the indoor dual meet rankings and claims the Big 10’s first women’s dual meet championship of any kind.

Minnesota had just a single dual but it was a good one, a narrow 2-point victory over #7 Wisconsin. Texas A&M falls back to #2 and Indiana holds on to #3.

The big prize, though, is the season-long comprehensive indoor/outdoor dual meet championship. The first of those rankings will be released in late March.

Jump down to Rankings

To be ranked, a team must compete in one or more dual meets (defined as a scored meet between four or fewer teams) during the indoor season. Teams are ranked on wins and losses, marks, and strength and depth of dual meet schedule. Teams are rewarded for taking dual meet competition seriously.