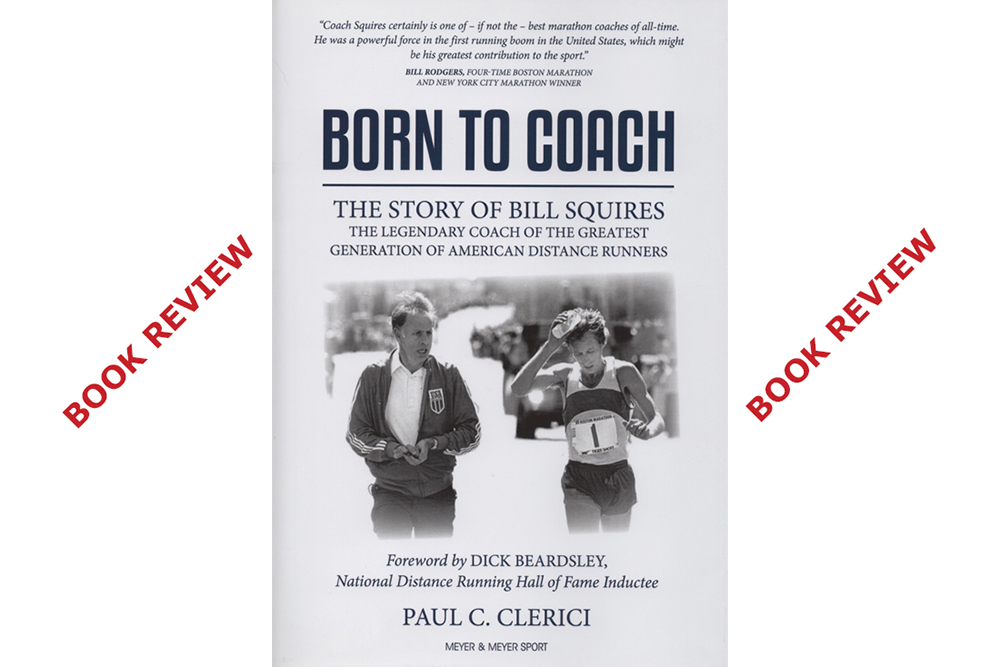 TRULY, BORN TO COACH. You may recall there was a not-so-far-past time when many of the big marathons—Boston, New York, etc.—were won by Americans. That was the 70’s and early 80’s, the apex of the American running boom, when runners like Bill Rodgers and Alberto Salazar, Greg Meyer and Dick Beardsley—and Frank Shorter—were marathon elite. All of those athletes (Shorter excluded) had at least one thing in common—they were all coached, to some degree, by one man, a New Englander named Bill Squires. His Greater Boston Track Club was at the eye of the distance running hurricane, sheltering and developing many of the top road runners of the day.

Born To Coach: The Story of Bill Squires, by Paul C. Clerici, is a new book which tells the Squires story. Many of the great coaches seem to be characters, idiosyncratic but inspirational, and Squires lines up alongside them: Lydiard, Cerutty, Bowerman—larger than life figures who may be a little bit nuts but they attract gifted athletes, instill confidence in their systems, and achieve great results. Squires was one of those coaching outliers who prospered right from the beginning—at the high school level and then at Boston State (later UMass Boston).

Big fish in a small pond was fine, but Bill, in recognition of the burgeoning interest in distance running in this country (Shorter had won the ’72 Olympic marathon), founded the GBTC in ’73, providing opportunity and training for post-collegiate runners and others. In just a few years due to the success of the club’s athletes, especially Bill Rodgers—and Squires’ growing coaching reputation—the GBTC assembled an unparalleled stable of running talent.

Clerici also writes of Squires’ own running career, first as a 3-time Massachusetts state champion in the mile and then as a multiple school record setter at Notre Dame in the ’50s, running success achieved despite a malformed heart and an accident in which he nearly severed a leg. I found it strange that the publisher devotes no attention as to how Squires became interested in the sport and how he became such an accomplished prep runner. In one chapter he has missed school due to his physical problems and was unable to play hockey and football. In the next he was the 3-time state champ, without preamble or explanation.

Quibble #2: Roger Bannister’s coach was Franz Stampfl, not Frank. #3: The publisher includes no stats or lists of accomplishments or honors for Squires or the GBTC at the end of the book, but there is an appendix with solicited quotes and anecdotes from various runners, officials and coaches. Randy Thomas’s remembrance is hilarious.

This hardcover title is available from amazon.com and www.thesportspublisher.com. The list price is $28.95.