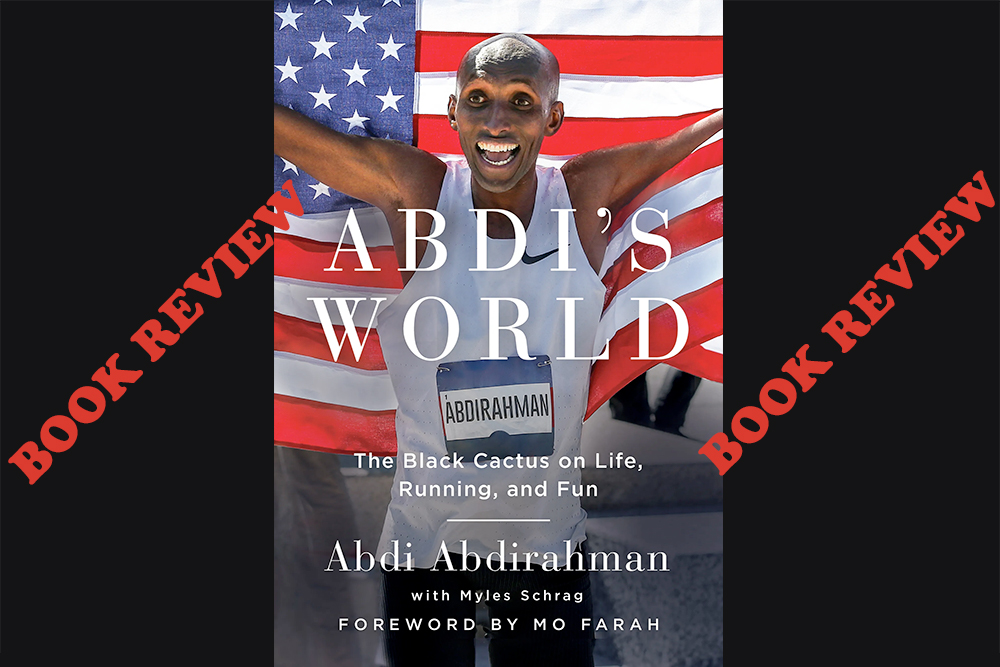 YOU KNOW THE STORY. The Abdirahman family fled the civil violence in their home country, Somalia, eventually to find a new life in the USA; their eldest son, Abdi Abdirahman, became a distance runner, one so proficient that he made 5 U.S. Olympic teams.

When a journalist asked him whether he and Meb (Keflezighi) were living the American dream, he answered, “Our experiences as immigrants motivate us… We know where we came from in life. We have a second breath. We talk about what we have accomplished, and we are grateful for the opportunity we have. We never take it for granted.”

That “second breath” is essentially what the new book, Abdi’s World: The Black Cactus on Life, Running, and Fun, is about. It’s Abdi’s take on life, on his love of running and competing, and the new positive life he created for himself in this country, a second breath. Abdi is listed as the author, “with Myles Schrag,” and the result is an enjoyable read for anyone interested in American distance running and/or the immigrant/refugee experience.

Abdi emerges as a garrulous, fun-loving personality, comfortable in his own skin, loyal to his friends, utterly committed to running excellence, and a proud citizen of his adopted country.

Many of his friends are African émigrés in the sport, like Bernard Lagat, Bashir Abdi (who finished 3rd in the recent Olympic marathon), Meb, Diane Nukuri. But the saddest chapter in the book deals with the unexpected death of his training partner, Ryan Shay, a loss that still confounds the running community.

Abdi offers tributes to his various coaches, particularly ex-Arizona coach Dave Murray (“my second father”), and to Joe Vigil and Bob Larson who worked with him at Mammoth, and to Mo Farah, who organized useful annual training trips to Ethiopia.

It’s all a good read, but if you’re looking for training tips, look elsewhere. Abdi is not one for detailed training schedules. Essentially this is the tale of any distance runner (except with much more success than most; he’s the only distance runner to make 5 U.S. Olympic teams, and at age 44 he ran a decent 2:18:27 in sweltering heat in Sapporo).

It’s an account of wins and losses, euphoria and disappointment, and the injuries that sideline you for days, weeks or even months. If you haven’t previously been a fan of Abdi Abdirahman, read the book and you’ll be converted.

The book is available from the publisher for $19.95: www.soulsticepublishing.com.