This article was originally published in the May, 1991, T&FN. The issue included a sequence of  Track At The Crossroads pieces, a deep dissection of troubles in the sport. 30 years ago! Much has changed, much has not. Food for thought. 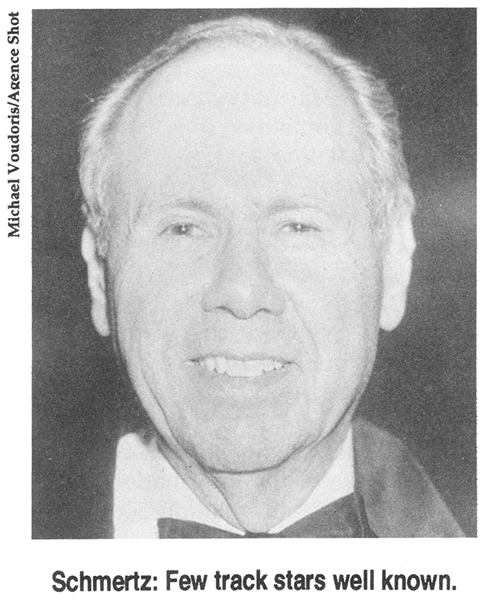 Want competition? Look no farther than the marketplace in which track is positioned. It’s not just the NFL, NBA, NHL, big league baseball and NCAA hoops. It’s also tennis, golf, beach volleyball; even monster truck challenges. These sports — and many more — promote themselves nationally with the aggressiveness of the high-stakes businesses they are.

But track? The years have seen payments to athletes rise from under the table, but little concerted effort has been made to move the sport beyond the cult status which in 1960 prompted A.J. Liebling of The New Yorker to compare its fans to opera buffs:

“They buy up all the tickets weeks in advance. As nobody else thinks of a track meet very long before it happens, the enthusiasts are the only ones who get there, and one of their chief prides is saying, afterward, that they saw some chap or other break a record. It’s as if they had once heard Tetrazzini sing Rigoletto.”

The difference today is that many of the tickets are not bought up. This year some 2000 seats sat empty at the 84th Millrose Games, as many former devotees opted to stay home. Fans who flocked to California relay meets 30 years ago now prefer the Dodgers, Lakers or Giants. Or their VCRs.

“I’ve got scrapbooks going way, way back,” says Howard Schmertz, who has directed Millrose for the past 17 years, since his father ended a 41-year stint as the meet’s promoter. “I read articles decrying the poor state of the sport all the way back to the ‘50s. This is nothing new.”

However, reminds Prefontaine Classic promoter Tom Jordan, “Twenty years ago at Candlestick Park they were having to bring in the Beach Boys to play at baseball games in an effort to get greater attendance. NBA basketball was once in severe trouble, and now both these things are setting attendance records.” Track, by contrast, has run in place, at best.

Why? “Because,” says Rich Perelman (press center director for the Los Angeles Olympics, and proponent of a U.S. track & field tour concept), “the sport, in my view, has not moved forward in terms of presentation and packaging.” Few dispute him here.

Track & field has, if anything, grown less comprehensible. Yards have given way to meters, and the slate of indoor events remains a confusing mixed bag.

The arrival of women’s track in the mainstream has been a welcome boon, yet it has stretched meet running times beyond the average fan’s attention span.

Records have been over-hyped, setting up fans for disappointment when they don’t happen. Meets all too often peter out instead of crescendoing with crowd-favorite races.

Collegians pursuing NCAA qualifying marks avoid the tight wooden ovals of the indoor invitational circuit. Then post-collegians skip the spring collegiate relay meets because they fall too early, being out of step with the European payday meets of July and August. The dollar’s decline has made U.S. talent a better buy for European promoters, while world stars want more money than U.S. meets can pay.

Instead of competing for a ranking, as tennis stars must, tracksters duck competition to preserve theirs. Haggles over appearance fees turn off spectators and provoke no-shows by athletes. There are few U.S. stars and even fewer heroes.

The net effect: potential fans lose interest, sponsors back off, and TV does not take track seriously.

The lesson track has missed, says Brad Hunt — agent to Joe Falcon, Mary Slaney and others — is that “we’re talking about entertainment. Coca-Cola doesn’t care if you’ve got a guy going over a hurdle or somebody singing a top pop hit. They want something that will help sell their product.”

Hunt argues that with the prospect of an American Olympics on the horizon for ‘96, now is the time to leave behind “the chariots of fire” and enter “the sports sponsorship/marketing generation.”

In modern marketing, Hunt says, “Your juggle is generally three different balls: your sponsor wants to know what kind of exposure it’s going to get; TV wants to know what athletes are coming to the meet; the athlete wants to know how much money he is going to be paid. While you’re juggling, if you keep these three balls in the air, you’ll usually come up with a deal.”

Some form of “tour concept,” it has been suggested, just might be a way to keep three balls aloft.

Perelman has received TAC’s cautious OK to at least explore starting one. His take on the idea would feature 16 meets, sold as a group to one title sponsor. It would be televised, at least initially, as part of TAC’s American Plan series on TBS. Athletes would receive prize money (but no appearance fees) on the circuit, which Perelman envisions as consisting largely of existing meets.

Promoters such as Schmertz and Sunkist showman Al Franken hold out hope that Perelman and his partner, a former Major League Baseball marketer, can land a Japanese company as title sponsor for $5 million.

But Perelman admits, “I don’t have money on the table, and I don’t want people to think that it’s either a done deal or a dead issue. It’s in process.”

The hope is that track & field could enjoy some fraction of the growth tennis saw 20 years ago. “Volvo got involved with tennis in the early ‘70s,” says Jordan, “and for a number of years they owned the sport.”

But TAC’s Ollan Cassell, chair of the IAAF Marketing Committee, cautions against emulating tennis, noting that track athletes, much more than tennis players or golfers, are only good for so many strong outings in a year before they tail off or break down.

Another concern, says Cassell, is that European broadcasters have complained lately that even that track-mad continent’s Grand Prix spectacle meets are all “too similar” to each other and do not project a sense of leading up to a seasonal climax.

Other doubters point out that track tours have been tried before. The ITA pro circuit of the ‘70s failed, but the hitch that its athletes could never compete against the best amateurs has been surmounted in the trust fund era.

In the late ‘80s, Hunt and his company, Advantage International, proposed a circuit idea. Though Hunt declines comment “on an idea which I still hope to revise,” both Jordan and Franken suggest a breakdown in negotiations with TAC stymied that plan.

“I think the difference now,” says Jordan, “might be that there are fewer stumbling blocks in terms of existing sponsors [object ing], in terms of meet directors wanting to be independent and go their own way.”

Among those in disagreement with one or more aspects of the “Perelman Plan” is Santa Monica TC agent Joe Douglas, who vows that his up-market stars will not compete for prize money alone, at least at the levels initially projected. Douglas also prefers putting any series after the TAC meet, closer to the European season so post-collegians can be ready to perform.

Currently the New York Games alone among major U.S. meets opts for a summer date. The meet has lost more than $300,000 in its two editions, and directors Fred Lebow and Allan Steinfeld pin some of their hopes for future profitability on the development of a summer loop of U.S. competitions.

Cassell says his hope is to fit more U.S. meets besides New York into the window between the European season’s two halves.

One Cassell proposal to bolster the U.S. summer season, by inviting European stars to the USOC’s Olympic Festival, was voted down by TAC’s membership, presumably in the interest of maintaining the meet as a venue for American up-and-comers.

America prides itself on a free market, and world track is increasingly just that. Athletes will follow the cash. Therefore, Hunt says, “It is imperative that we get a better handle on our star athletes,” to ensure the entertainment package is an attractive one.

To this end, Cassell, through his position on the IAAF Council, has proposed creating a position of IAAF Commissioner. This would be an official with the power to penalize athletes, agents and meet directors who renege on commitments. He’s pushing the same concept for the U.S.

To encourage strong performances, Cassell recommends a worldwide cap on appearance fees with the payout allowed each promoter to be based on stadium capacity. Prize money payments to athletes would be unlimited under the plan.

The ARRA circuit of major U.S. road races thrives by paying prize money only, but few dispute that the world’s Carl Lewises, like all name entertainers, will always merit some appearance money just for showing up.

Hunt’s advice is to buy athlete cooperation. When ITV purchased rights to British meets in the mid ‘80s, Hunt says, British of

This allowed Norman to make promises to ITV, which then lined up sponsors and packaged the meets as a weekly primetime broadcast viewers grew familiar with.

In other words, Hunt says, “Andy had the juggle going.”

“But,” counters Cassell, “you see in the evolution of what’s happened now, ITV has cut the number of events they’re doing in Great Britain in half. The complaint they’re making is they don’t have enough heroes, enough stars. They don’t have Coe, or Thompson, they don’t have an Ovett.”

Norman, Cassell says, has turned his attentions of late to creating contests between the national teams of various nations, an approach TAC is experimenting with in a few events at the ‘91 Mt. SAC and Florida Gatorade meets.

No matter the particulars of Britain’s promotional efforts, not an expert in America disagrees: the future lies in developing some very creative juggle. □