A SPRINTER MOVING FAST in her first full pro season at the tender age of 20, Sha’Carri Richardson has mixed lemonade with the rare and unusual opportunities available in this lemon of a year that nobody saw coming.

Inevitably, during her stepping-up campaign after a single phenomenal season at LSU, Richardson was going to need to confirm the bona fides established by her stunning pair of World Junior Records at the ’19 NCAA.

On a single day this August, Texas native Richardson—now coached by Dennis Mitchell in Clermont, Florida—passed the “it weren’t no fluke” test with flying colors, rolling out times of 10.95 and 22.00 to finish her brief summer in the company of Olympic gold medalists near the top of the year lists.

As of mid-September, only Jamaican greats Shelly-Ann Fraser-Pryce and Elaine Thompson-Herah are faster than Richardson’s 100 time on the year. And in the 200 she sits just 0.02 behind Shaunae Miller-Uibo’s 21.98 list leader with Thompson next in the compilation at 22.19. For Tokyo 2021, Richardson has sprinted inarguably into the mix.

Before her eye-opening day at the NCAA in Austin last year, Richardson was a yearling collegian with loads of promise, though, let’s be frank, fulfillment of said promise looked to be an eventuality, not an abrupt explosion. Sure, she had knocked out a pair of SEC wins, no mean feat for a frosh, and her times (11.00w/22.57) augured well.

But 10.75/22.17 in the span of some 45 minutes?! Not even Richardson saw that coming. “At the time?” she asks. “No; I was just going out there just looking at that day, at the races race-by-race. I just knew I had to go out there and run something really fast in order to place. Even just to place, let alone win. So those times, when they did drop I definitely was shocked just like everyone else.” The 200, especially, proved Richardson’s point. Her time may have clipped 0.01 from Allyson Felix’s U20 standard set at the ’04 Olympics, but it also left her 0.01 shy of winner Angie Annelus of USC.

Richardson turned pro 4 days later. She held form through the Stanford DL a couple of weeks after the NCAA and dashed a more-than-respectable 11.15 in finishing 4th and claiming the scalps of multiple previous World Rankers. By the USATF Champs at the end of July, however, she was toast. She represented best in Des Moines with her 100 semi clocking, 11.28, but otherwise showed it was time for her to regroup. 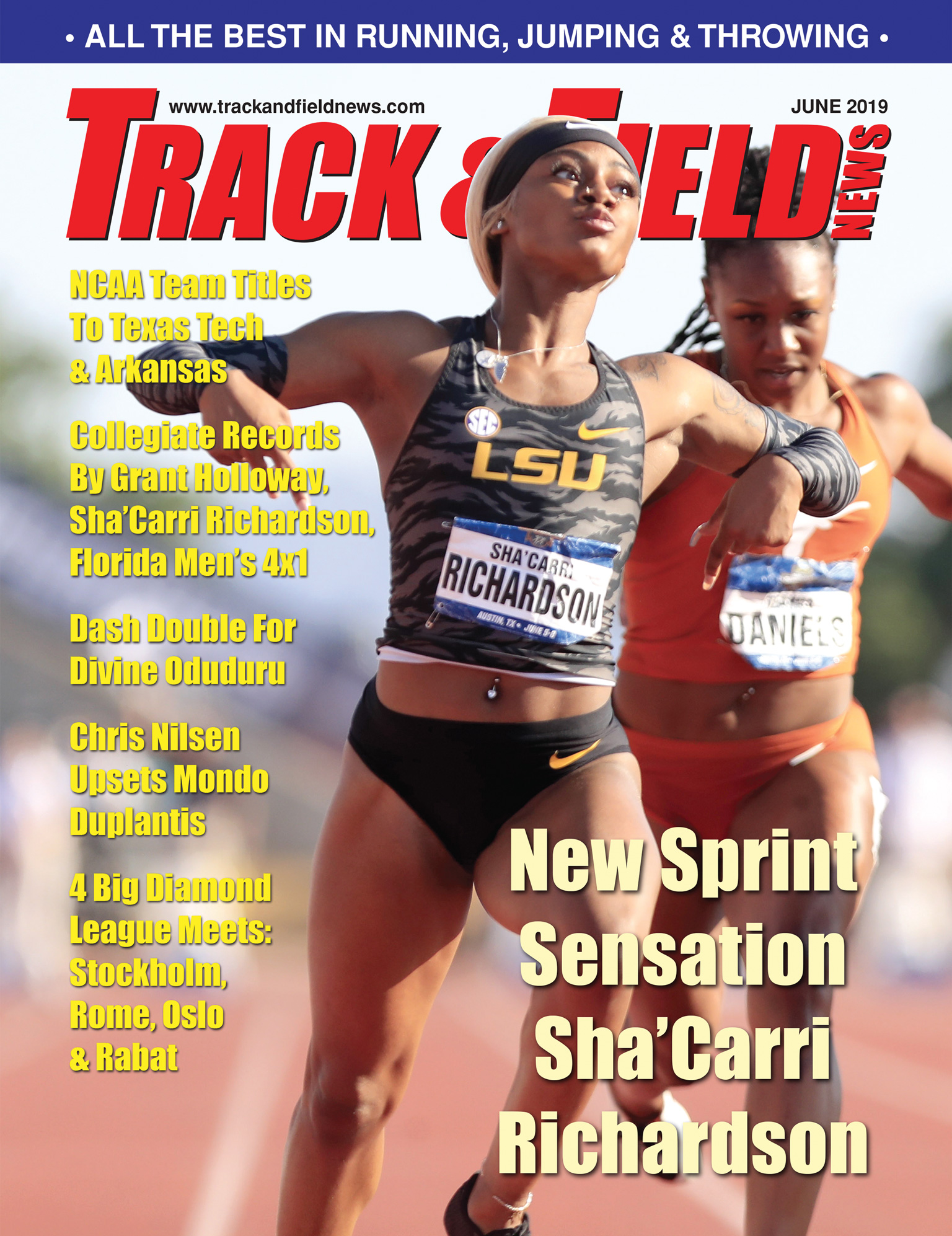 “Any time I step on the track, I’m going to try my best mentally and physically to put my best foot forward,” she says, reflecting on her first open nationals. “But I think it was being the fact that I was a freshman and I did have a phenomenal outdoor season that year—and being from Texas, we don’t necessarily have indoor. We’re not big fans of indoor. So [’19] was my first full indoor season along with the full outdoor season. So I think my body just reacted from that.”

The women’s dashes are forever a hot zone in the U.S. sport. Richardson knew she needed to return to rocking and rolling, and since joining Mitchell’s enclave in the fall of ’19 she has. Her short but sweet pandemic ’20 slate of competitions in Texas and Florida removed any doubts.

“The way that me and coach Dennis ended up crossing each other’s paths was after the Nationals at Drake,” Richardson explains. “Nike, myself and my agent—along with my manager—we all just sat down and we talked. That decision was made and I came down here and it has been a dynamic duo between me and him since then.”

One might think transitioning to the professional grind less than two years after leaving the prep level could be a rough ride, but Richardson feels she has been steeling herself for years now. A 3-time Texas State titlist for Carter HS (Dallas), she recorded prep bests of 11.28 and 23.28, and also placed 3rd in the ’17 USATF Junior 200.

“In high school, the reason why I was the athlete I was able to be,” she says, “is because I already set myself to train at a different level, to a different standard. So when I went to college, that standard was kind of the same. I really didn’t feel an actual transition. It’s a transition, of course, going to college, but I knew what to expect because already in high school I put that workload onto myself. So going into college, the workload wasn’t a shock to me. And transitioning from college to pro, this transition was probably the most uncomfortable transition I’ve had to make, but at the same time I feel like it’s the most rewarding transition I’ve made.

“Looking at everything, my running has changed, my times have dropped; me as a person, I’ve developed. So I just feel like the changes, they’re difficult, but they’re necessary.”

Even with a school year in steamy Louisiana to test her, Richardson says, “Florida weather, the heat, the humidity here kind of makes you have to tough-out working out.”

Of stepping into pro training, she says, “As much as I probably didn’t want to, I just trusted what my coach said and I just did whatever he advised me to do for the times and the development that I wanted for myself.”

Older athletes Mitchell works with have provided valuable mentorship. “In my coach’s group, before I came in he was training individuals such as Justin Gatlin, Aaron Brown, Isiah Young. Kyree King came in this year with me, as well. On the female side, he has Dezerea Bryant, he has Kaylin Whitney; he has Kortnei Johnson, one of the girls I used to run with at LSU.

“All of them are good runners but for advice about coaches or just advice about things in life, I will talk to Justin a lot or I will talk to Kyree. Those two individuals I think are what’s helped me the most in the transition of just being in this new realm of a professional.”

This year that means a professional in a pandemic. “I wanted to just get discouraged,” she admits, “but my coach wouldn’t allow me. He definitely was highly motivating during this time when we saw that meets were getting canceled and stuff like that. He looked more so on the positive side and kept encouraging us and kept influencing us. There would be some days we will come to practice and we’ll sit and talk just to make sure that everybody’s needs are met spiritually or in other aspects—not just on the track or about the track.”

As if a highly contagious virus were not enough for a young athlete to reckon with, there has also been the painful circumstance this year of police brutality and racism roiling through the national conversation. Richardson says, “Me being a proud Black woman in this country, I feel like it is completely unacceptable that we have to fight for the right of being able to walk down the street or drive in the car without being pulled over because of the color of our skin. I feel like this is a long, long necessary fight that we’ve been having to fight for so long.

“As athletes, people love to see us performing where we’re being their entertainment and we’re making them feel better. But where are these people when we need help, when we need assistance? When we need someone to be a force for us as well, there’s no one. So as far as the police brutality part, I’m always going to be a Black woman before anything and use my platform, donations, whatever I can to bring awareness.”

Richardson’s races this summer—8 serious outings packed into just 3 days over 5 weeks—took her into a happy realm of pure craftsmanship. She says, “I would say in those races I could feel just everything coming together at all sorts of different levels—and not even focusing on it. Just literally phase after phase. Like you get through one phase feeling fine in that phase, so just remembering how to transfer to the next phase, doing any adjustment that I have to do there so I can eventually just get down the track and be the first down the track, honestly.”

In 2021, rest assured, that elemental goal will not change.